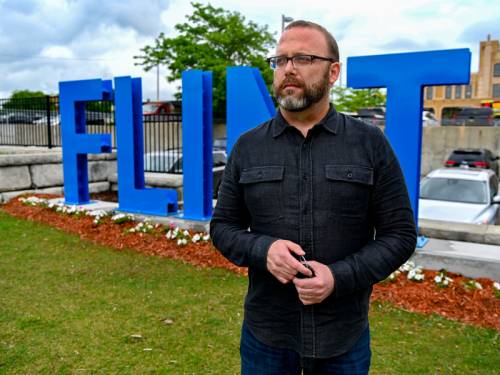 David Barnhart, photographed in Flint, Michigan, the day “Flint: The Poisoning of an American City” premiered. (Photo by Rich Copley)

“His work nurtures and nourishes,” the announcement of the award begins. “It transforms and redeems. It transcends the bounds of church and is having an impact on civil society. He has married theological resonance with civic duty, and faith with prophetic advocacy.”

Prior to McCormick, Barnhart had worked with children in therapeutic foster care and facing homelessness organizing drama and art therapy groups, and had also done community-based organizing work through Presbyterian Disaster Assistance in Mexico and Central America while studying journalism with a focus on documentary film. He then went to McCormick focusing on story as ministry on his way to earning a Master of Divinity in 2005.

“I learned that across the spectrum of this work there were common elements and themes that started to form a ministry that focused on ‘Story’ — both in terms of voices and stories being silenced/oppressed by systems, and the power and essential role of Story in challenging the dominant narratives that support these systems,” Barnhart said on Thursday.

Since seminary, Barnhart has made numerous feature-length and short documentaries covering varied topics such as gun violence (“Trigger: The Ripple Effect of Gun Violence,” 2012), immigration detention (“Locked in a Box,” 2015), refugee resettlement (“To Breathe Free,” 2017) and the impact of natural disasters (“Kepulihan: When the Waters Recede,” 2014).

For years, he has worked in tandem with editor and producer Scott Lansing, their latest full-length project being “Flint: The Poisoning of an American City,” which was released in 2019 and has won awards and been screened at film festivals across the country while also getting wider distribution on streaming platforms and cable television, surpassing one million streams on Amazon Prime. “Flint” has also been licensed by entities like the Environmental Protection Agency for training and education.

“Story and filmmaking are rooted in relationships, and we have seen that as this creative process unfolds, the circles of community support around a film grow, and the film becomes a resource from which to gather and hear those voices that have been silenced, humanize issues, make connections, and be a catalyst for wider community engagement,” Barnhart said. “Film and story are resources that can create space for truth telling and forging deeper levels of engagement.”

One of the distinctive features of Barnhart’s work from many ministry-based filmmakers is that his work is not about PDA, though the ministry’s staff and volunteers do sometimes appear in the films. But they are focused on the people and the issues he is documenting, telling stories in ways that can start conversations and inspire change around the world. 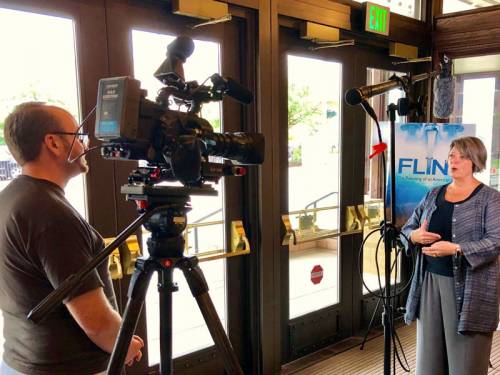 “Disaster response work, at its best, is not an application of charity and a brief expression of support following a catastrophic event,” said Rev. Dr. Laurie Kraus, Director of Presbyterian Disaster Assistance. “For traumatized survivors to heal, their stories must be able to be shared in a way that reconnects the ‘before’ with the ‘after.’  David’s work, like that of any good pastor or clinician, never re-traumatizes, but accompanies the survivor through the valley of the shadow and stands with them while the sharing of their narrative brings healing, justice, and renewal. To be able to do this through the medium of film, with such grace, kindness, and respect, is a unique and precious gift.”

Barnhart reflected on the many collaborators and colleagues past and present who have been part of Story Ministry.

“I am deeply honored to be chosen for McCormick Theological Seminary’s 2021 Distinguished Alumni award and share this with all the communities, community leaders, PC(USA) colleagues, and our creative team, who have collectively worked together to listen and lift up voices and stories that challenge dominant narratives and systems,” Barnhart said. “The McCormick community has been so formative in all of our work and this community of friends, educators, organizers, musicians, artists, and pastors has continued to be a source of support, insight, and learning.”

Give to One Great Hour of Sharing to enable Presbyterian Disaster Assistance to respond quickly to and tell the stories of catastrophic events.