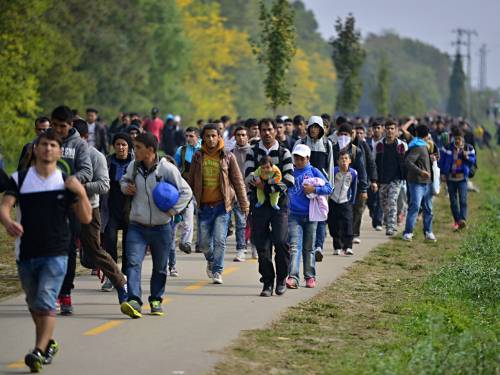 A number of Christian denominations have been working for years to receive families displaced by war and violence. In some cases, the churches have created interfaith partnerships to make the placement a reality.

“We are really blessed in that a synagogue shares our space,” said The Rev. Paul Lent, pastor of Freedom Plains United Presbyterian Church in Legrangeville, New York. “Both congregations felt the symbolism of a synagogue and a church jointly sponsoring a refugee Muslim family is a great American story and there are only a few places in the world where that could happen. We were very much looking forward to doing that and were very committed to it.”

Lent says his congregation is still digesting the executive order and its long-term impact on refugee resettlement. Other Presbyterian churches have expressed the same.

“We were preparing to receive a family within the next two or three months and had been working with Church World Service to make that happen,” said the Rev. Dr. Rick Sommers, pastor of First Presbyterian Church of Caldwell, New Jersey. “Then we received word from the service’s Jersey City office that the executive order had come down. At this point, we are in a waiting period.”

Sommers says his congregation was disappointed and disheartened, but not entirely surprised by the order.

“We were excited at the prospect of helping a family resettle. This congregation has done this back in the early 1960s when members helped settle a family from Cuba,” Sommers said. “So this is part of the church’s DNA and at least a significant segment of the congregation was looking forward to welcoming another one.”

“My congregation was not first on the list of receiving families, but we are waiting and expecting to be a co-sponsor with the synagogue,” said Lent. “We are actually larger than the synagogue and have considered taking on an additional family as well. All of that is on hold right now and still unclear.”

Cheryl Molina is an elder with Crossroads Presbyterian Church in Waterford, Connecticut. She has been working with a non-profit organization that has settled three families in the area since last June and they are hoping to host a fourth.

“I know there are those with a general uneasiness about hosting families. We rush around with work and our lives and we don’t connect with people as much as we use to,” she said. “I have found that the most amazing thing about refugee resettlement is that it requires us to slow down, to be in someone’s living room and personally see how they are doing. It’s like the old days when people used to connect by being in the same room.”

Rutgers Presbyterian Church of New York City has an active membership of 120. Members received good news on Sunday evening, that a Syrian family they had planned to sponsor, would be arriving on Tuesday.

“They were suppose to arrive on January 30th, but the executive order put that on hold,” said Laura Jervis, parish associate and teaching elder at the church. “We have been extremely busy over the last week advocating for them. We’ve had wonderful support from other churches and synagogues in the city.”

Jervis says ACLU attorneys will accompany them when they pick up the family. She adds that the process has helped bring diverse groups together for one cause.

“This has been extremely unifying for our city. I can’t say how heartening it is. It has been amazing,” she said. “Everyone has their own gifts to share. There’s no sense of competition or tension. We’ve all been working together to meet the urgent goal of getting the family here. Cooperation has just been extraordinary.”

The president’s executive order late last month suspended the admission of Syrian refugees from Syria, Iraq, Sudan, Iran, Somalia, Libya and Yemen. A week of protests and legal wrangling was capped off last Friday, when a Washington state federal judge blocked the ban.

“This isn’t political. It’s about helping people in need. Everybody understands when it is political, it is easy to make broad generalities,” said Lent. “But when you meet people and learn about their stories, it’s transforming.”

Woods Memorial Presbyterian Church in Severna Park, Maryland has helped settle families from overseas and had become close to a Syrian family that had lost their homes years ago.

“They went to Jordan to a refugee camp for four years total and had gone through extreme vetting. They had come to our area and asked for Maryland because the children have a medical condition,” said the Rev. Dr. Susan DeWyngaert, pastor. “They are not influential people. He was a construction worker but is currently working in a local grocery store stocking shelves.”

DeWyngaert says she’s happy her congregation stepped up. “They have been enriching us in many ways. They are a delightful family, exuberant and hard-working. They’re excited to be here and are building friendships and learning very fast.”

This is the ninth family Woods Memorial has sponsored in the past 10 years. DeWyngaert says members may not always agree on the issue, but moved ahead with the work.

“Our church decided to sponsor a family that needed us the most,” said DeWyngaert. “I think all of the concern melted away when everybody got to know this family because they were so lively, extraverted, funny, kind and grateful to be here.”

Many of the church leaders involved with the refugee ministry say they are as blessed as those they are serving.

“There are different ways for churches to get involved, from simply providing funds for the family or going all out to provide a home,” said Sommers. “It really depends on where the family is from. We were in the process of trying to help Church World Service locate housing for a family. The level of our involvement would depend on their level of need.”

Sommers’ advice to other churches, is to keep working, keep pushing.

“Don’t lose hope. Continue to be an active voice for the vulnerable, the marginalized, the stranger and immigrant in your community,” said Sommers. “Keep the faith that Jesus calls us to reach out and serve the most vulnerable. The widow and the orphan are the ones we are called to serve.”

“It’s a great way to reduce fear and see refugees as families,” said Molina. “They’re people just like you and me and it’s a great way to avoid political rhetoric and get to know them, learn about their culture and religion.”

A prayer for refugees:
http://pda.pcusa.org/pda/resource/Prayer-after-restriction-of-refugees/