LOUISVILLE — In the words and experience of the Rev. Jim Moseley, executive presbyter of New Castle Presbytery, “Every great effort in ministry requires both strategic thinking and ‘daring’ in equal amounts.”

And maybe just a few peaches. 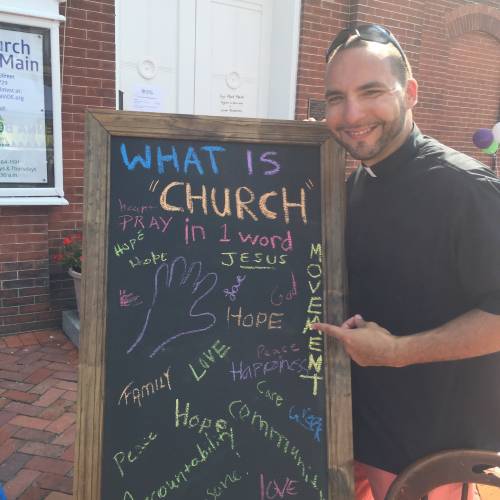 Because it was in large part thanks to peaches—specifically the 23rd Annual Middletown Old-Tyme Peach Festival—that the Church on Main, a new worshiping community in Middletown, Delaware, was front and center in the heart of the community’s historic downtown district on Saturday, August 20.

Dressed in peach-colored shorts and wearing a clerical collar for the first time in his ministry, the Rev. Fernando Rodríguez Quiñones, Church on Main’s organizing pastor, was determined to show Middletown’s residents—and some 20,000 visitors—that something new, exciting, and different had been launched on the site of the former Forest Presbyterian Church, which was formally dissolved by the presbytery in February 2016.

“Forest was a congregation that had steadily declined in membership and struggled for many years,” said Rodríguez Quiñones of the former church, which closed after 266 years. “When only a small group was gathering for worship, the session asked the presbytery to get involved. After the presbytery tried a couple of models, they formed an administrative commission, which called me. Shortly after my arrival, it was clear that we needed to dissolve Forest to do something new from this space.”

Moseley said that in welcoming Rodríguez Quiñones into New Castle Presbytery, they received “a person of many gifts and talents who would focus on growing a radically diverse and decidedly missional fellowship.”

And not only did the presbytery receive Rodríguez Quiñones, but multiple congregations and presbytery entities also greeted him with tremendous support and generous funding in order to begin to build the new ministry upon many of the strengths that were already there.

“The connection with the Peach Festival really was ‘transferred’ from the old Forest Church because some of its members were involved in planning it,” he said, “and thanks to the presbytery’s involvement and financial support, we have been able to fix up the building and show people all of the renovations.” 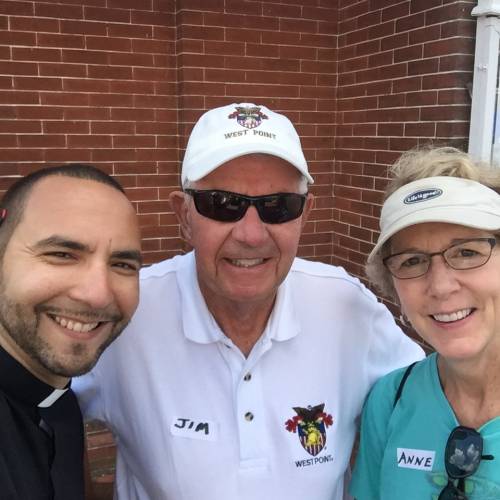 During the daylong Peach Festival, Rodríguez Quiñones and a team of volunteers from across the presbytery—including members of the former Forest Church—invited hundreds of people into the church’s air-conditioned comfort, sold peach ice cream and water for the visitors’ refreshment, and handed out lightly-frozen towels with Church on Main’s logo and website. Volunteers also distributed information on the new worshiping community’s first of three “preview” services—scheduled monthly in August, September, and October—which was held the very next Saturday, August 27, at 5:00 p.m., and attracted about 20 people, a few from the day of the festival.

“The preview services are planned at non-traditional times to kind of give the people a sense of who we are and what we are going to be, but they are also designed for us to listen to the people,” Rodríguez Quiñones said. “We’re reaching out to see how we can best serve the community and make an impact by exploring what it would look like if God moved into the neighborhood. It’s not about being ‘crazy missional,’ as I define it, but it is about ‘presence’ and getting the word out that there is something happening here.”

Church on Main has three guiding principles, which form the acronym C.O.M.—community-driven, open, and meaningful—and which also happens to stand for Church on Main.

“We are focused on building community, being community, serving community,” he said. “We are open in the sense of being open to all people from all backgrounds, sexual orientation, gender, and economic status; and we’re meaningful in the sense that we’re not a ‘dog and pony show’ or an entertainment center. We are trying to have meaningful experiences spiritually as we serve, as we worship.”

And the community has indeed started to take notice of the Church on Main, not just of the ongoing physical and cosmetic changes to the church building, about which Rodríguez Quiñones said “people get really amped up,” but also of Rodríguez Quiñones’s growing community involvement and outreach.

“One of the first decisions we made was to partner with an organization called Friendship House, based in Wilmington, Del., which was looking to expand into Middletown, one of the fastest-growing communities and soon to be the most populated town in the state,” he said. “There’s development all over the place. 15 years ago this place was all farmland; fast forward to today and the population has grown from 5,000 to 30,000 in 10-15 years. Middletown, on the surface, doesn’t look like a place that would need social services basics, however growth spurs different things. Friendship House, because it’s an organization that primarily deals with serving people experiencing homelessness, saw an opportunity to expand into Middletown given the growth and the need for it, even in a place like Middletown.”

Rodríguez Quiñones, who also serves as the presbytery’s Innovator for Emerging Ministries, is always out and about making valuable connections for his ministry both at Church on Main and in assisting congregations, committees, fellowships, and commissions across the presbytery explore and dream of missional opportunities.

“I joined the Chamber of Commerce and the local Rotary club,” he said. “I’ve met several pastors and have become a part of the ministerial alliance in town.” 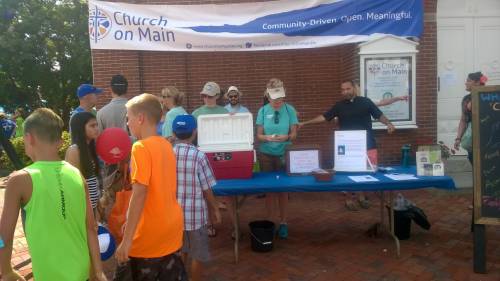 Volunteers at the Church on Main sell water and distribute information during the Aug. 20 Peach Festival (Photo provided)

Rodríguez Quiñones laughed about his having worn peach-colored shorts on the day of the festival. He said that one of his colleagues—upon hearing that he would be a judge for the festival’s parade—told Rodríguez Quiñones that “he should wear a clerical collar with some really cool pants, because it’s not expected.”

“I did get several comments about the whole attire thing,” he said.

Both Rodríguez Quiñones and Moseley are optimistic about the future.

“In Fernando, we were seeking—and we found—a person who would speak to and for the work of the presbytery, helping us to grow our witness to Jesus Christ; who would preach, teach, consult, and advocate for immigrant and emergent ministries; and who would move us beyond membership to see the work of the church through different lenses leading us to greater diversity,” Moseley said.

In May, the Church on Main received a seed grant of $7,500 from the Presbyterian Mission Agency’s 1001 New Worshiping Communities initiative. “We’re pretty excited to see what God does through this all,” said Rodríguez Quiñones.

But at the end of the day the question remains, does Rodríguez Quiñones even like peaches?

“It’s not something that I dream about, but sure!” he said. “The funny thing is that the harvest wasn’t all that great this year, but we call the Peach Festival a great success. We had a chance to connect with a lot of people, show them that we’re here and that we’re doing something different and new. We’re happy about that.”