This article originally appeared in the November December 2016 edition of Presbyterians Today. 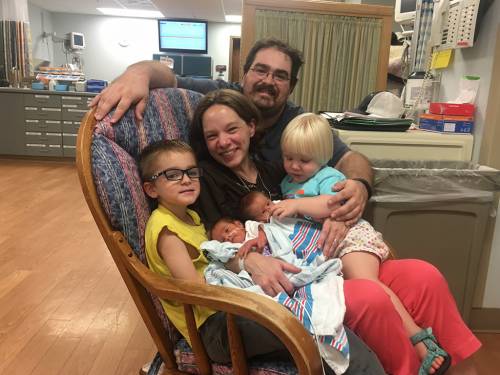 Having twins meant Janis and Joel Montgomery suddenly needed a bigger car and another set of baby equipment. They are grateful for the help from family and friends as will as the Missouri churches they pastor, Currysville Presbyterian (hers) and First Presbyterian Church of Vandalia (his).

Who could be more vulnerable than a young girl in first-century Palestine, unmarried, and told that she is soon to be the mother of the Son of God? Who could feel more helpless than a young man who discovers that his soon-to-be wife has been made pregnant through the Holy Spirit? The Nativity story is full of vulnerability, reflecting the delicate nature of life and how small we humans really are amid the powers of poverty, corrupt oligarchy, and societal expectations. And yet, this is how God’s Word comes to us.

Mary receives unexpected news and responds with astonished acceptance. And Joseph, sort of a father and almost a husband, begins to create a home and a life for his family, when suddenly he is told he must travel over 70 miles with his very pregnant wife in order to register for the governor’s census, which will record their poor and precarious situation. While there, this vulnerable couple find themselves homeless and alone in the night. And then they become parents.

Often, the new experience of becoming parents sends us to our knees, propels us into community, and has us asking for help in ways we never thought we would.

As Advent approaches and we contemplate the Incarnation, the Rev. Dr. Susan Kendall says we are invited to see Mary and Joseph as parents, as models for the human condition. Kendall is director of doctoral studies at Drew University Theological School, a feminist scholar, mother, and grandmother.

Becoming a parent is jolting, overwhelming, and scary. Caring for a child every day becomes tedious and exhausting. When the Rev. Emily McGinley first became a mother, simply persevering through the daily activities of life took its toll.

“Parents find themselves functioning on their backup generator,” McGinley, site pastor of the Hyde Park-Woodlawn Urban Village Church in Chicago, says. “The practical realities of life take precedent; our daily bread comes in very literal ways. I need God to show up in the most basic ways possible!” she says. 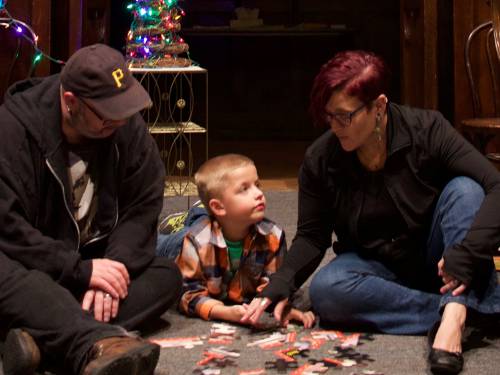 Heather Vallone of Sixth Presbyterian Church in Pittsburgh says a huge and holy love has grown between her son, Dante, and her current husband, Chris McDonald.

Becoming a parent is a change that creeps into every aspect of life, 24/7, waking or sleeping, working or at home. Even the mundane cycle of caring for the physical and emotional needs of children while trying to balance work and life can feel like enormous pressure.

Kate Davoli, a mother of two, discovered that opinions of the “right” and the “wrong” way of parenting could be found around every corner.

“Parental judgment can be found everywhere, but Jesus offers grace and compassion,” she says.

Heather Vallone believes that when her husband adopted her seven-year-old son, God’s hand was directly involved.

“There is a huge, messy, insane love between my now husband and his adopted child that I cannot describe as anything but holy. I didn’t go into it as a spiritual journey or act, but now that I’m in it, I can see the ways spirituality and God are at work,” Vallone says.

When Beth Creps became a mother to her now three- and six-year-old boys, she found that her usual anxieties multiplied. She needed to rely on God’s grace more than she ever thought she would.

“My need for grace and mercy has become very real, very tangible, and very urgent. I have understood in new ways what it means to feel the redemptive gift of unconditional forgiveness, because I see my mistakes in the wide, loud openness of my relationships with my small children,” she says.

Transitioning to parenthood is a challenge for all kinds of parents. This is especially so when the opportunity to become parents seems precarious at best. But the lessons learned can be extraordinary.

When the Rev. Ben Robbins’s baby was born prematurely, he discovered that looking far into the future was too scary, too overwhelming for him and his wife. Terrified they might lose their baby, they dealt with the situation minute by minute, discovering that when people brought casseroles, or prayed from hundreds of miles away, or just sat with them in the quiet neonatal ICU room, God was present with them, and they were given the strength to live through the next moment. It was a grace experienced through the ministry of presence during that vulnerable time. And this grace then creates a desire to pass that grace on.

“Now I have a desire to expose my son to holiness. Music, favorite books, watching the fan spin on the ceiling—these small things become holy. Exposing him to what’s good becomes an amazing privilege,” says Robbins.

The fear of losing a child is also often present for adoptive parents. When Rasheed Newson of Los Angeles and his husband began the process of adopting their daughter, they felt that they were at the mercy of the legal system, and that as a biracial same-sex couple, the odds were against them.

“You’ve got to stay rock steady. You pray because you’re often so powerless, afraid, and desperate. Prayers of thanks and gratitude are in the mix, but the bulk of the prayers are calling for divine intercession,” says Newson.

Zach Hoover, executive director of LA Voice PICO (People Improving Community through Organizing), has had a similar experience in the foster-to-adopt process of his son. As he held his tiny, special needs foster child in his arms, he came to a new realization of what it means to be a child of God.

“I realized this is like how powerless and small and in need I am to God as Father, God as parent. I’m so much more aware of the limitations of our power and how much we must rely on others and on the Holy Spirit to truly sustain us,” he says.

So what is a person to do when parenthood changes life so dramatically?

“Lean into it,” says Sarah Bessey.

Bessey, author of Jesus Feminist and a mother of four, believes that vulnerability isn’t something to be avoided; rather, it is a foundational element in growing in our faith.

“When I feel that profound sense of vulnerability, rather than resisting it, I’ve learned to make friends with it and lean into it, see what it has to teach me, what I need to pay attention to. Vulnerability doesn’t mean we need to be afraid; I have found it gives me strength and courage,” she says.

The Incarnation in the everyday

Becoming a parent can make the Incarnation real. New parents learn that God is ever-present in the everyday activities of life, as they wake up and make the breakfast, as they wipe the tears and kiss the scrapes, as they pay the bills and pray with their children and ask for help again and again. Many times, parents receive grace from God, not through dramatic flashes of insight or intense moments of devotion, but through the simple daily tasks of caring for their children. This brings us to the very heart of who we are as Christians.

As Mary and Joseph went through the life-altering experience of becoming parents, they experienced the grace of God in the mundane slow trod of a donkey, the straw in the stable, and the embodied experience of giving birth. In the midst of uncertainty, they participated in making the Incarnation possible. This is the vulnerable grace of parenting. Their story reveals God’s grace for all of us, parents or no, as it comes to us in the common motions of everyday life.

Jennifer Frayer-Griggs is the Table minister and pastor at Hot Metal Bridge Faith Community in Pittsburgh and mother of two boys, Jonah (7) and Levi (3).