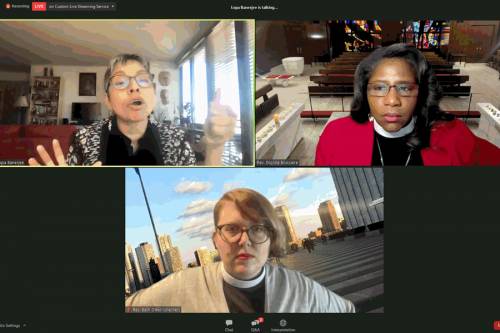 Lopa Banerjee (clockwise from top left), the Chief of the Civil Society Section at UN Women; the Rev. Dionne P. Boissiere, Chaplain of the Church Center for the United Nations and the Rev. Beth Olker of Presbyterian Racial Equity & Women’s Intercultural ministries during the Q&A section of Banerjee’s address to the Ecumenical Women orientation. (Screenshot)

LEXINGTON, Kentucky — Members of a joint delegation comprised of individuals from the Presbyterian Church (U.S.A.) and Presbyterian Women participated in orientation events this weekend for the 65th United Nations Commission on the Status of Women (CSW), which will be held virtually for two weeks starting Monday.

But the 65th edition of the event is set to virtually replicate a live commission as much as possible, including UN meetings, such as a Tuesday town hall with UN Secretary General António Guterres, and parallel events, including a Presbyterian program March 23. The Presbyterian portion of the commission usually starts with a Friday night gathering of Presbyterian delegates and a Saturday morning meeting of Ecumenical Women at the UN, which did happen online over the weekend.

Friday’s Presbyterian orientation included overviews of the event, the Presbyterian Ministry at the United Nations and Presbyterian Women, as well as the sharing of communion. 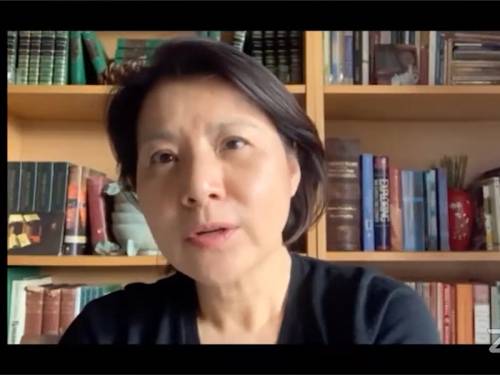 Sue Rheem, Presbyterian Representative to the United Nations, addresses the Ecumenical Women orientation to the 65th Annual UN Commission on the Status of Women. (Screenshot)

Welcoming the women, Sue Rheem, the PC(USA) representative at the United Nations, lamented that this year’s event would be limited in terms of one-on-one interaction because it is virtual. “We will not be able to have impromptu conversations in the hallways or go out and grab coffee or have lunch in our small office space,” she said. However, “we are trying to make this experience as engaging, as impactful, and maybe, life changing as well, so may the seeds that are sown at CSW65 bear fruit and multiply.”

Breakout sessions during Friday’s event gave participants from PC(USA) and Presbyterian Women a chance to get to know each other and to express their thoughts about what the next two weeks will bring. Participants also learned there will be regular times for Presbyterians to gather together, including virtual drop-in lunch sessions each day, akin to live CSW where delegates often showed up in the PMUN offices between meetings.

“Every time I attend CSW, it is an eye-opening experience to hear and listen to …  the women from all over the world and to hear about the priority theme that they always have every year and what people all over the world are doing in respect to equality and equity for gender justice towards women,” McRae said. “For me, it is a transformative experience, and everything I learn and engage, I try to share with others, so this has been a wonderful experience for me within the last four times that I have attended CSW.”

During the Friday orientation, some participants expressed concern about how well they would be able to master CSW65’s virtual format. While relating to that, Kay Woods of Three Rivers Community Presbyterian Church in California expressed optimism that delegates ultimately would make the best of the situation.

“I think that our issues with the technology are sort of akin to the issues we experienced in New York City at the UN, which was pretty wild, I’m telling you,” said Woods, a returning participant. “Which room? Which floor? Where to go out in the community? … But we shared those things with everybody. And I think we’re going to have to do that with our technology — to come together whenever and say, ‘Here’s what I learned about how to get from one event to the next, effectively.’”

The Ecumenical Women at the UN orientation generally gives participants their first glimpse at the scale of the commission, as it gathers many of the faith groups that will participate, including Lutherans, the United Church of Christ, the Episcopal Church, United Methodist Women, the Salvation Army, World Council of Churches and more. 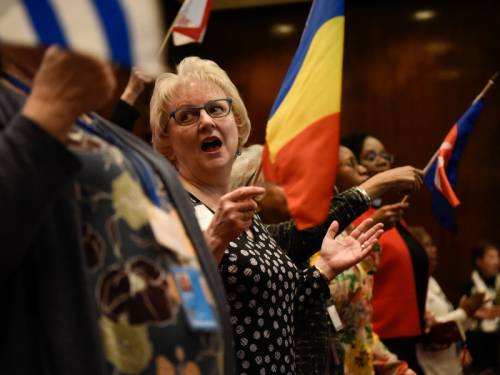 The Rev. Dionne P. Boissiere, Chaplain of the Church Center for the United Nations, presided over the three-hour orientation with significant help from several Presbyterian representatives including the Rev. Beth Olker of RE&WIM and Joy Durrant, Presbyterian Women Vice-Moderator for Justice and Peace Concerns.

Like Friday, there were worship elements to the Ecumenical Women orientation, though there was a lot of discussion of the central theme of this year’s commission: “Women’s full and effective participation and decision-making in public life, as well as the elimination of violence, for achieving gender equality and the empowerment of all women and girls.”

Lopa Banerjee, the Chief of the Civil Society Section at UN Women, greeted the delegations acknowledging the death and grief the world has endured in the past year of the COVID-19 pandemic and acknowledging the work it has highlighted that needs to be done on behalf of women.

The orientation was also addressed by a global panel of thought leaders on issues of women’s representation, particularly within churches, and sent with the story of Deborah from Judges 4:4-10 and singing “Siyahamba,” the South African hymn that says, “We are walking in the light of God.”

“So come, come to this table, and clear anything from your heart and mind that may pull you out of this holy space,” she continued. “Come and receive this gift of God’s grace, knowing that as you eat, as you drink, as you glance around the screen at the fellow travelers with whom you have gathered tonight, and for such a time as this, that all glory, honor and praise belongs to God.”