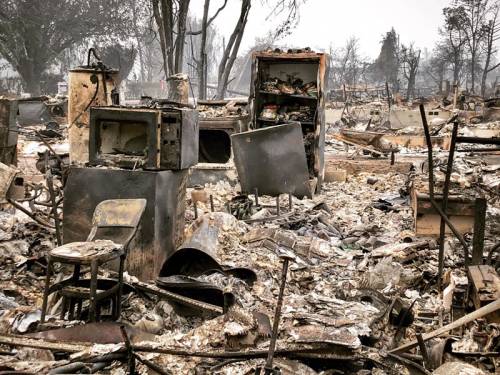 Authorities have confirmed that 2,357 homes were destroyed and over 100 businesses in Talent, Oregon. Cate Battles / Argosy Odyssey. Used with permission

LEXINGTON, Ky. — The Rev. Clark Scalera keeps running into this roadblock when giving an update on the impact of wildfires in Oregon’s Presbytery of the Cascades.

“We can’t get close to see if there’s any damage,” said Scalera, the presbytery’s Advocate for Congregations and Clergy, discussing a specific church building and giving a variation of a statement he made several times during a Thursday afternoon call.

It is hard to get assessments of the damage from a disaster that is still unfolding, cutting off access to structures with walls of flames and making the air itself so dangerously thick with smoke it is not safe to go outside without a professional face mask. Right now, Oregon and Cascades Presbytery find themselves the flashpoint in a western wildfire season that is lasting longer and spreading wider than anyone can remember.

“In 10 years, I have never been called to a fire in Oregon,” says Mike Bullard, a member of Presbyterian Disaster Assistance (PDA)’s National Response Team who has been virtually deployed to Cascades Presbytery to assist with its fire response.

Fires rage in Oregon. Left: This photo of Sexton Mountain shows how smoke has blanketed most of western and central Oregon for at least a week and a half, so far. Center: Grants Pass, in western Oregon. Right: The sun is visible only briefly under the heavy smoke. Steve Parker

If it was not for the COVID-19 pandemic, Bullard said he would be in Oregon to assist. But due to a travel ban for Presbyterian Church (U.S.A.) business, PDA is only doing virtual deployments at the moment, so Bullard is helping Cascades navigate various aspects from response from grant requests to FEMA declarations to practical advice from his Northern Idaho home.

But Bullard, who also works with the Red Cross and Idaho Voluntary Organizations Active in Disaster, has worked plenty of fires and has a collection of battered N95 masks to prove it. 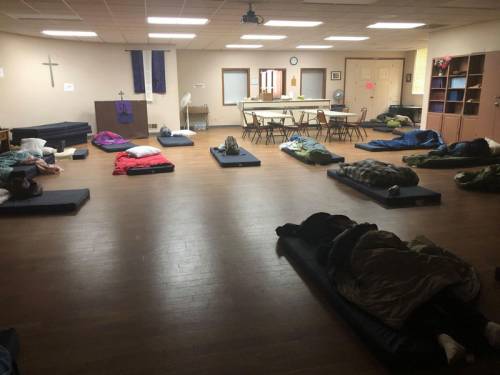 First Presbyterian Church of Medford set up a temporary shelter for people displaced by the nearby Almeda fire in Phoenix and Talent, Ore. Murray Richmond

“I have been amazed by what can be accomplished by a virtual deployment,” said Jim Kirk, PDA’s Associate for Disaster Response in the U.S. “Our National Volunteers have stepped up and adapted so that PDA can continue to offer (virtual) ministry of presence to presbytery and congregational leadership impacted by a disaster.”

Scalera said that in recent years people in Oregon have watched as wildfires emerged from Southern California to Northern California and are now impacting numerous western states, including Washington, Colorado, Utah and Montana. Now they are the reality for Cascades Presbytery, as some churches deal with the impact of the fires on their property and communities while others are working to help with needs such as shelter and evacuation support. Thus far, Scalera said they are not aware of any churches being lost, though some may have been damaged, and they are aware of several dozen families in the presbytery that have lost homes. 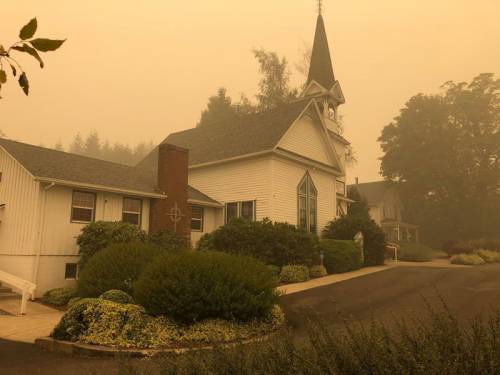 Springfield Presbyterian Church, near Estacada, Ore., was threatened by one of the largest two fires in Oregon but is safe, so far. Tim Guttridge

“We’re trying to lay in the infrastructure to help with the reconstruction phase, once it gets started,” Scalera said.

The massive scale of the fires and their destruction means that the presbytery and its communities are facing a long road to recovery, Bullard said.

“When this happens, it’s not just the people’s homes,” Bullard said. “It affects businesses, it affects jobs that will just be gone.

“The longer a disaster takes to develop, the longer it will take to recover. PDA is focused on helping people in the long term.”

The best thing both Scalera and Bullard said people can do to help is make financial contributions to PDA, which will work with the impacted communities to get funds to the places and used for the things that are most needed. Already Scalera says he is appreciative that PDA was proactive contacting the presbytery as the situation unfolded to offer assistance and guidance along the way. Several times during Thursday’s call, Scalera and Bullard discussed details of their collaborative response.

“It’s moments like this I give thanks for the connectional nature of the Presbyterian Church,” Scalera said. “That family of faith is so important.”