After the Presbytery of San Jose was struck by two fires, Presbyterian Disaster Assistance offers support 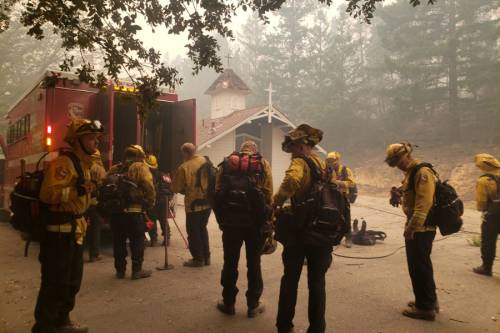 Firefighters gather in front of Bonny Doon Presbyterian Church in the Presbytery of San Jose on Aug. 21. The church sustained minor damage in a wildfire. (Photo from Cal Fire CZA)

LEXINGTON, Kentucky — Whenever a disaster strikes, the Rev. Erica Rader does three things: she gives to Presbyterian Disaster Assistance (PDA), she gives to a food bank in the impacted area, and she prays.

Now she is finding out what those gifts to PDA are supporting.

Rader is the Stated Clerk of Presbytery of San Jose, which like many places in California is in the midst of responding to wildfires that are once again ravaging the Golden State.

“Our presbytery is probably a good example for others that haven’t had a task force at the ready to work with PDA,” Rader said last week. “I’ve just been so impressed by Jim Kirk and his team, Suzanne Malloy, that they’ve just met us where we are. … They’ve been so knowledgeable, so grace filled, with the fact we haven’t had a ready-to-go team.”

Rev. Kirk is PDA’s Associate for National Disaster Response and Rev. Malloy is a member of PDA’s National Response Team based in Santa Barbara who’s virtually responding to the Presbytery of San Jose, which has also received an initial assistance grant from PDA.

“Presbyterians have once again stepped up to meet the needs” said Kirk. “Often a presbytery disaster task force is formed after a specific event, such as this fire. Once formed, the task force continues past the disaster to help with preparedness and response for future events.”

Rader said of PDA, “They help us explore our strengths to engage with and love our neighbors, to start with an assessment of where we’re at, bring us kind of up to speed with how to engage with other volunteer communities, other organizations. When your presbytery is affected, it’s really gratifying to see that they step in to help you where you are to move forward.”

The Presbytery of San Jose is just south of San Francisco, stretching from Palo Alto south to Monterey, including Santa Clara, Santa Cruz and Monterey counties. Rader says the primary impacts in the presbytery have been the SCU Fire that has burned nearly 400,000 acres toward the mountains and the CZU Fire, which has burned more than 86,000 acres near the coast.

Rader says one church, Bonny Doon Presbyterian Church northwest of Santa Cruz, has sustained damage from the fire, and about a half-dozen families have lost homes to the blazes. She describes the area Bonny Doon is in as a close-knit “hamlet” in the Santa Cruz Mountains that is “probably a bit harder to get in and out of” and will be facing an extended recovery from the fire.

That community is the primary specific issue the presbytery is addressing, though she said they are generally addressing needs such as food banks and other support agencies. 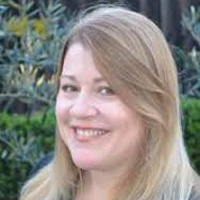 “Right now the issue of feeding people seems to be the biggest overlap with where we’ve been serving and what’s needed now,” Rader said. “This feels like an extension of how we work on justice issues, how we work on other issues.”

All responses are going through the filter of the COVID-19 pandemic. Rader said that because of the pandemic, usual responses to disasters that involve a lot of personal contact have been altered. For instance, she said local officials are housing evacuees in hotel rooms instead of school gyms or other facilities typically used for disaster response. The home to nearly 40 million people, California currently has the most confirmed cases of COVID-19 in the United States at just under 750,000.

While dealing with the pandemic during a natural disaster is new territory, wildfires are sadly becoming all too familiar in California, Rader and Kirk said. According the Los Angeles Times, there were 42 active fires in California on Wednesday, and the SCU fire was the largest, burning since Aug. 18. In addition to California blazes, PDA is monitoring wildfire activity in other western states including Oregon, Washington, Utah, Montana, and Colorado.

“It used to be late fall, because that’s when you had the driest conditions and winds,” Rader said of what was traditionally the most difficult weeks of the fire season in the West. “But this weather system that came through with the lightning — that is what caused this. They call them lightning-complex fires — that was very unseasonable for us.”

She said being coastal, the San Jose area usually enjoys a more humid environment favorable to agriculture, as opposed to the hot, dry weather the region has recently experienced. Observing that October is usually the driest month of the year, she said, “We’ve got a way to go.”

Whether the presbytery experiences more wildfires, damage is already done, and for the people impacted, there’s a long road ahead to recovery.

For that, the Presbytery of San Jose is working with PDA to discern how to move forward and create a disaster response team ready to take on the next situation which, given California’s recent history, seems to be a matter of not if, but when.

Rader said, “PDA is going to be a big part of us exploring and living into our calling.”