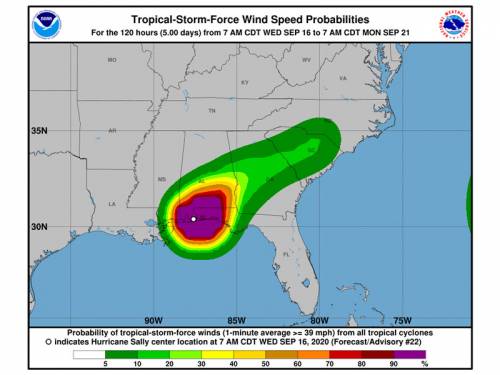 “It looks like it is going to be incredibly impactful, with significant rain, flooding and storm surge,” said the Rev. Jim Kirk, PDA Associate for National Disaster Response.

The storm was initially expected to strike around New Orleans on Monday night, but it slowed and drifted east, largely sparing Louisiana and Mississippi.

Sally came ashore in Gulf Shores, Alabama, around 4:45 a.m. local time Wednesday as a Category 2 storm with sustained winds of up to 105 mph. The storm is said to moving as slowly as 2 mph, giving it plenty of time to dump feet of rain — Pensacola, Florida, is already reporting 30 inches of rain from the storm.

Kirk said that with the storm still raging and difficulties such as power outages, it is too early to begin getting assessments of damage. He said PDA staff is closely monitoring the Presbytery of Florida, the Presbytery of South Alabama and Flint River Presbytery in southwestern Georgia. Kirk said that as the storm was approaching, PDA contacted presbyteries from Louisiana to Florida to make them aware of resources that were available, including grants and staff support.

“Today we will be reaching out and trying to connect,” Kirk said, noting it will probably take days to get a full assessment, particularly because “flooding is a multi-day event as waters flow south.”

It was only two years ago that the Florida Panhandle and South Georgia were devastated by Hurricane Michael, the first Category 5 storm to make landfall in the United States since 1992. when Michael struck Mexico Beach, Florida, on Oct. 10, 2018.

“We are still doing recovery work from Michael,” Kirk said.

So far, 2020 has not had a monster storm like Michael to draw the nation’s attention. But the collective impact of Sally, Laura, Isaias and Hanna is adding up in the United States, Kirk said.

“Sally is yet one more storm that has collectively impacted thousands of people and homes,” Kirk said. “There are still people in Louisiana without power from Laura.

“Because areas impacted are so vast and multiple numbers of mid councils (synods and presbyteries) are involved, making a gift can really make an impact.”

You can make a gift to Presbyterian Disaster Assistance’s hurricane response by clicking here.

As PDA awaits word from Florida and Alabama, Kirk also looks warily at the Atlantic Ocean, where six other tropical systems are forming, two of which are poised to impact the United States.