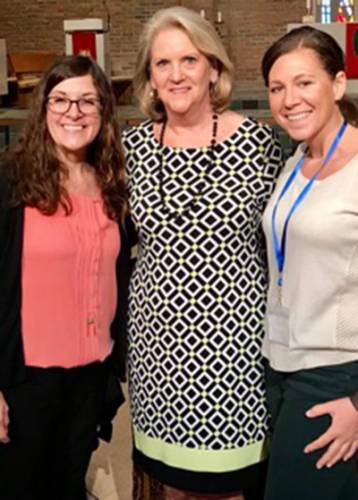 LOUISVILLE – Michele Hendrix remembers the moment her life changed. Floating above her hospital bed, she saw her beloved pastor at Grace Presbyterian Church in Houston, praying for her. She was just 33 years old.

“It wasn’t a beautiful story,” she says now. “I was kind of suspended in time. Watching the sadness of my husband, with our four-year-old twins — a boy and a girl — and six-year-old daughter, feeling that kind of sorrow.”

Hendrix, now 65, is president of Presbyterian Older Adult Ministry Network (POAMN). She survived that three-week hospital stay in 1985, when doctors discovered a tumor on her bladder. She also had “blood clots in her lungs and pneumonia.

Having experienced emotionally what dying might be like, Hendrix no longer took any day for granted. Her personal mission became “making Jesus visible” by doing everything could to make a difference, by “smiling at the face of an older person in the grocery store” or “stopping to talk with a homeless person.”

She also began volunteering at her home church, Grace Presbyterian, in older adult ministries. Eventually she was named Director and Pastoral Care Assistant for the ministry.

“I could relate to the struggle we all face in the journey of life, from birth to death,” she says. “The loss that came with my feeling of being suspended in time helped me see both the beauty and challenge of ministering to older adults.”

Hendrix calls those 20 years of service in ministry to older adults “a gift” because she began to see that “with age comes wisdom, with wisdom comes grace, with grace comes acceptance and with acceptance comes understanding.”

Hendrix shared some of what she’s learned in Older Adult Ministry at the recent 7th International Conference on Ageing and Spirituality at Concordia University in Chicago. During the conference, which POAMN helped sponsor, Hendrix co-led an experiential session,“The Church as a ‘Go to Place’ for Caregivers.” She argues passionately for the church to come up with a compassionate response to challenges facing aging populations, their families and society. By 2030, it’s estimated 72.8 million adults — 20 percent of U.S. residents — will be 65 or older. Most PC(USA) members are in this category.

“I talked about how older adults are going through so many losses,” says Hendrix. “Including the loss of their church. When they can no longer walk inside its walls, they feel disposable.”

Hendrix hears from those who are hurting, including entire families who usually go to their home congregations for help. Those churches often come to POAMN for assistance.

“Our time has come,” says Hendrix. “Everything POAMN does is mission for the church. We believe it is wise to prepare all ages, and all generations to navigate this journey of life together.”

It’s what she learned in the moment when she thought her time had come — and in her call to serve in older adult ministries. At Grace, more than 800 senior adults, and 800 baby boomers were under her care.

“It was critical for us to have someone we could relate to, someone to empower and equip us for the different phases on the journey aging,” she says. “Together we learned how to develop ministries, and resources to meet completely differently needs and interest of multiple generations.

“It is special and sacred to minister and learn from those who often are the most vulnerable, the most fragile and the most frightened.”

The Evangelism area of Theology, Formation and Evangelism (TFE) at the Presbyterian Church (U.S.A.) serves as a liaison to POAMN. Associate Director of the ministry Ray Jones also attended the international conference on Ageing and Spirituality.

“What a privilege to be with POAMN — to have such a great learning opportunity,” says Jones. “I’m discovering they’re making a difference in congregational life, helping older adults grow in discipleship in ministry beyond retirement, and helping intergenerational populations better deal with losses that come with the aging process.”