Board members are no longer officers of PC(USA) A Corporation 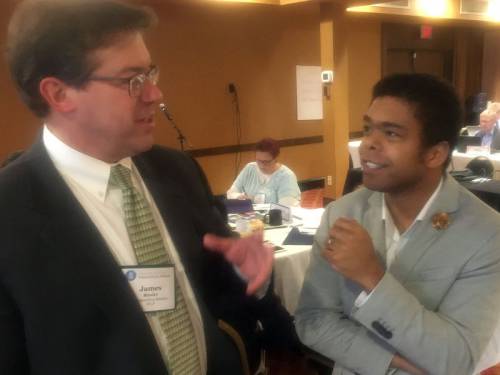 The Rev. Joe Morrow (right), chair of the Presbyterian Mission Agency Board, talks with Jim Rissler, a corresponding member of the board. Paul Seebeck

Morrow acknowledged that the board is embarking on a new season and chapter in their work together — in a time of change for the denomination and the world.

“At first, it might feel like we’re in a construction zone,” he said. “Building something new can be untidy and messy.”

While in the “construction zone,” Morrow told the board he hoped they would be fully educated on the issues the PMA is working on.

“I want this board to become a model of deep faithful discernment — so that we can be advocates not only for the board but for the agency’s mission.”

Following Morrow’s report, Moffett spoke of how grateful she is for the board, including its new leadership and new members. Acknowledging that it is a “critical time in our denomination,” she said that she is “pressing the reset button” and that she will evaluate the mission agency’s work by “how we are impacting the lives of those who need the gospel most.”

“God calls us to act boldly and compassionately so that the world wakes up to new possibilities,” she said. “This is what drives our work, as we work together collaboratively.”

The board also received greetings from the Rev. Dr. J. Herbert Nelson, II, the Stated Clerk of the General Assembly of the Presbyterian Church (U.S.A.).

“People, we are called to turn our world upside down,” Nelson said. “In the 21st century, there is a new reality for the PC(USA). Our call is to work together — as we do this, let us remember we have the hand of the One who promised never to leave us alone.”

Both Nelson and the newly elected Co-Moderators of the 223rd General Assembly, Ruling Elder Vilmarie Cintrón-Olivieri and the Rev. Cindy Kohlmann, gave thanks to the board for the opportunity to be with them in continuting dialogue of how the church can work more broadly to meet new challenges facing the denomination.

The board also recognized its new members (see below) and heard from Native American minister the Rev. Judith Wellington of Surprise, Arizona. She referenced Jeremiah 10:12–13, which speaks of how God made the earth with power — and founded it with wisdom.

Referring to recent superstorms — Typhoon Mangkhut in the Philippines and Hurricane Florence in the Carolinas — which brought incredibly fast wind and dreadfully slow-moving rain, she called the created world “God’s gift to us.”

“God gives us a choice, regarding creation, but Jesus wants to reconcile us to our created environment,” she said. “Surely, if we can be reconciled with one another, we ought to be reconciled in right relationship to the earth.”

After worship, Morrow acknowledged the Shawnee, Cherokee and Chickasaw tribes, giving thanks to God “for those who walked and cared for the land before us.”

This fulfilled the 223rd General Assembly mandate related to the Doctrine of Discovery, which acknowledges those on whose land the group is meeting. The practice is to take place during meetings of all agencies of the PC(USA).

After hearing reports from the Coordinating and Personnel and Nominating Committees, the board held its first community conversation on the Presbyterian Mission Agency’s work plan, which emphasizes poverty, racism/white supremacy and congregational vitality.

The board’s ministerial team and task force will hold their first meetings Thursday night. The board meetings will continue on Friday morning, with opening devotions at the Presbyterian Center Chapel led by the Rev. Denise Anderson, who will also lead the board through cultural humility training.

Anderson, the former co-moderator of the 222nd General Assembly (2016), is the new coordinator for racial and intercultural justice — working with PMA’s Compassion, Peace & Justice and Racial Equity & Women’s Intercultural Ministries.

The board’s resource and allocation committee will meet on Friday morning to review the latest financial reports of Stony Point, a PC(USA) conference center just outside of New York — while getting a Stony Point update from Moffett and Mike Miller, acting senior director of Shared Services and CFO for the PC(USA) A Corporation.

The committee will also hear from the Stony Point Round Table, which PMA Theology, Formation and Evangelism acting director Ray Jones helped put together. It includes representatives from communications, legal, the A Corporation and human resources.

“We’re working with the leadership of Stony Point on their business/ministry plan, so that they are more fully integrated into the life of the PMA and on a path of sustainability,” Jones said.