Report will be forwarded to the 2020 General Assembly for consideration 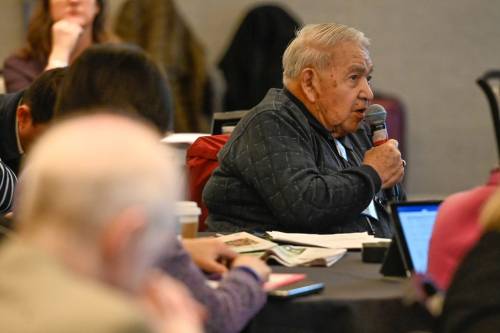 The Rev. Cecil Corbett, a member of the Presbyterian Mission Agency Board, speaks during consideration of a Native American church property report Friday. (Photo by Rich Copley)

BALTIMORE — The Presbyterian Mission Agency heard a report  Friday detailing repairs that need to be done on 92 Native American churches in 16 presbyteries, most of them in the West.

The report is in response to a 2018 GA referral. Some of the inventoried properties are no longer serving as worshiping communities or are uninhabited.

The presbytery in whose bounds a local congregation resides is the body that works with a congregation when it is unable to maintain its property or has property issues. “In many cases,” the report states, “the property is leased to the Presbyterian Church by a Native nation or tribe. And while the church session has some degree of authority, they must be mindful of the fact that the land is generally not land owned by the church, so they are subject to tribal laws and policies.” 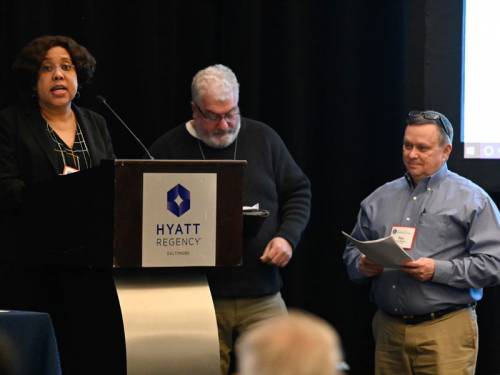 According to the report, the 92 Native American churches in the PC(USA) stretch from Shinnecock on Long Island, New York to Neah Bay, Washington, and from the Alabama-Coushatta lands in Livingston, Texas, to the territory of the Inupiaq at Point Barrow, Alaska.

To date, 89 of the 92 churches or chapels have been inventoried. Twenty-four of the facilities are in the Presbytery of the Grand Canyon, while 19 are in Dakota Presbytery.

The report states that nearly $5 million worth of repairs requiring a general contractor are needed among the inventoried churches and chapels. Another $3.7 million in repairs could be completed by volunteers or by self-contracted sources.

The Rev. Cecil Corbett, a PMA Board member from Lapwai, Idaho, and one of two Native American members of the board, asked the board to direct the Rev. Dr. Diane Moffett, president and executive director of the PMA, to consider employing a national staff person conversant in modern construction methods and new housing products. Moffett will report back to the board during its April meeting on any progress she makes.

Issues of power and privilege 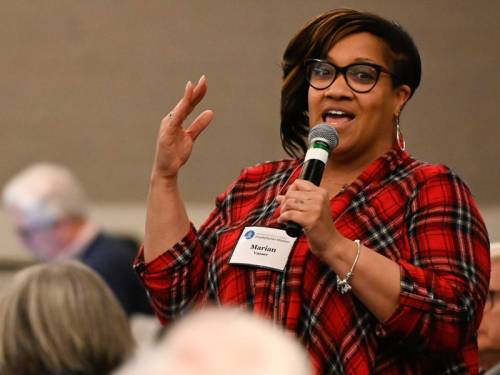 Dr. Marian Vasser, whom the Presbyterian Mission Agency Board hired to consult on power and privilege issues, addresses the board near the end of Friday’s meeting. (Photo by Rich Copley)

Dr. Marian Vasser, director of Diversity Education & Inclusive Excellence at the University of Louisville, is the consultant the board has hired to observe the climate of the room during board meetings, including who does a majority of the speaking, the body language employed — even who sits where.

As she did during the board’s previous meeting, Vasser noted that staff members sit in the back of the room while the board occupies the front.

“It’s noticeably different in the back of the room,” she said. “Staff is clearly a critical part of the work that you do. They present, and then they return to the back of the room. I can’t tell you how to change your structure, but when you ask about power dynamics, that one is really significant.”

She also suggested that managers and directors not refer to “my staff” or “our staff” when referring to the employees they manage. Call them “colleague” or “team member” — or, better yet, call them by name, she said. “They seem like little things, but they mean a lot,” she said.

She said she observed board members and others disengaging when what can be difficult topics like white privilege are being discussed. “Some people completely disengaged. I saw some people walk out,” she said. “Your body language says a lot. People do read that, and it was enough for me to notice.”

Asked by board co-chair the Rev. Warren Lesane to assign the board a grade, Vasser demurred. “I would ask you to grade yourself,” she said.

But she didn’t hold back talking about people’s access to the microphone.

“The people who tend to hog the airtime ask a lot of follow-up questions, and that tends to be men,” she said. “I’m going to leave it right there.”

Dismissing about 10 minutes ahead of schedule Friday, the board voted to switch both the dates and the location of its fall meeting, which will now be held Oct. 7-9 at the Stony Point Center in New York.