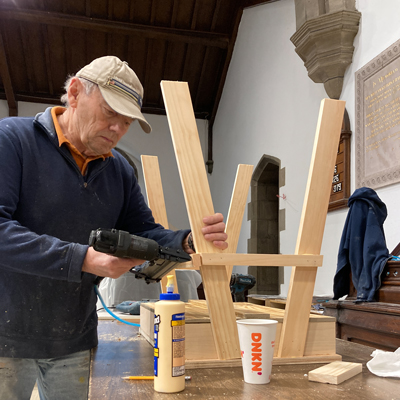 Jim Ferguson, who will be 85 at the end of April, is very involved in volunteer work with Habitat for Humanity PresbyBuild projects in the Hudson River Presbytery. The longtime Calvary Presbyterian Church member in Newburgh, New York got the idea to build a modified version of the student desks from a video he saw on YouTube. Each desk has nine pieces of wood to assemble. (Photo by Kate Clarke)

LOUISVILLE — Jim Ferguson of Calvary Presbyterian Church in Newburgh, New York was recently checking out a do-it-yourself project on YouTube. Nothing unusual for him, since he is a long-time volunteer with the Habitat for Humanity PresbyBuild group in Hudson River Presbytery. The group is currently working on its 10th house and has raised almost enough funds for house 11.

Yet, this off-to-the-side video of a smiling man standing next to a plywood desk got Ferguson’s attention. He remembers thinking, “I wonder what that’s about?”

Clicking on the video, Ferguson learned that the desks, which looked pretty simple to him, were being built to help students have a dedicated workspace at home during the pandemic, a place of their own for virtual learning.

“Yeah, we can do that,” Ferguson said aloud, having a pretty good idea of what was involved in making a desk. He began working on modifications and improvements to the design to add stability. Then he built at least three versions of the desk to show to Calvary’s session.

“I got session’s approval for 30 desks,” said Ferguson, adding he thought they’d receive maybe five or six requests for the My D.E.S.K. Mission. The acronym stands for Dedicated Education Space for Kids.

To match the desks up with students in need, Ferguson reached out to Kate Clarke, a Calvary member and president of the Parent-Teacher Organization at Horizons-on-the-Hudson Elementary School in Newburgh, located one block east of the church. Some students have been working on the floor, on their bed, trying to balance everything in their laps, she said. 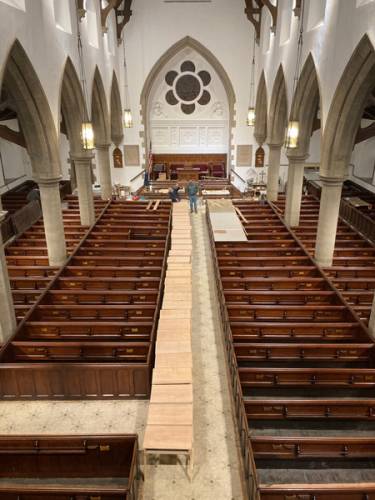 Thirty handmade wooden desks line the aisle at Calvary Presbyterian Church in Newburgh, New York. The mission project was all about finding a way to help young students and their families by providing a dedicated space for at-home virtual learning. (Photo by Kate Clarke)

Clarke created a Google form and sent it to all the teachers, who shared the form with the families. “Immediately we had a response for 28 desks,” Clarke said. “So we knew there truly was a need.” Clarke helped with the assembly, which took four days but would have taken much longer if not for the planning and prep work organized by Ferguson in the days and weeks before assembly week.

“We came in and Jim had done all the prep work. The thing I think that’s the hardest when you’re building something is the measuring, and he did all that for us. The wood was pre-cut. It was in sections. He had jigs set up so we could just flip the desks over and they’d be the right height to glue on the side pieces. He made a lot of that really easy on us.”

Clarke calls Ferguson “Mr. Calvary,” she said. “I say Jim’s the reason we attend Calvary because we moved to the area eight years ago and during the Newburgh Illuminated Festival, Calvary was hosting one of the stations. Our church was the first church illuminated in New York, by [Thomas] Edison himself. He hardwired the lights. So, we went to go check this out, and Jim was there and he greeted us and he told us about the lights, of course, and he was so friendly and so welcoming. We felt just this warm sense in that building. He even let my husband go up and ring the bell! It was so funny. We were like, ‘This guy’s awesome.’ Then we picked up one of the little pamphlets that says, ‘Our doors are open.’ And we were like, ‘This is like a neat place.’ So we came back that Sunday or the next, and we never left. So, I say, Jim is the reason. He’s like the Calvary historian, and he’s just a really great guy.” 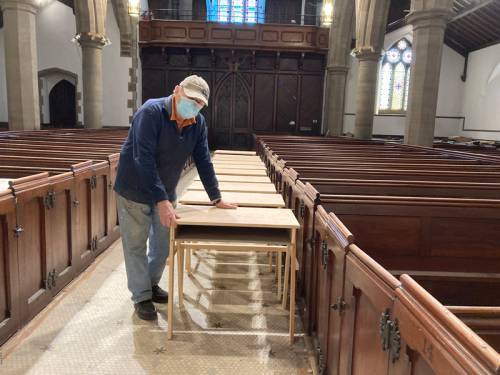 Ferguson worked 13 years as an auto mechanic, where he learned to use wrenches and screwdrivers, of course, all the mechanical skills. At age 30, he spent a year working with his cousin who owned a cabinet shop and manufactured roof trusses. It was very detailed work. He also worked for many years with the Central Hudson Public Utility, which encouraged and supported community volunteer work. He’s been retired more than two decades now, but his wife tells him, “You may have retired, but you never stopped working.”

“And I don’t want to stop,” Ferguson said.

About the desk design, Clarke said there were a few prototypes, even a collapsible version for families that might not have the space for a permanent desk. “It wasn’t a full ‘go’ on that one,” she said. As for size, they polled the parents to ask if they would prefer a 16” or 18” desk. More than 80% responded that they would prefer the larger desk, so they decided to do a one-size desk to simplify assembly. 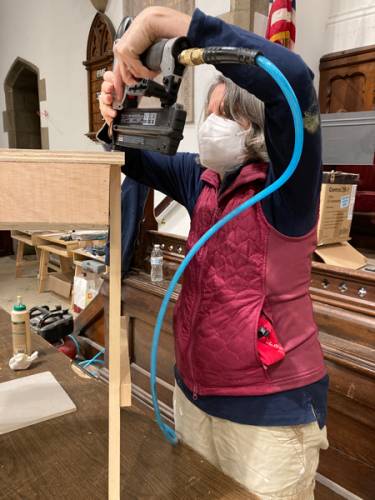 At one point there was thought of having a paint party, where kids could paint their own desks, but COVID restrictions and also the idea of transporting the desks, which had to be done upside down, sideways, squished between seats in some vehicles, made it too complicated to paint them prior to distribution.

“So, we are leaving the painting and decorating of the desks up to the families and the kids,” Clarke said. “And that’s the point — to make it their own. It’s their desk, their space.”

Ferguson said once session approved, he sent out a letter to the friends and members of Calvary, describing the mission project. “I told them this is not a letter asking for donations.” Instead, he explained how important it is to keep up the offering during the pandemic. Funding for the project to buy the materials would be coming from the annual budget mission line item, so he just wanted to let them know that maintaining the weekly offering is appreciated. 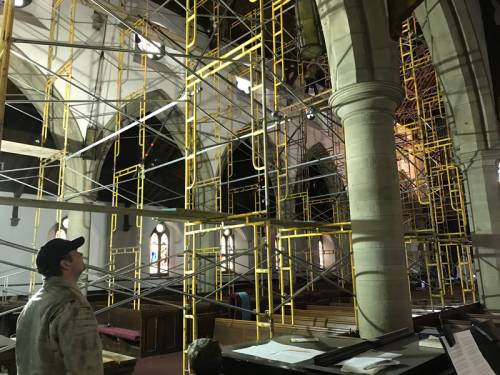 Belfor Property Restoration of Calvary Presbyterian Church, after a two-alarm fire in early March 2020 that demolished the fellowship hall and caused extensive smoke damage to the sanctuary, is expected to be complete by year’s end. (Photo by Kate Clarke)

Even though Calvary Presbyterian is still recovering from a two-alarm fire in early March 2020, the congregation was ready for a Love Thy Neighbor project, Ferguson said.

Belfor Property Restoration, the company doing the fire restoration, donated half the plywood needed for the desk-building project. McNeilly Wood Products donated the cutting of the plywood, using a new machine purchased the week prior.

Ferguson’s nephew helped him load the plywood into his van to deliver for cutting. The employee who unloaded it with a forklift was a Habitat homeowner who lives around the corner from the church and whose children have attended Horizons-on-the-Hudson Elementary.

“It started to get a little emotional,” Ferguson said. “He was so happy to be able to help somebody.”

Once the wood was cut, Ferguson began to set up the sanctuary as a contemporary woodworking shop. He brought in his saw, someone donated another saw and they were ready to go. About six core people spent the better part of two weeks doing the construction. 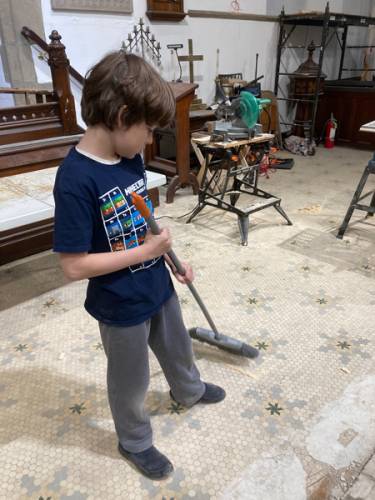 Carter Clarke helps with cleanup in the sanctuary during the My D.E.S.K. Mission (Dedicated Education Space for Kids) project in March.

During desk assembly, one volunteer asked Ferguson, “Why are you using a level on the desk?” He answered, “Why shouldn’t I?” The volunteer said, “The pencils won’t roll off.” Then he asked, “Are you going to stick gum on the bottom of the desks?”

“It was a fun time,” Ferguson said of the joking around and fellowship while building the desks in the sanctuary.

“I feel very blessed to be able to do this in my hometown.”

The restoration of the church will be a blessing in the long run, Ferguson said. “We took the opportunity to replace all the wiring and switch to LED lighting.” Because the sanctuary floor wouldn’t support a motorized device, they had to put scaffolding all the way to the top of the rafters.

“So that gave us a chance to clean the rafters that hadn’t been cleaned since 1858,” Ferguson said. “They were a little bit dusty, you know?”