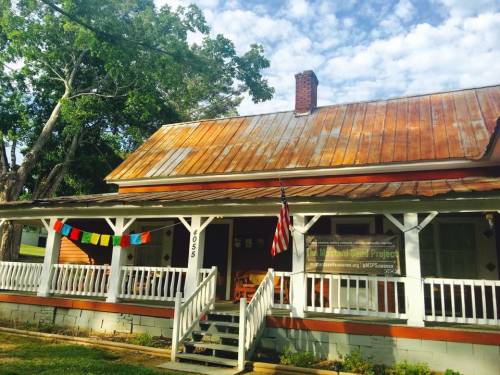 LOUISVILLE – The way Mark Roberson sees it, it was Roswell Presbyterian Church’s turn to plant a church.

Roberson, a ruling elder for over 50 years—18 of those at Roswell—knew more than just a little about church planting. He’d worked with the Presbytery of Greater Atlanta’s New Church Development Commission (NCDC), and in 2011 he just knew it was Roswell’s time.

“We had done some very exciting mission projects both locally, in terms of affordable housing, and internationally,” Roberson says, “but since we had come to a conclusion on some of those initiatives that were in a maintenance mode, our pastor, Lane Alderman, said, ‘We need a new big thing that will excite the congregation.’ Out of that came this question, ‘Why don’t we plant a church? We’ve never done that.’”

And just like that, the seed—that would eventually take root toward as The Mustard Seed Project—was planted.

Roswell immediately formed an exploratory group at the church to initiate the investigation. Roberson and fellow church member, Jerry Bowden, and others, along with the church’s associate pastor for Mission Outreach, the Rev. Mary Cox, and the Rev. Sara Hayden—who was then the director of the presbytery’s NCDC and is now director of Apprenticeships and Residencies for the Presbyterian Mission Agency’s 1001 New Worshiping Communities initiative—were charged with finding the right place to plant a church, how to fund it, and overall what to do.

When Roberson started to realize that the church’s exploration was getting serious, he knew that the congregation would be concerned for their pastor, the Rev. Lane Alderman, who had been battling cancer since 2000 with a recent recurrence in 2009-2010.

“I said to Lane the first question that the congregation is going to ask you is whether or not you’re up to this,” Roberson recalls. “And what Lane told me was, ‘I take it day by day, and today I am. There’s no better legacy that I would like to leave than planting a church.’”

In moving the church’s vision closer to reality, the first thing that Roswell did was establish a business plan that called for the Roswell Church to support the new worshiping community for five years. Roswell then launched a fundraising campaign—over, above, and separate from the church’s operating budget—to raise the money to fund the new church plant.

“We ran a campaign with a goal of $800,000,” Roberson says. “In two months, we raised $715,000 in either donations or pledges. We chose not to apply for any grants of any kind, believing that there were folks who needed that money and we didn’t.”

Roberson says that the church was not disappointed not to have immediately raised the full $800,000.

“Our business plan called for $600,000,” he explains. “The remaining $200,000 was to be seed money for the next church after that. Lane’s philosophy was that this is what we needed to be doing. We need to be reaching out, and we need to spread the good news through planting churches—this is what we’re going to be focused on and known for.”

To bring that mission home, Alderman—who died earlier this year—started a sermon series in 2013 all about the religious “nones,” centered on a young atheist whom he called “Phil,” in order to help the congregation embrace the vision of starting a new worshiping community with the mission of reaching out to a growing segment of the population whose beliefs are just like Phil’s. As the Presbytery of Greater Atlanta described it, the church plant would be “a new church that would look, sound, act, and feel different and perhaps connect well with people like Phil.”

With the congregation now primed and a site for the new worshiping community selected in Suwanee, Georgia—after first having evaluated seven different, possible communities in the northern arc of Atlanta—the church formed a search committee in 2014 to call a pastor.

At nearly that same time, the Rev. Zac Morton—who was content in his first call as associate pastor of First Presbyterian Church of Manhattan, Kansas—was attending CREDO, a conference designed and sponsored by the Board of Pensions of the Presbyterian Church (U.S.A.) to help PC(USA) teaching elders cultivate their spiritual, vocational, health, and financial well-being, as well as their leadership potential.

“It was at that conference when I first started to think that I might like to do church planting,” Morton says. “It had never been on my radar before, but when I went to the conference, I met Tara Bulger, who was friends with Sara Hayden [of 1001] in Greater Atlanta. Tara said there’s this cool thing called the Mustard Seed Project in Atlanta; I’ll give you the information.”

Soon after learning about the project, however, Morton put the thought aside. When some months later he logged in to the Church Leadership Connection—the PC(USA)’s internet-based matching and referral system—strictly “to see what was out there in the church planting world,” he was soon matched with Roswell Presbyterian Church for its Mustard Seed Project.

In October of 2014, Morton was called and installed as associate pastor at Roswell—where he spent his first six months—with missional responsibility solely for The Mustard Seed Project.

“Zac preached, he was involved, he has a great personality for relationships, he made a lot of good connections with Roswell,” Roberson says. “He has a lot of people who are supportive of and praying for what he is doing in Suwanee.” 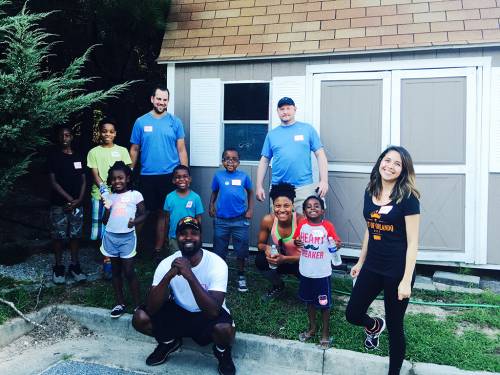 What Morton is doing in Suwanee is ambitious. He is reaching out to the “religious nones,” primarily by convening a Sunday morning hiking group as well as by partnering missionally with the Gwinnett Children’s Shelter. He also convenes a weekly dinner and discussion group at Everett’s Music Barn, in the old section of town, every Monday at 7:00 p.m., for which the core group of the Mustard Seed Project selects the weekly topics, which are accompanied by an interactive exercise prepared by Morton. Each meeting opens with a call for prayer requests.

“My role at those meetings is first of all to facilitate the discussion,” says Morton. “What I always do is try to bring in and bear witness to where either the example or life of Christ or the Christian tradition comes into that topic.”

People in the community learn about the hiking group and the Monday evening meetings primarily through meetup.com, an online network of local groups, or by personal invitation from Morton, who volunteers at several community organizations, or a member of the project’s core group.

Morton says that the hiking group averages between 20-30 people a week, with one hike having drawn as many as 45 participants. Hikers range in age from 1 to 77. The Monday evening dinner and discussion group has an average attendance of between 12-20.

“What the hiking group has done for us is that it gives me and some of our core group of people who want to invite people to reengage with their faith a very natural and non-threatening way by which to forge a relationship and to do it on a regular basis,” says Morton. “Where else when you’re in the suburbs do you have the chance to connect—to spend three hours with someone who before that was a stranger—and have a meaningful conversation that’s not awkward and weird? The trail is one of the only places where you can do that.”

At the beginning of every hike, the group circles up, exchanges names, and responds to “a funny icebreaker question.” Then Morton says that the group is sponsored by the Mustard Seed Project and distributes cards with the new worshiping community’s contact information and a QR code.

As a result of that outreach, Morton says that roughly 65 percent of the people who attend the Monday evening discussion come from the hiking group; the others are mainly people that he or members of the core group have met at different venues in the community. Since the Mustard Seed Project began nine months ago, they have also celebrated their first “real” worship services, Christmas Eve then Easter, which Roberson calls a milestone.

Roberson adds that the Roswell Church was intentional in doing church planting in a new and different way. 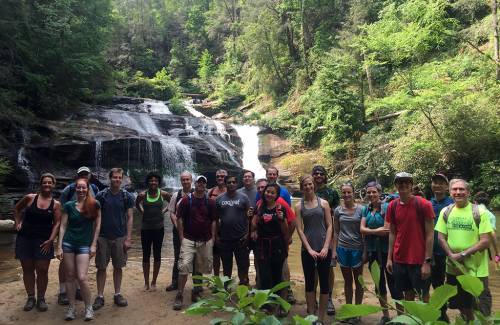 Hiking group in Georgia for the Mustard Seed Project. (Photo by Meaghan Cochrane)

“It was our intention not to send anyone from Roswell to become the nucleus of this church,” he says. “We felt that sending a ‘pillar of the church’ would be something that would be off-putting to new people, and so we have guarded against having Roswell people go out and ‘do things’ for them. We are supporting them from a distance, assisting as Zac tells us. At Roswell, we try to keep the excitement going through a lot of different communication methods and telling success stories of the Mustard Seed Project within the church.”

Amidst all of the joys and challenges of starting a new worshiping community, Morton deeply appreciates the support of the Roswell community and is also grateful to be a part of the 1001 New Worshiping Communities initiative; especially for the personal coaching that he has received through the program. With the assistance of Sara Hayden, they have also just developed a regional cohort group with other people who are doing church planting and seeking to build sustainable communities.

“We’ve also been able to help personally with 1001 apprenticeship training, sharing our story, and helping trying to entertain questions and be a resource for people who are thinking about doing church planting,” Morton says. “We don’t just want to benefit from being a part of 1001, but we want to contribute. We see this as part of a bigger conversation—a bigger movement—that’s happening, not just in the PC(USA) but all over the place. We want to be a part of that and to help other people who are coming up behind us, not just in Suwanee. That ‘s a really big part of our calling. That’s what 1001 has enabled us to do.”

Helping others is also the goal of a new initiative that Roberson is trying with Columbia Theological Seminary, where he serves on the advisory council for seminary president, the Rev. Dr. Leanne Van Dyk. “We have opened up an avenue to offer to be a ‘lab’ and to bring in an intern from the ground up to work with us for learning and for sharing with the seminary,” says Roberson. “One of the goals that Leanne has for the seminary is to train church planters. We’re excited about that as well.”

In the meantime, Morton and his wife Meaghan Cochrane—a Ph.D. candidate who does photography for the Mustard Seed Project and also assists in other ways—continue to be gratified to see people connect with God in new ways, ways that they didn’t necessarily think were possible.

“We had one guy in particular who hasn’t prayed out loud in ten years, and he’s been leading prayer at the end at our group time,” Morton says. “You’re tempted to say that it’s little things like that that are exciting, but they’re not little at all, they’re actually huge. Examples like that of people that you might take for granted in the [traditional] church world, seeing people like that guy really get involved is really the coolest thing. That’s what we’re here to do. That’s it.”