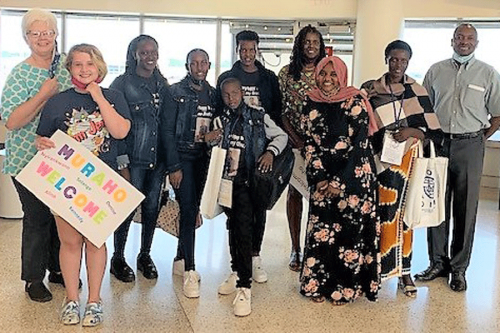 One stage in the welcome of Nyirankwano and her family at Louisville Muhammad Ali International Airport. (Photo courtesy of Kentucky Refugee Ministries)

LOUISVILLE — The plane arrived at Louisville Muhammad Ali International Airport ahead of schedule on September 29. As a result, the greeting came in stages.

Nyirankwano Toyota and her family of three daughters and a grandson came from the Democratic Republic of Congo. Refugees, they came to make a new life.

Plans for this moment had begun in early September. Household goods had been donated. Funds raised. Food collected. Generosity abounded. These efforts accelerated when KRM provided the news toward the end of the month that the family was on its way. 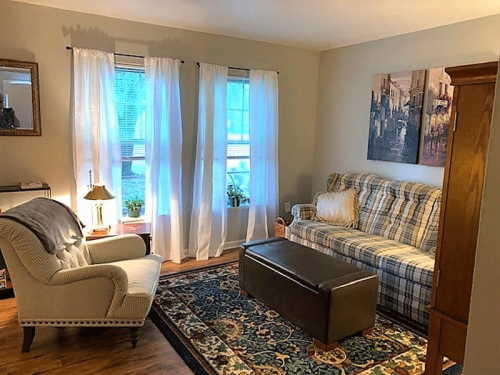 Volunteers prepared the living room along with the rest of the apartment for the arrival of Nyirankwano and her family. (Photo by Ruth Gardner)

Volunteers cleaned the new apartment. Goods were delivered by cars and vans and with the help of movers. The rooms were readied. The pantry stocked with the donated food.

The KRM representatives, which included an interpreter, along with representatives of the PC(USA) and Central Presbyterian Church, accompanied the family to their new home. Upon their arrival, a buoyant, joyful reunion occurred.

There to greet the family were individuals who had lived in the same refugee camp in Rwanda where the family had been living. Patrick, Nyirankwano’s son who had been resettled in Texas about a year ago, was present as well. When he learned that his family was coming, Patrick moved to Louisville to be with them. In anticipation of seeing Patrick again, family members wore T-shirts saying, “I am happy to see again my brother.”

When the welcome meal arrived, a group of joyous people had congregated inside and outside the apartment. Flowers were given to Nyirankwano, jokes and phone numbers shared. Together, different parts of Christ’s body helped welcome the family. 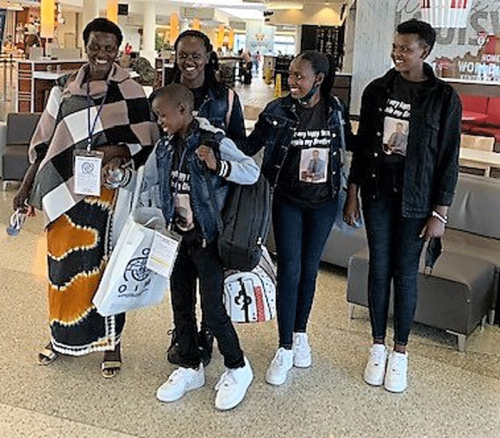 Presbyterian Disaster Assistance (PDA) coordinates the PC(USA)’s humanitarian response to and advocacy on behalf of refugees, asylum seekers and other forced migrants. PDA offers a wealth of resources to support the ministries of congregations and mid-councils. The Office of Immigration Issues, the Office of Public Witness, and the Presbyterian Ministry at the United Nations partner with PDA in the ministry of advocacy.

PDA helps connect Presbyterians wishing to learn about refugee resettlement with agencies in their areas who provide resettlement services. In Louisville, one of those agencies is Kentucky Refugee Ministries. 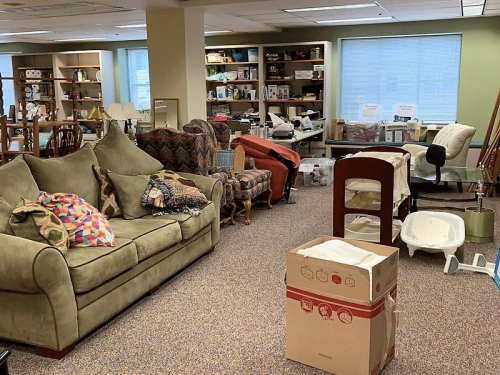 A small portion of the household goods and food donated for Nyirankwano and her family. Items they cannot use will be given to Kentucky Refugee Ministries to use with another family. (Photo by Mark Koenig)

KRM has welcomed refugees to Louisville since its founding in 1990. KRM works with many partners both to fund its ministry and to serve as co-sponsors for families and individuals. Presbyterian congregations and individuals support the work of KRM in both ways: financially and as co-sponsors.

In 2017, agencies and entities of the PC(USA) partnered with KRM as co-sponsors of a family from Syria. Responding to the ongoing need to welcome refugees, the decision was made to serve as a co-sponsor again this year. Central Presbyterian Church’s offer to partner in the co-sponsorship was gratefully accepted.

After the joyous greeting upon their arrival, support will continue for Nyirankwano and her family. A blessing of their home will take place. Funds will be raised, clothing collected, and orientation to life in Louisville provided.

As Presbyterians through the years and across the country have learned, refugee resettlement, as do all ministries of welcome, involves moments. As do all ministries of welcome, refugee resettlement involves establishing and nurturing ongoing relationships. Such ministry occurred in the airport and at the apartment. Such ministry will continue as Nyirankwano and her family make their new beginning.