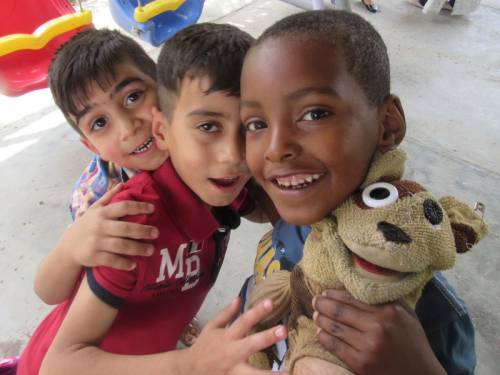 It’s time for a break at Iraq’s Basra Church Preschool. Pictured are a some of the children benefiting from desalination equipment that’s been installed at the church. (Photo by Elmarie Parker)

Presbyterian Church (U.S.A.) partners from the Assembly of Evangelical (Presbyterian) Churches in Iraq are sharing, in their own words, about the Matthew 25 ministries to which they have been called.

Ministries bringing hope to incarcerated women and children in Kirkuk, housing to Muslim and Christian families displaced from their homes in the Nineveh Plain and Mosul, and clean, drinkable water to people in southern Iraq — all are ministries supported by U.S. Presbyterians.

Ministry to incarcerated women and children in Kirkuk

“I write to you today to provide an update on a recent visit to the Kirkuk women’s jail,” explained Mayada Jazrawi, who oversees the prison visitation ministry of the Presbyterian Church in Kirkuk. 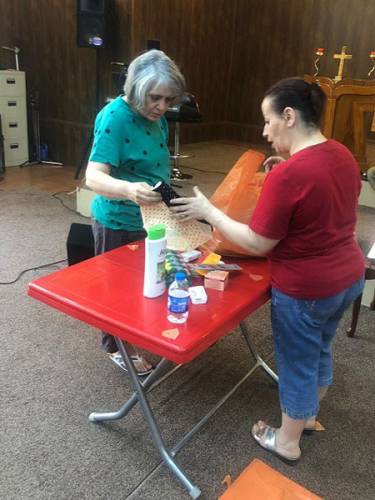 Mayada Jazrawi and Susan prepare for their next visit with women in jail. (Photo by Elmarie Parker)

“There were 52 women and 15 children. As has been the case in our recent visits, the majority of the women in jail were widows of suspected ISIS terrorists. Many of them were familiar with us, including the newer ones who hadn’t met us before — the rest of the women had told them about us.

“Initially, we couldn’t speak with them very much because of the large number of women and children. Additionally, the new cells had large columns that made seeing all of them at once difficult. So, we divided among them and started to speak with them and write down their prayer requests: 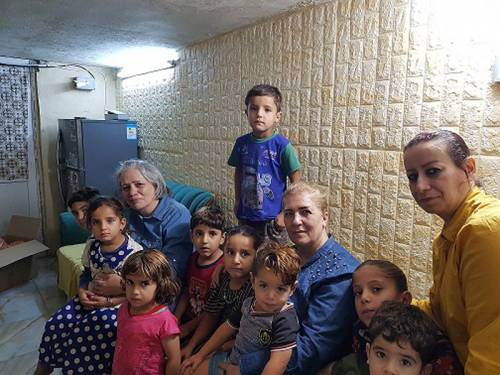 Mayada and Susan with some of the children who are imprisoned with their mothers because no other family is available to care for them. (Photo by Elmarie Parker)

Jazrawi requests prayers that these women might know the Lord Jesus Christ as the God of peace and mercy.

Ministry of housing for displaced families

The National Evangelical (Presbyterian) Churches in Kirkuk, Iraq, are ministering to Muslim and Christian families displaced from their homes in the Nineveh Plain and Mosul since 2014.

“It’s entirely too easy and incredibly tempting for many of us in Iraq to fall prey to despair, having been in a near-constant state of war since 1980,” said the Rev. Haitham Jazrawi, pastor of the National Evangelical (Presbyterian) Church in Iraq. “An entire generation of men and women under 40 have seen nothing but war.”

“For the past few years, especially under ISIS,” he said, “far too many have been displaced from their homes, watched their children die and witnessed their livelihood crushed.” 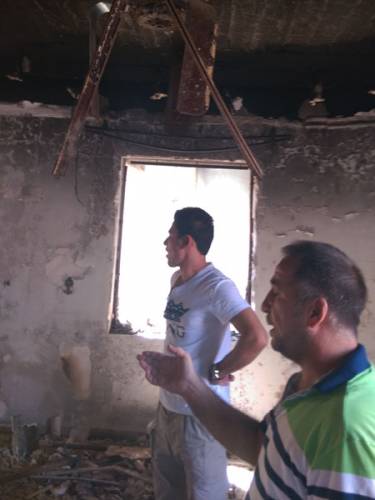 The was the state of the home of one Christian family when the family returned to the Ninevah Plain earlier this year. (Photo by Elmarie Parker)

“It’s borderline arrogant to expect them [Iraqi families] to find hope in the face of their adversities,” Jazrawi said. “As I consider the pains of my fellow Iraqis, I’m reminded of the Lord’s word in Ezekiel 37, in what might be one of the strangest stories told in the Bible. The prophet Ezekiel has a vision in which he sees a valley full of dry bones. The Lord commands him to prophesy that the bones gather together, grow flesh, blood and skin, and then to breathe and be brought to life. It’s one of the most beautiful displays of the Lord’s infinite sovereignty: He doesn’t simply raise people from the dead; no, he commanded bones, dry bones, to coalesce and grow life.

“Like Ezekiel, who answered the Lord’s call to do the unlikely and seemingly absurd task of speaking to bones, so have you, our friends at PC(USA), answered the Lord’s call to speak life into your Iraqi brothers and sisters halfway across the world. I cannot overstate just how much your love, prayer, and support have continued to breathe life into the valley of death that previous wars and ISIS left behind. It is a testament to our Lord’s infinite grace that he has not forgotten his people; on the contrary, every single day he breathes life through his church in Iraq. This is most especially seen through his blessing of our outreach to prisoners and refugees, Christian and otherwise. 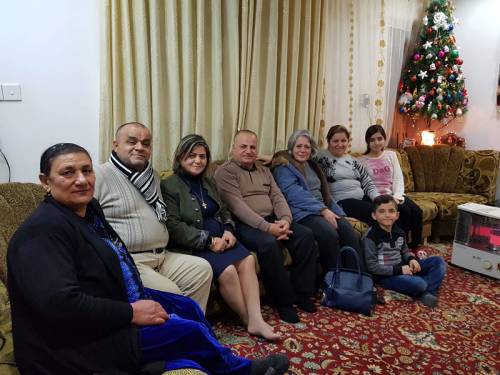 This is how the same home looked after completion of the rehabilitation work funded through the Presbyterian Church in Kirkuk. (Photo by Elmarie Parker)

“We have continued to see more Christian internally displaced families returning to their homes that were previously occupied by ISIS. Though we of course miss having our brothers and sisters nearby worshiping with us, we are beyond delighted that they are able to return to their homes and rebuild their lives. Your gift was used as a part of the internally displaced resettlement programs that our church has continued to support. These projects include financing home repairs (most homes were burned by ISIS, and several were razed to the ground), purchasing new appliances, and ensuring that water and electricity are once again connected to the re-inhabited homes.”

Ministry of clean water in Basra
The National Evangelical (Presbyterian) Church in Basra, Iraq, serves the most economically vulnerable in the city by providing ministries of drinkable water and reliable, safe housing. This work addresses frequent droughts and structures of injustice that oppress, especially the most vulnerable.

The south of Iraq has been facing increasingly severe water shortages and contamination of public water supplies over the past many years. This is due to a combination of impacts from more frequent droughts, water policies in Turkey and Syria that restrict water flow through their respective dams on the Euphrates and Tigris Rivers, lowering water levels in Iraq, which is on the downstream side of both rivers (with the ripple effect of causing salinated water from the Gulf to back up into the fresh water of the river), water misuse by Iraqi industry and farmers, and the heavy metal contaminants left behind from uranium-depleted weaponry used by coalition forces during both Gulf Wars. 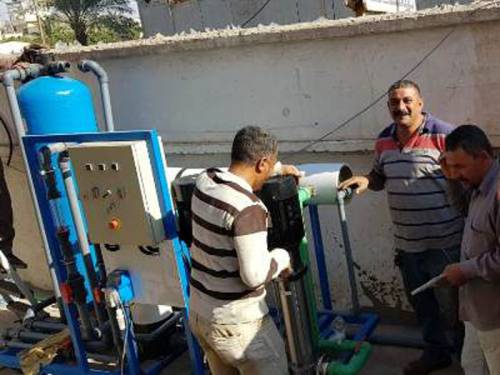 During the summer of 2018, this water contamination and shortage reached a peak, leading to several thousand citizens in Basra becoming dangerously ill, even to the point of death for several hundred. The water was so contaminated that to shower in it caused severe chemical skin burns.

The Presbyterian Church in Basra responded, supported by their Presbyterian friends in Kirkuk and Baghdad, who were sending shipments of bottled water for them to distribute to those in need, especially the most impoverished families in Basra, who could ill afford to buy bottled water. Bottled water is expensive, especially as those families who have a corner on the bottled-water industry in Iraq chose to increase their profit margins rather than address the root causes of water contamination and shortage.

So, the Presbyterian Church in Basra began to research desalination equipment so that they could process larger quantities of water for those in need. The project cost nearly $16,000. Through Presbyterian World Mission, the Iraq Partnership Network and Presbyterian Disaster Assistance, the funds were sent to meet this need.

“With the funds received from Presbyterian World Mission and Presbyterian Disaster Assistance, we were able to purchase the desalination unit at a 10% discount, two water tanks (holding 3 and 5 metric tons of water respectively), two electrical pumps, all the necessary electrical supplies, and the materials needed to install a concrete pad and sun-shield shed,” said Dr. Zuhair Fathallah, elder at the church. “The desalination equipment requires monthly filter changes and continuing maintenance, which costs a little more than $1,000 a year. This will be a continuing funding need.

“After the installation of this equipment, we have now been able to provide the children of the kindergarten and the nursery schools (over 250 children, 98% of whom are from non-Christian families) with clean potable water while they are at school with us, and to the schools’ staff and the children’s families. Members of the congregation can use this water supply, along with anybody from the community who is in need, for no cost to the beneficiaries. There is a water tap near the church gate anyone may use who needs water. We also installed a line to the apartment of the pastor and his family and to the principal of our schools and his family’s apartment. 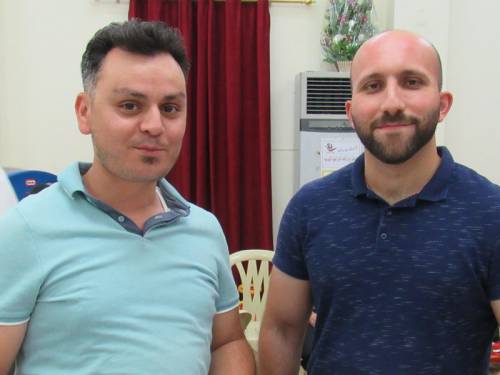 Marduk (left) and Bassem oversee the nonprofit arm of the Presbyterian Church in Basra. The nonprofit allows the church to serve the most economically vulnerable people in the city by providing them drinkable water and safe housing. (Photo by Elmarie Parker)

“The unit is working now only three hours a day (producing 3 metric tons of water), because of the 2019 summer holidays for the kindergarten, but the water is available for everyone who is in need of it. There is little demand now because the weather is still good and because this year we had a heavy rain, which has added to public water reserve of sweet water.”

Concerned PC(USA) members will be bringing forward an overture to the 224th General Assembly in 2020 with recommendations for how Presbyterians can advocate for better clean-up of heavy-metal contaminants, such as those used in both Gulf Wars. Write to elmarie.parker@pcusa.org if you would like to receive a copy of the proposed overture to learn more about this issue, which is a leading cause of community health challenges, including severe birth defects.

Jazrawi expressed gratitude for the support of U.S. Presbyterians.

“We continue to pray for you and for our Lord to strengthen your missions across the globe,” he said. “We thank you for your trust in us, and for your unceasing love and support; we pray that our Lord continues to bless you in ways you cannot imagine. We ask that you continue to pray for us and walk alongside us as we all work to fulfill the same mission: to spread hope through the Gospel to the least of these.”

The Revs. Elmarie and Scott Parker have served in the Middle East since 2013. Elmarie works as regional liaison for Syria, Lebanon and Iraq. Scott serves as associate for ecumenical partnerships and as a writer in residence with the Middle East Council of Churches.