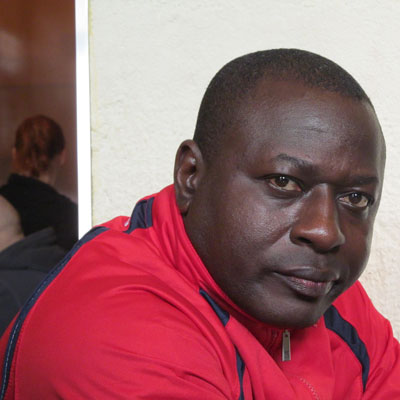 LOUISVILLE — Jaff Bamenjo hails from Cameroon, a country embroiled in internal warfare the last half of this decade.

But when asked to name an example of the impact his work has had, Bamenjo reflects more than a decade back to a food initiative that is still serving citizens of his country today.

In 2005, the Network for the Fight Against Hunger (RELUFA) recognized that the poor and densely populated northern region of the country was suffering recurring hunger problems.

“RELUFA worked with communities starting in 2005 to understand what kind of intervention will respond to communities’ needs, avoid creating dependence and will be sustainable,” wrote Bamenjo, coordinator of the organization. “Communities involved in the initial program proposed a system that will make food available in the community at all times, and that will not distribute but provide foods to grain bank members to reimburse during their next harvest.”

Creating these banks helped people in these communities avoid paying high prices or interest for food during lean times and ensured food was available year-round.

“A total of 45 community grain banks were created and are operating in selected villages,” Bamenjo wrote. “Around 21,870 people (men, women, and children) have benefitted from this operation. This has reduced the scale of men abandoning their families to move to towns in search of money to buy food or selling their animals to buy food. Animals are now sold to pay for school fees for the children or pay medical bills.”

Bamenjo will be talking about his work in the United States next month and in October as one of the Presbyterian Peacemaking Program’s International Peacemakers. Coming from around the world, the Peacemakers will be hosted by mid-councils (synods and presbyteries) and congregations to talk about their work and challenges and learn from Americans and each other.

Click here to see where all the 2019 Peacemakers are scheduled to visit.

Bamenjo, who has written for outlets such as the Presbyterian Hunger Program’s Together for Justice blog, sees his visit as a chance to tell people in the United States how important the support of the PC(USA) and the U.S. government is in supporting justice work in Cameroon.

“This is also an opportunity for me to express my thanks and appreciation and to make it clear that people in the USA can influence the resolution of the conflict in Cameroon which is least reported in the media,” Bamenjo wrote, responding to questions from the Peacemaking Program. “I solicit Christians in the USA to talk to their senators, congressmen and women about the brutality and killings in the Northwest and Southwest regions of Cameroon. Only international pressure can force the government to adopt a political rather than a military solution to the conflict that is bringing untold sufferings to civilians.”

RELUFA has been working to address that conflict, under extremely trying circumstances.

“Currently, there are more than 50,000 Anglophone refugees living in terrible conditions in neighboring towns in Nigeria, while over 430,000 internally displaced people from the northwest and southwest regions are either living in the forests while those who are lucky have made it to neighboring towns in the French-speaking regions,” Bamenjo wrote. “As of today, more than 200 villages have been burnt by the military and the burning continues.

“RELUFA has developed a scheme to seek funds and help the people affected by the conflict in the northwest and southwest regions of Cameroon.”

And the northern region where RELUFA set up grain banks more than a decade ago have been hard hit by “attacks of Islamic sect Boko Haram that wants to institute an Islamic caliphate in the north of Nigeria, Cameroon, Chad and Niger,” Bamenjo wrote.

The conflict between French- and English-speaking regions of Cameroon exemplifies the value of the work Bamenjo and his colleagues have been doing for decades.

“I will be telling congregations in the USA that their generous support is helping many lives in Cameroon,” Bamenjo wrote. “Addressing the root causes of hunger is always better than focusing on the symptoms. Solving problems at an early stage is always better than running behind to resolve conflicts.

“The USA is an important country, and exerting pressure on power structures can influence the search for peaceful resolution of conflicts.”

Surrounded by hopelessness, her message is one of hope

Cuban Peacemaker inspires with ‘liberation word’ of the Bible and MLK

She works to bring healing to those around her