Make A Donation Click Here >
Home › How should we protest, and why? 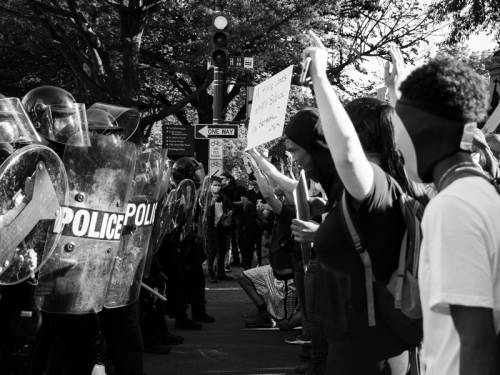 Kennedy, Souza, and Charlotte, North Carolina-based activist Markis Millberry were guests Monday afternoon on a special episode of “Just Talk Live: A Faith and Justice Talk Show” to discuss the weekend of protests that had erupted across the country late last week in the wake of the death of George Floyd at the hands of police officers in Minneapolis, as well as Breonna Taylor, who was shot and killed by police at her apartment in Louisville, Kentucky; and Ahmaud Arbery, who was allegedly killed by a former police detective and his son while jogging in Glynn County, Georgia. None of the victims were armed.

These killings and a long history of people who are black being killed at the hands of police brought one of the biggest weekends of nationwide mass protests in recent memory, with many engaging for the first time. That was part of the impetus for the special edition of the show, which was launched in March by Unbound, an online Christian social justice journal from the Presbyterian Church (U.S.A.)’s Advisory Committee on Social Witness Policy. The series was originally called “Young Adult Gatherings.”

“Anybody who wants to engage or is encouraged to engage in civil unrest should know what they’re going down there for,” Souza said, “because it’s not always a pretty situation.”

Protest, all three pointed out, has a long history in the United States and has been important for creating change. Co-host Lee Catoe noted Monday was the first day of Pride Month, and that many of the advances in LGBTQIA+ rights were achieved through protest.

And change is long overdue in law enforcement, the speakers said, as evidenced by these recent incidents, which they called “murders.”

“The police brutality across this whole country needs to stop,” said Millberry, who calls for broad police reforms. “I’m tired of hearing how unarmed Americans are getting killed, every single day. The department of justice needs to step up, the White House needs to step up, and the police need to step up.

“I am peacefully protesting every single day in the Uptown Charlotte area, making sure we continue to demonstrate peacefully, and let our message be heard.”

Souza said that an important part of an effective protest is knowing who is in charge.

“Not to create a hierarchy, but it’s to have some direction of where we’re going and what we’re doing, so that the disbursement doesn’t look unorganized.”

Souza said people interested in getting involved in protest can try to connect with organizations such as the local Black Lives Matter chapter to get direction, including essentials to prepare such as water, facemasks and goggles, and solution for the eyes in case tear gas is used. For white participants in the current actions, she said it is really important to follow directions from protest leaders, who may at some points ask white participants to stand back and at other times may ask them to help protect siblings of color. There have been several pictures this past weekend out of places such as Louisville of lines of white protesters forming barriers between police and black protesters. 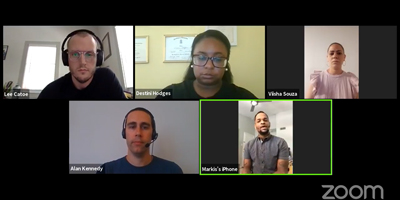 Protests are not for everyone, all involved in the conversation said. Co-host Destini Hodges of PC(USA) Young Adult Volunteers acknowledged she did not participate in protests this weekend because she did not want to risk being exposed to the COVID-19 virus when she was preparing to go home to vote.

“Activism is something we all have to engage in, but that doesn’t mean you have to put your bodies on the line,” Souza said. “Don’t feel ashamed for not being down there with us. Supporting us however you can is what matters.”

Some of the methods of support she mentioned included contributing to bail funds for people who are arrested during protests, buying and delivering supplies to protesters, and simply being there for protesters.

Participants said they were encouraged by the diversity they have seen in the crowds protesting and the youth.

“I’m tired of people that are 60 and 70 running this country,” Millberry said. “They still have a platform of the ’60s, during segregation. Our young people that are woke need to come together.”

The trio of guests saw things these past few days that have disturbed them, including police violence against peaceful protesters and journalists, and support for that violence from the highest authorities in the country.

“President Trump just tweeted out encouragement to the police and the military to shoot – to shoot – unarmed peaceful protesters,” Kennedy said. “That’s horrifying. Cornel West just said there’s a boot on the neck of American democracy, because democracy can’t flourish if the people are oppressed, if the people are prevented from protesting, if they are prevented from exercising their constitutional rights, our First Amendment rights. And I think we’ve seen countless violations of those rights in the last few days, and that’s not even including the murder of George Floyd and Breonna Taylor, and many more before.”

Christians, Souza said, are called to stand up to oppression.

“And, as militant as it may sound,” she added, invoking late civil rights leader Malcolm X, “we must wrap our arms around them, by any means necessary.”

The Advisory Committee on Social Witness Policy is one of the Compassion, Peace & Justice Ministries of the Presbyterian Mission Agency.