Thanks to generous gifts to the church, PDA is giving to long-time partners to aid their response 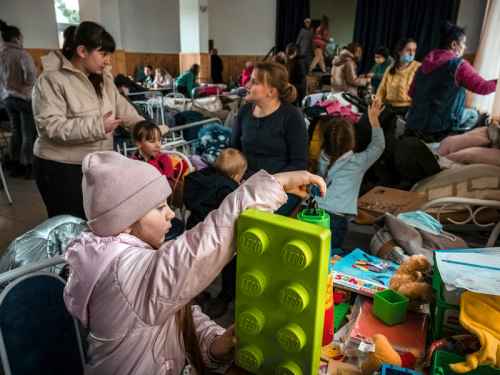 A child plays at an aid station at the Ukrainian-Hungarian border, where ACT Alliance member HIA is assisting Ukrainian refugees. (Photo by Antti Yrjönen/FCA)

“We are part of a church,” Krehbiel said. “And so, we have church relationships, and that gives us a different way of entering into this work that is special. It means we’re grounded in those relationships and people that have relationships in the community.”

In situations such as Ukraine, Krehbiel says PDA’s role is finding organizations on the ground, in the communities that need help, and helping to build their capacity to assist through the generosity of donors to PDA, including through the One Great Hour of Sharing special offering. She cites the Hungarian Reformed Church as an example.

“So, it’s helpful for us to not only have the direct relationship with them, but also to know that they’re in relationship with others, so we can see the whole picture, and we’re able to work with the other national and international partners to see that resources get to them.” 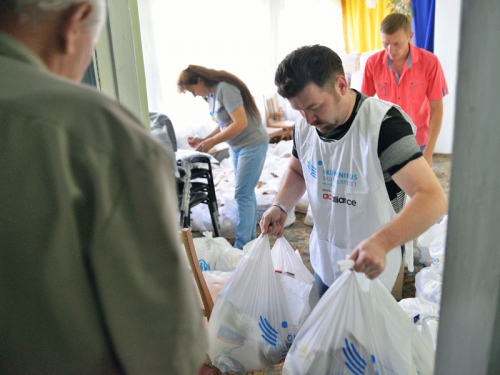 PDA is also providing support to Hungarian Interchurch Aid and Lutheran World Federation through its longtime international partner ACT Alliance, and the International Orthodox Christian Charities in Romania. Krehbiel said that all partners are saying they see Ukraine as a long-term response that will require continued support.

The Rev. Dr. Laurie Kraus, director of PDA, said the outpouring of response from Presbyterians has been unprecedented, and that she is hearing the same from other denominations.

“It’s a massive, massive refugee response that’s still unfolding, and that could escalate into a much different sort of issue,” Kraus said, noting it is the largest refugee crisis in Europe since World War II.

As of Monday, 3.6 million people have left Ukraine and 6.48 million have been displaced within the country.

PDA has extensive experience responding to refugees in the United States and abroad, as wars in countries like Syria, Cameroon, and the Democratic Republic of Congo have driven millions of people from their homes. Kraus acknowledges that being a European country makes the Ukrainian tragedy feel closer to many people in the United States and moves them to respond.

“I’m grateful that your heart has been broken by what’s happening in Ukraine, and I’m hopeful that the breaking of your heart over Ukraine will break your capacity open even more to make connections when these things happen in places that don’t feel as close as Ukraine,” Kraus said.

Krehbiel said, “We don’t want to compare one suffering to another, one disaster or conflict against another and say these people are more deserving than these people. What we want to talk about is when these things happen, and people are suffering from conflict, and when they are suffering from disasters, what is our call to respond? And how can we be as faithful to those people who are not in the limelight, who are not in the headlines, but who are in just as dire need of our care and having their rights protected?”

A quickly growing issue in the countries taking in Ukrainian refugees is the need for housing, as it becomes obvious many will not be able to go home anytime soon, if at all. PDA’s specialty is long-term response, and its partner ministries in the Presbyterian Mission Agency and the Office of the General Assembly will be part of a broad, sustained response, as well as advocacy offices in Washington and at the United Nations and Presbyterian World Mission.

“PDA’s work is humanitarian response to refugees and disaster, but the cycle of repair and healing in a crisis of this magnitude requires intersectionality,” Kraus said. “But humanitarian response alone is not a holistic response. We need the Office of Public Witness and the Presbyterian Ministry at the UN to help the Church lift its voice in advocacy. We need Presbyterian Peacemaking and the Militarism Roundtable to address impacts of the cultures of war and violence that fuel such crises. World Mission colleagues have been sustaining collegial relationships with partners throughout this region for many, many years, and building bridges for precisely such a moment as this.”

“We work together with OGA and in our relationships with the World Council of Churches, the World Communion of Reformed Churches and ACT Alliance to have a unified witness and response.”