Christmas Joy Offering – Supporting our leaders: past, present and future.
Make A Donation Click Here >
Home › Heads up! The call to ministry can occur just about anytime 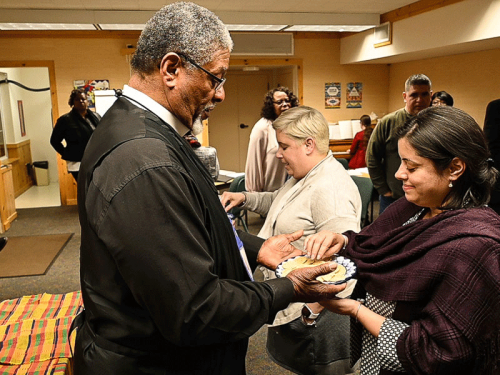 Half of ministers answering questions posed in the Minister Survey said they heard God’s call to ministry before the age of 20. (File photo by Gregg Brekke)

LOUISVILLE — According to the Call to Ministry Report, the latest report to come from the Minister Survey conducted by PC(USA) Research Services, which is available in English, (with Spanish and Korean versions to be posted soon), half of all ministers heard the call to ministry before the age of 20.

However, the call to ministry can come at just about any age: In the survey ministers report first hearing the call anywhere from younger than 12 up to 63 years old.

On average, five years pass between hearing the call to ministry and either entering the discernment process or deciding to attend seminary. 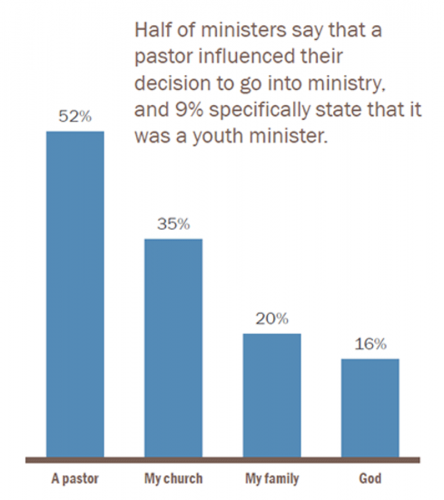 In the survey, ministers were asked, “Who or what was most influential for you in sensing this call?” 3,442 responded with their story. For many individuals, more than one factor played a role. The most common response was the influence of a pastor. Half of the responding ministers say that a pastor influenced their decision to go into ministry, and 9% specifically state that it was a youth minister.

Other commonly cited influences include a person’s home church, their family and God. As one might expect, the response of “pastor” and “family” overlap quite a bit. Many ministers state they were influenced into ministry at least in part because a member of their family (or many members) are pastors. Dads who are pastors are mentioned frequently; however, many women also mention the influential role of female pastors in showing them that such a possibility exists also for themselves.

In fact, some women even joined the Presbyterian Church (U.S.A.) and its predecessors after learning that women could be pastors. As one woman explained, she decided to go into ministry after “finding out that women were being ordained as pastors! It was while I was working with a youth group, the pastor told me — I wasn’t Presbyterian at the time.” Another described her discovery that women could be ministers within PC(USA) as “lights and fireworks going off in my mind!”

One particularly interesting finding from this survey is the role of trauma as a turning point in opening a person to hear a call to ministry. Although it was a small number statistically (1%), 30 respondents spoke about the role of past trauma and the death of loved ones as formative in influencing them toward ministry. One minister, in describing his experience after a close friend died in a car accident, explains, “Philosophy and Psychology provided no answers or significant help and still to this day, age 79, I don’t have the ‘answers’ to meaningless deaths, injustice, suffering or why these things happen; but the Lord, Scripture, life lessons, superb mentors all have helped and my three years at seminary were powerful and tremendous years of growth, searching and feeling a very deep sense of call to a pastoral ministry and caring for people.”

Ministers are generally satisfied with their call; 69% of ministers who responded are not seeking a new call. In addition, half of those who are not currently in a call are also not looking for one. “Of course, this survey fielded in 2019, before the pandemic,” explains Dr. Angie Andriot, Research Services. “More recent survey evidence indicates that minister satisfaction with their call has decreased in recent months. In fact, according to a recent Barna survey, 29% of pastors have ‘seriously considered quitting full-time ministry in the last year.’” (ChurchPulse Weekly Conversations: Rick Warren on Leading Amidst Grief, March 2021)

According to Dr. Susan Barnett, director of Research Services, another question is how many will respond to the call to ministry as a result of the pandemic?

When considering a new call, ministers most heavily rely on the sense that God is, in fact, calling them. Beyond that, however, they do have practical considerations. Most common are proximity to extended family, that the ministry in which they are serving is already healthy, and that there are job opportunities for their partners or spouses.

The report also contains information on the type of ministries in which pastors and chaplains serve, as well as questions regarding when ministers expect to retire and why ministers of retirement age continue working. “God has called me to this work,” said 75% of the ministers working past retirement age. A sense of God’s call strikes a consistent theme among the ministers who responded to the survey.

Want to learn more? The findings in this article come from the Call to Ministry Report, available in English, Spanish, and Korean. This report is based on data from the PC(USA) Minister Survey, a massive 110-question survey which fielded from September to November of 2019. Invitations were sent by postcard to all ministers for whom the Office of the General Assembly had an address. The survey was also one of the Board of Pensions’ Call to Health challenges. This partnership contributed to nearly half of all responses. Twenty-three percent of the denomination’s 19,243 ministers (n=4,495) responded to the survey.

This is the seventh in a series of eight articles on the survey results. Those articles, being published on a weekly basis, are: