The church is responding to the Syria-Turkey earthquake, GIVE NOW!
Make A Donation Click Here >
Home › Women ministers, clergy of color report higher incidences of discrimination than their counterparts 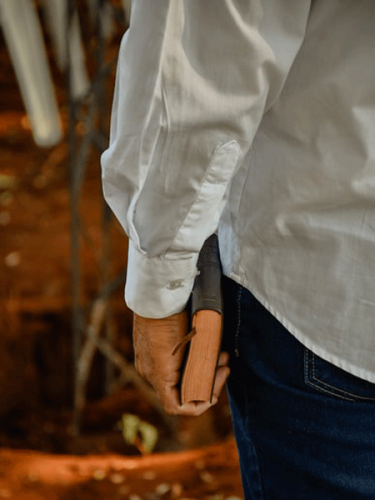 LOUISVILLE — In the Minister Survey conducted by the Presbyterian Church (U.S.A.) Research Services, Ministers of the Word and Sacrament were asked about their experiences with discrimination, opportunities and leadership struggles. Their answers form the basis for the Discrimination, Opportunity, and Struggles of Leadership Report, available in English, Spanish, and Korean.

Three groups of questions explored ministers’ experiences with discrimination, opportunity and leadership struggles. First, respondents were asked if they had ever faced discrimination or harassment in the PC(USA). Respondents were next asked if they felt that social identities such as age, disability, gender, race or sexual orientation had impacted their acceptance as a leader, consideration for promotion or dismissal. Finally, respondents were asked to rate how much they struggled with being included by other leaders, experiencing inappropriate or offensive comments, or receiving low pay, among other aspects of leadership in the PC(USA).

Thirty-seven percent of all ministers indicated that they had experienced some kind of discrimination or harassment. Looking at the responses in demographic categories, patterns of discrimination emerge based on the age, gender and race of the respondent.

While one might expect older respondents to report age-based discrimination, among the respondents to the survey that expectation is reversed. Younger respondents often feel that they have difficulty being accepted as leaders and authorities within the church.  Younger women especially find their age to be a barrier to leadership. 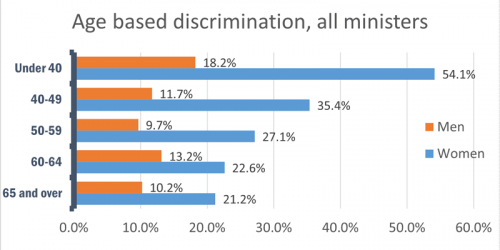 Overall, the patterns established earlier hold for responses to these questions as well. Women, people of color, and younger ministers report facing more barriers. Several examples of the results help illustrate these trends.  Seventy-one percent of women under the age of 40 reported difficulty being accepted as leaders as did 51% of Black respondents. Forty-two percent of women felt overlooked for promotion because of their gender.

The ministers were asked to rank how much they struggle with various aspects of leadership on a scale that ranged from “Not at all” (1) to “A great deal” (7). About one-half to two-thirds of ministers responded that they faced some degree of struggle on leadership issues such as being included by other leaders, being recognized for their leadership abilities, having their work validated, receiving inappropriate comments, loneliness and low pay. Across all demographics, ministers most commonly marked struggles with low pay and loneliness as 5 or above; 31% struggled with low pay and 29% struggled with loneliness to a high degree as a leader.

In every category of leadership struggle, women responded two to three times more often than men that they had a high degree of struggle with that aspect of leadership.

Want to learn more? The findings in this article come from the Discrimination, Opportunity, and Struggles of Leadership Report, available in English, Spanish, and Korean. This report is based on data from the PC(USA) Minister Survey, a massive 110-question survey which fielded from September to November of 2019. Invitations were sent by postcard to all ministers for whom the Office of the General Assembly had an address. The survey was also one of the Board of Pensions’ Call to Health challenges. This partnership contributed to nearly half of all responses. Twenty-three percent of the denomination’s 19,243 ministers (n=4,495) responded to the survey.

This is the sixth in a series of eight articles on the survey results. Those articles, being published on a weekly basis are: