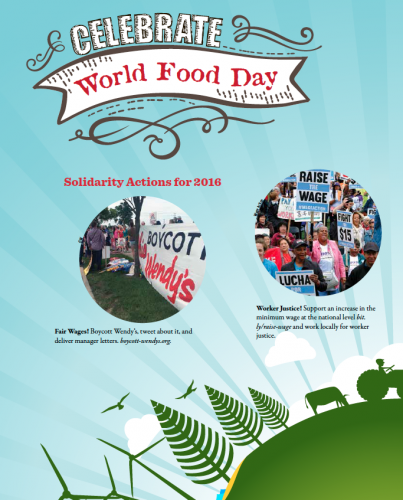 LOUISVILLE – When you go to the local grocery store or purchase a meal at a favorite restaurant how much do you know about how the food is grown, gathered and prepared? What is your church doing to end hunger and poverty in your community or across the globe?

These are some of the questions Presbyterians and the public are asked to consider this October during Global Food Week of Action and World Food Day. October 9-17 gives Christians and others around the world the opportunity to take action for food justice and food sovereignty.

“The Presbyterian church has been incredible in terms of feeding people through numerous hunger alleviation efforts, feeding programs, food pantries and community gardens that bring fresh produce to those who need it,” said Andrew Kang Bartlett, associate for National Hunger and Poverty in the Presbyterian Hunger Program. “Presbyterians are realizing that unless we address the systems that continue to produce hunger and poverty, we won’t end hunger and we want to end hunger.”

World Food Day is celebrated every October 16 commemorating the establishment of the Food and Agriculture Organization of the United Nations in 1945. Forty-two countries came together in Quebec that day and World Food Day has been celebrated ever since. Now more than 150 countries participate. In 2008, churches around the world convened through the Ecumenical Advocacy Alliance to launch a week-long campaign focusing on that special day.

Kang Bartlett says people in the U.S. are struggling to make enough money to feed themselves and their families, and this is at the heart of hunger and malnutrition. Accordingly, the two domestic-focused actions advocate for fair wages and worker justice.

“When it comes to affordable access to good food, we find the same racialized system that created the economic inequality has also created divides within our own cities and in rural areas where there is a lot of healthy food in some areas while very little in others,” he said.

The Presbyterian Hunger Program is asking individuals and churches to consider one of four actions during the campaign;

The Wendy’s boycott has generated a lot of attention this year, which focuses on the treatment of farm workers who pick the vegetables sold in fast food restaurants and groceries. Earlier this year, the Coalition of Immokalee Workers launched a boycott against the fast food chain for purchasing its tomatoes from growers who are not bound by the Fair Food Program.

“We are asking Presbyterians and all citizens to have a sense of gratitude for those involved in food production, distribution, processing, selling and cooking,” said Kang Bartlett. “Pray for those who are exploited within the system.”

Kang Bartlett says Presbyterians are committed to food issues and very proactive in the development of community gardens or food pantries, adding that more than 90 percent of churches are either involved in their own hunger ministry, supporting one with volunteers or give financially.

“One of the most valuable gifts of doing this work is that it gets people in touch with those they may not typically interact with,” he said. “People who are struggling economically, those who may be dealing with substance abuse problems or mental health issues become a part of a church’s family and members get to know them as brothers and sisters. This is a tremendously valuable opportunity for us to put our faith into action.”

Kang Bartlett says he’s heard from churches over the years that have used Food Week of Action and World Food Day to do some incredible outreach in their communities.

“Some churches have held local food potlucks, inviting farmers in while members create dishes out of locally grown foods,” he said. “It’s a great time of year around harvest to celebrate God’s abundance. For example, last year, two Presbyterian congregations participated in the Food Week of Action by harvesting a crop of ‘Three Sisters’ – corn, bean and squash – at La Minga cooperative farm in Prospect, Kentucky.”

More than 80 people from the Preston Highway Presbyterian Ministry, families from Covenant Community Church, an immigrant organization La Casita, members of the Master Gardeners Class and sustainable agriculturalists participated in the Harvest Festival. Locally-harvested food along with music, soccer and a piñata for children filled the afternoon while others ground home-grown corn and made fresh tortillas and tamales on an outdoor fire.

Kang Bartlett says World Food Day provides congregations and pastors with the opportunity to raise important conversations. “If there’s one issue that all Presbyterians can see eye to eye on it’s making sure that people are able to feed themselves and their families. Hunger is a unifying issue.”