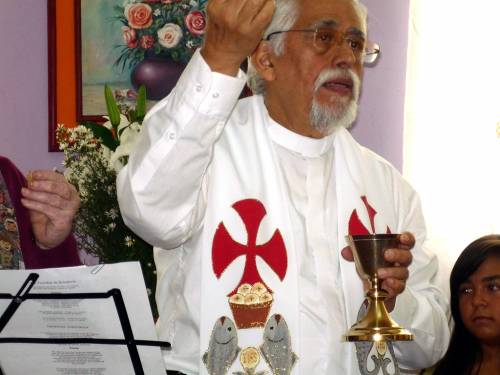 Edgar Moros-Ruano, a former Presbyterian mission co-worker, serves as pastor of the Congregation of the Resurrection and a tenured professor of philosophy at Universidad de Los Andes (ULA) in Merida, Venezuela. (Photo by Juan Sarmiento)

VENEZUELA — At the Presbyterian House in Merida, Venezuela, Dr. Edgar Moros-Ruano, a former Presbyterian mission co-worker, says “the gospel is proclaimed not only by word of mouth, but also through deeds.”

Moros-Ruano serves as pastor of the Congregation of the Resurrection and is a tenured professor of philosophy at Universidad de Los Andes (ULA) in Merida. Both in his pastoral work and his seminary teaching, Moros-Ruano says he has integrated leadership development as an evangelistic effort to share the gospel of Jesus to his congregations and students.

His Presbyterian congregation is using evangelistic efforts to bridge two sectors of the community separated by economics: upper middle class professionals and business people who live in expensive homes in the lower part of the neighborhood and the lower class manual workers, taxi drivers and others who live in homes up the hill in a poor neighborhood. The Presbyterian House sits in the center of the urbanized area where the two segments converge. He says there is often tension, but the congregation is helping connect the community. In addition to being a place of worship, the building also serves as a meeting place for the surrounding community.

When I took my first pastorate in the city of Maracaibo, Venezuela, Elisa was an active youth, very intelligent and alert. She brought a basic formation in the faith since she had been active in church life and had attended the Presbyterian schools in her native Barranquilla, Colombia. During my pastorate, she continued to grow: she was a Sunday school teacher, participated in courses and workshops developed for the Congregation, and sung in the choir. Some years later, as an ordained ruling elder, Elisa became one of my students in the theological education program developed by the Presbyterian Theological Seminary of the Great Colombia, Venezuelan Campus. Later on, she was ordained to the Christian ministry and took a pastorate in the city of Maracaibo. To this day, she considers me her pastor, teacher, evangelist and counselor. She remains my sister in Christ and my friend.

Alberto was one of my students in the Master’s program in political science at the University of the Andes in Merida, Venezuela. He was an excellent student. He was a member of a Pentecostal Church in Caracas, Venezuela, but started attending the Presbyterian congregation where I was a pastor. Our friendship grew and Alberto developed well both in his secular studies and his Christian formation. Once his Masters was finished, he expressed the desire to study for the Christian ministry in the Presbyterian Church. He enrolled in the Biblical Seminary (now Biblical University) in San Jose, Costa Rica in the extension program. Both of us continued sharing ideas and experiences during several years in the secular and theological realms. He finished his theological training and was ordained to the teaching ministry by the Western Presbytery of the Presbyterian Church in Venezuela. Later on, he earned two doctorates in secular disciplines. He is now a teaching minister for the Presbytery and a vice president of the Santa Rosa Catholic University.

Both Elisa and Alberto are developing ministries that integrate a holistic evangelism, each of them in their specific area: pastoral for Elisa, and church and university teaching for Alberto.

Moros-Ruano also witnessed how holistic evangelism transformed Spanish society when he served as a PC(USA) mission co-worker from 1999-2007 alongside his wife. While in Spain he was a professor at the SEUT, a Protestant theological seminary related to the Spanish Evangelical Church, which has Presbyterian and Methodist roots. He also preached and taught at several congregations, many in Madrid. Spain is known as a Catholic country, but he also found it highly secularized. For instance, the Centro de Investigaciones Sociologicas’ 2005 study shows that 79.3 percent of citizens consider themselves Catholic; although, 47.1 say they don’t attend Mass.

“To move in secularized Spain as a believer and Protestant pastor-professor is difficult because you appear as a rarity,” says Moros-Ruano. “Moreover, greater difficulties present themselves to Spanish Protestants and their institutions; they are a tiny minority in disadvantage from a legal point of view in spite of the new constitution adopted after the Franco years. The Roman Catholic Church is an institution with great privileges.”

“The Protestant Church faces a big challenge,” he says. “The period of the Spanish Civil War and later the years under the Franco dictatorship were of terrible hardship for Protestants. To witness for the faith was a heroic act. Even today, the effects of those hardships remain in the congregations. None the less, the church is being reborn with a witness and prophetic voice.”

Moros-Ruano says the seminary is playing an important role in the formation of leaders who are helping to guide churches in sharing the good news of the gospel in present-day Spain.

“I thank God for allowing me to participate in a small measure in the effort to make real a holistic evangelism, which can transform the Spanish society,” he says.

Dr. Moros-Ruano is a full tenured professor of philosophy at Universidad de Los Andes (ULA) in Merida, Venezuela. He is also an adjunct professor of political philosophy at Universidad Bolivariana de Venezuela (UBV) and professor of theology and Christian ethics in the Program of Theological Education of the Synod of the Iglesia Presbiteriana de Venezuela (IPV). He is a graduate of Princeton Theological Seminary and received his Ph.D. in Philosophy in 1984 at Vanderbilt University in Nashville, Tenn. He has written several articles, papers and books on theological education.