Support disaster response this hurricane season, GIVE NOW
Make A Donation Click Here >
Home › What We Do › Where We Work › Co-workers

Doug is periodically in the United States and available to speak to congregations as his schedule permits. Email him to extend an invitation to visit your congregation or organization.

In his role as facilitator for education for justice and peacemaking, Doug connects PC(USA) congregations and councils with indigenous Christians in Israel and Palestine. Doug’s extensive experience in the region as a PC(USA) regional liaison for Israel, Palestine and Jordan, mission co-worker, and peacemaking consultant and facilitator furthers his capacity to educate PC(USA) constituencies on the contextual realities of the churches’ witness in the region.

Through photography and information-sharing, Doug shepherds congregations and councils through the process of preparing for pilgrimages and other study trips. Doug’s work enables the larger PC(USA) community to advocate for peace and justice in Israel and Palestine.

For decades, the Presbyterian Church (U.S.A.) has promoted a just peace in the Middle East. Acting in solidarity with the Palestinian Christian community and partner churches across the Middle East, the church pursues peace in the region. Central to the PC(USA)’s Middle East peace initiative is the promotion of human values and human rights for all people, including the Palestinians. We stand alongside them in their quest for peace, and in the hope that the long-standing Israeli occupation of East Jerusalem, the West Bank and Gaza might end. The church advocates for the right of Israelis and Palestinians “to live in peace within secure and recognized boundaries, free from threats or acts of force.”

The Israeli occupation, with its many layers of oppressive practices and its consequences of crushing hardships, has contributed to a large exodus of Christians from Palestine. In 1920, about a tenth of the Palestinian population was Christian, but now estimates place the Christian population at around 1 percent. Despite declining numbers, the Christians of Palestine contribute a significant voice to the cause of reconciliation and peace in the Middle East.

According to Doug Dicks, Middle Eastern Christians have a major role to play in bringing peace to the Middle East. They bring to the table a commitment to Christ’s reconciliation and a deep understanding of the region’s culture. Though relatively small in number, Arab Christians have great potential to build bridges of understanding.

Christian influence, which began in New Testament times, is woven deeply into the history of the Holy Land. Christians make valuable contributions throughout the region in health care, education, and civic and political life. They look to Christians outside the region for solidarity and encouragement, and a large part of Doug’s job is to help fill that need.

Over the years, Doug has accompanied hundreds of Presbyterians who have come to the region seeking to walk alongside Arab Christians as well as to learn from them. He has also engaged with Israelis committed to peace, justice and the freedom of both peoples to live as caring neighbors. “I would hope that our ministry of presence in the region, particularly at this volatile and historic time, demonstrates the commitment on behalf of our church to accompany people where they are — whether in good times or in bad,” Doug says.

Through serving in a region where people are yearning for better lives, we are living in accordance with how Jesus Christ lived his own life. “I believe our ministry and mission should still be one of helping to give voice to the voiceless and empowering people,” Doug explains. “Though at times it can be politically sensitive to challenge the powers that be, I still believe that we are called to be faithful witnesses to Jesus Christ in whatever context we serve in. Our Lord challenged both the religious and political leadership of his day. I think we can do no less.” 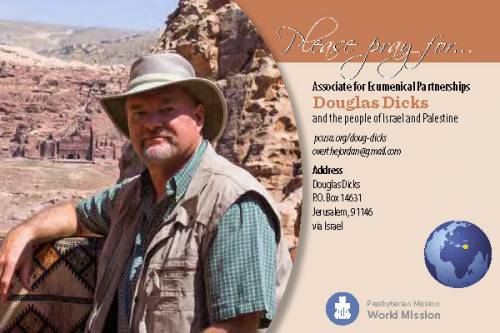 Doug Dicks facilitates relationships between PC(USA) congregations and the church’s mission partners in Israel and Palestine, and he resources Presbyterian groups who visit the region.…

Give in honor of the ministry of Doug Dicks