After a decade of destruction, displacement and devastation, what hope remains? 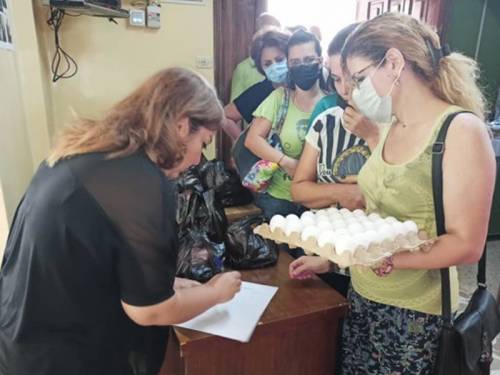 LOUISVILLE — Since conflict and violence began in Syria in 2011, at least two-thirds of Christians and two-thirds of health professionals have left the country, according to the Jinishian Memorial Program (JMP), a long-time partner of World Mission and Presbyterian Disaster Assistance (PDA).

For those who have chosen to stay in Syria — through ongoing war, economic instability and the COVID-19 pandemic — last year may have been the worst since the conflict started a decade ago. Sanctions imposed on Syria, in combination with the economic collapse in Lebanon, have made managing the virus nearly impossible, with a limited amount of care, equipment, medication and space available in hospitals. Shortages of food, fuel for cooking and heating homes, rolling electricity blackouts and the impact of soaring inflation have pushed millions in the country into even deeper poverty and food insecurity.

According to a recent article in the The New York Times, some women are selling their hair to be made into wigs, just so they can buy food for their families. Food prices have more than doubled in the past year, leaving 60% of Syrians (12.4 million people) at risk of going hungry — the highest number ever recorded.

Scared for her family’s survival, Maria, her husband and their two young sons fled Syria for neighboring Lebanon. Yet, after determining they could not afford daily expenses or food for their boys, ages 5 and 2, they made the difficult decision for Maria and the children to return to Aleppo while her husband remains in Lebanon to find sporadic work so he can send money home to his family.

“After nine years of war in Syria, our Armenian brothers and sisters finally saw some glimpses of normalcy,” said Eliza Minasyan, executive director of JMP. “The airport in Aleppo reopened and so did the highways. Conflict and hardship still ensued, but at least there was hope for rehabilitation and restoration.”

Then last March, COVID brought more hardship, Minasyan said. “Despite the pandemic, JMP remains dedicated to providing emergency relief services and programs to those in greatest need. Our committed and compassionate staff gear up in masks and gloves to provide health services and medicine to the ill, rent for those who need shelter, clothing to help keep people warm and food stamps so they remain nourished.”

The Rev. Dr. Laurie Kraus, director of Presbyterian Disaster Assistance, joined the Presbyterian Mission Agency staff in January 2013. One of her first international trips to meet church partners was to Lebanon and Jordan. Since that time with very few exceptions, she has been to Lebanon and/or Lebanon and Syria at least annually to continue accompaniment in collaboration with World Mission’s Middle East and Europe office.

“When I first went to Lebanon and also to Syria [2013], Lebanon’s economy was still pretty robust,” Kraus said. “The presence of refugees was minimal or at least not visible in the streets of Beirut.” She visited Sabra and Shatila, two refugee camps for Palestinians within the city of Beirut, and also a United Nations-sponsored camp that had maybe 100 people total, a communal kitchen on a concrete slab, a building with 10 to 15 showers and restrooms. The camp was run in partnership with a nearby community and the townspeople and mayor visited regularly to make sure people in the camp were doing OK.

As the conflict has continued three years, five years, seven years and beyond, Kraus has seen the number of refugees grow to tens of thousands. 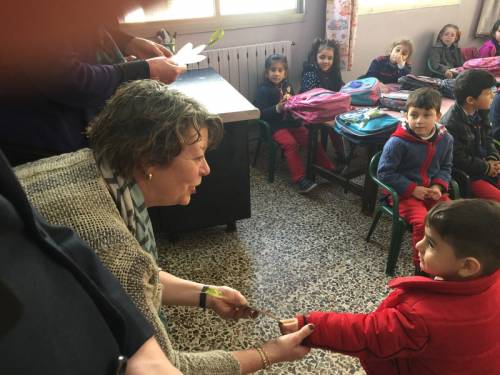 “It shifted from what felt like it was going to be a brief, interim strategy for short-term assistance to being kind of a chaotic overwhelm of the system, and over the 10 years, the UN and other international watchers would say that there were probably a million, maybe a million and a half Syrians in Lebanon. A lot of folks think the numbers were much closer to 2 million,” Kraus said.

Syria, she said, is still in a horrific situation. “There are still places where there is conflict, but even in the places where there isn’t conflict, the poverty is endemic. The rebuilding of infrastructure, housing, schools and cultural and civic relationships, particularly interreligious ones, is at a very, very fragile place.

“It’s been really extraordinary,” Kraus said. “The last partner consultation was in November, online. We’ve maintained and built those relationships through mutual listening, Bible study, theological reflection, conversation and tours of projects, while listening to people about their experiences. It’s been a really rich and particular way that NESSL has engaged and made the continuity of this work flow through the church.” 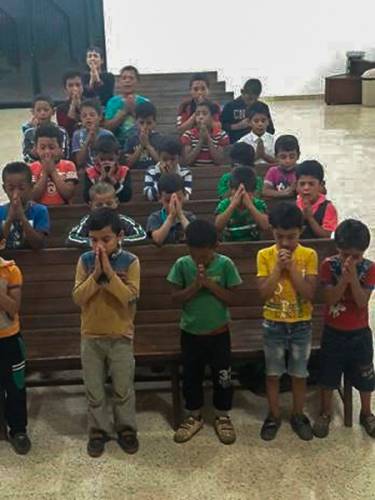 PDA and World Mission have engaged in a number of relief projects with global partners over the years, including NESSL, the Near East School of Theology (NEST), the Middle East Council of Churches (MECC), ACT Alliance (Action by Churches Together) and the Jinishian Memorial Program. These collaborative partnerships have resulted in projects such as: 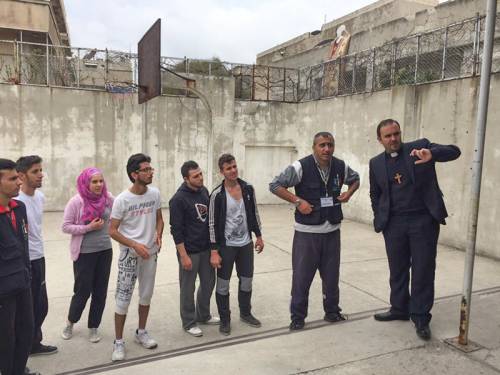 The Rev. Mofid Karajilli, founder of Space for Hope, a church-affiliated program of the National Evangelical Synod of Syria and Lebanon, brings together Muslim and Christian young people and children for sports activities and friendship. (Photo by Laurie Kraus)

“It’s been an incredible privilege to walk alongside the folks in Lebanon and Syria. They have my heart,” Kraus said. “I’ve built friendships there. I’ve preached in their churches. I was part of the ordination of the second woman ordained to the ministry in the Middle East. I’ve really felt the absence of not being able to be with those folks this year and last year. It hurts my heart not to be with them.”

The Syria and Lebanon Partnership Network (SLPN) continues to provide a comprehensive community of care through relationships built by World Mission and PDA. The network has members throughout the U.S. who provide advocacy and support of refugees, particularly resettlement efforts and humanitarian assistance in the U.S. and the Middle East. 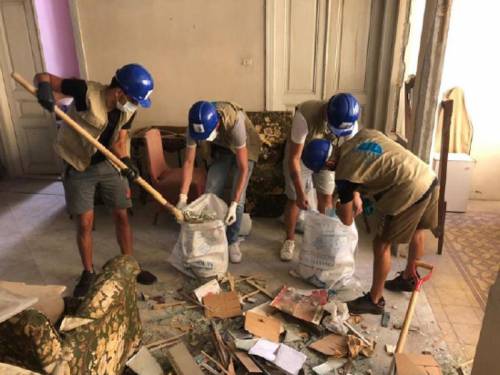 At the 2020 virtual gathering of SLPN, the Rev. Elmarie Parker, World Mission’s regional liaison to Iraq, Syria and Lebanon since 2013, talked about a Palestinian youth group and their leader who volunteered to help in cleaning efforts after a large amount of ammonia nitrate stored at the port in Beirut exploded on Aug. 4. More than 200 people died, at least 6,500 were injured and an estimated 300,000 homes were heavily damaged. The blast is considered to be one of the more powerful non-nuclear explosions in history. It was felt in Syria, Turkey and Cypress — more than 150 miles away. Following is an excerpt of a story of recovery efforts Parker shared during the SLPN online gathering. It is from the newsletter of the Joint Christian Committee, a PC(USA) partner:

“Less than an hour after the Beirut blast, Joint Christian Committee (JCC) youth leader Elias Habib began calling on his youth to get ready, making a mental list of things they would need: brooms, gloves, masks. About 20 youth met Habib in the JCC library later that evening. “For now, we will be helping with cleaning efforts,” he said. “Until we can help with the repairs, we will be covering their windows with nylon. Be ready when I call you.” Habib paused, as a foreman on many constructions sites and as someone who grew up during the vicious Lebanese 16-year civil war, he could forecast what awaited them. But this group of young people, ages 16 to 24, had yet to see such ferocious destruction or, even worse, feel the misery of hurt ones.

“Nevertheless, a few days later, the JCC located and settled in a small destroyed restaurant in the Mar Mikhael neighborhood — just one of several areas in the Ashrafieh region affected by the blast. They cleared out the debris and set up base. They soon joined the hundreds of volunteers who descended to the devastated areas, sweeping glass shards, setting aside torn doors and windows, and scrubbing blood off walls and floors. Since Lebanese government officials were absent in the field, it was up to the volunteers to help the distraught victims and salvage whatever they could from the debris. It was an overwhelming and emotional task.

“Day after day, the JCC group put up nylon sheets across windows and balcony doors and hauled down the stairs hundreds of bags filled with debris … But there was more than that. They were Palestinians (albeit Christians) — a word which, for years, brought contempt in many Christian circles. Indeed, many massacres and battles were committed by both groups against each other — Christian and Palestinian militias — during the Lebanese civil war. Habib’s father was severely injured during such fighting. Habib himself fled from area to area to escape the clashes.

“The JCC Palestinians were too young to realize the irony. They were aiding the very people who once upon a time were the enemies of their parents and grandparents.

“‘You are Palestinians?’ said one older woman, as the group hauled out the debris from her home. ‘And from the camp?’ Habib nodded slowly. The JCC youngsters looked oblivious to the question. They smiled cheerfully. The woman looked at the youths. ‘The government hasn’t been to ask about me,’ she said. ‘They didn’t come to clean my home and help me. But you did.’ She paused, then looked at Habib. ‘Curse the war,’ she said. ‘You are my brother.’”

In the past decade, Presbyterian Disaster Assistance has provided more than $700,000 to support grant projects of PC(USA) partners in Syria/Lebanon. Consider making an online gift through PDA for ongoing humanitarian response at this time of great need.

Resources
Facing the Human Tragedy in Syria
Syria Situation
To Breathe Free follows the five-year journey of a Syrian family fleeing the war in Homs to the refugee camps in Jordan and starting a new life in Washington, D.C.
Fact sheet on Syria