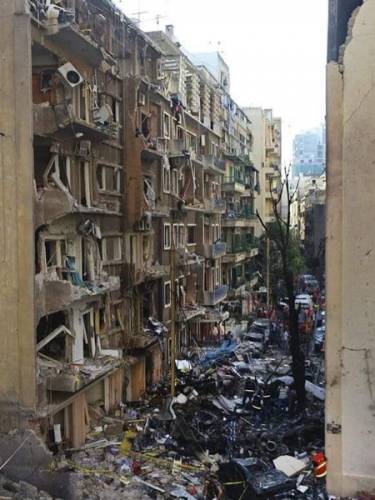 An Aug. 4 explosion at Beirut’s port has displaced more than 300,000 people. (Photo provided on Facebook by Najla Kassab)

LOUISVILLE — Relief efforts are under way in Beirut to help the more than 300,000 people displaced by the Aug. 4 port explosion that is now being called among the five strongest blasts in human history.

Officials say the force of the explosion was 20% as powerful as the atomic bomb dropped by the United States on Hiroshima, Japan on Aug. 6, 1945.

The blast caused significant damage to the port of Beirut, which acts as a storehouse for important commodities imported by the government, including wheat and fuel. About 70% of the trade exchange movement between Lebanon and other countries is shipped through there.

Presbyterian Church (U.S.A.) World Mission and Presbyterian Disaster Assistance (PDA) are working with the National Evangelical Synod of Syria and Lebanon (NESSL) on Project Beirut Hope to restore housing to 1,000 families displaced by blast through its diaconal arm, the Compassion Protestant Society (CPS).

“Today, the people of Beirut are living a tragedy, a nightmare, a complete apocalypse,” said the Rev. Joseph Kassab, general secretary of the National Evangelical Synod of Syria and Lebanon, a long-time PC(USA) partner. “The Church is obliged to show unity and solidarity with people in these difficult times. People are crying that any international support should not pass by the political class that has ruined the country and is standing ready to steal it one more time. Those innocent people who suffered the damage of the explosion will not be able to face this collapse on their own. They barely had resources to pay their basic needs before the blast. So just imagine how they can repair their houses and survive their days?”

CPS has been an independent entity of NESSL since 2018 but remains closely linked to the work and experience of the Synod in both Lebanon and Syria. The organization draws on the Synod’s extensive experience in educational and medical work in Syria and Lebanon, running regular grade schools, refugee schools and informal education projects (e.g. summer camps), medical clinics and nursing homes. Founded as a non-governmental organization, CPS strives to, it says, “combine the Christian ethos of NESSL with international development best practices and rigorous professionalism.”

The post-explosion immediate response was rushing medical support and providing food and shelter for displaced families. Now CPS is turning its efforts toward the renovation of houses and apartments.

“My daily prayer for partners and the wider community has become, ‘Lord, grant each one and each organization who is responding to this crisis the daily persevering energy, wisdom, and discernment needed to navigate the challenges and to meet those who are most vulnerable from this explosion with your compassionate care, empowerment and encouragement,” said the Rev. Elmarie Parker, regional liaison for Syria, Lebanon and Iraq. “For all families and individuals suffering loss and injury, sustain them with your daily provision of comfort, heart, courage and hope. For Beirut and her people’s rising from the ashes of this compounded catastrophe like the phoenix they so often reference, I pray.’”

Even prior to the port explosion, the COVID-19 crisis was escalating. Numbers reached record thresholds in recent weeks, deepening the health and economic crisis hitting the country since 2019.

Lebanon’s annual inflation rate surged to 89.74% in June, up from 56.53% during the previous month due to the escalating economic crisis and the nation’s collapsing currency amid political crisis. 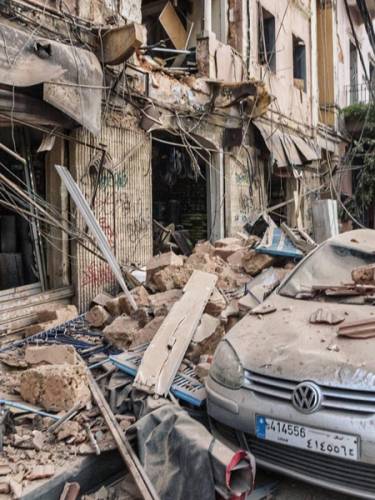 The Aug. 4 blast has added to the burden carried by the Lebanese people already dealing with COVID-19 and high inflation rates. (Photo provided on Facebook by Najla Kassab)

“The Lebanese people are very resilient, but the blast is yet one more blow on top of many recent blows,” said Rev. Scott Parker, mission co-worker who has lived in Beirut with his wife, Elmarie, for the past seven years. “Last fall, the lack of jobs and rising cost of living reached a breaking point and the revolution and protests began. Things got even more difficult for people, and then we got COVID-19, the failing economy, and now this. People are still holding on, but everybody’s struggling.”

The Rev. Dr. Laurie Kraus, PDA coordinator and the associate director for Compassion, Peace and Justice, is spearheading PDA’s response.

“The devastating aftermath of the massive port explosion in Beirut has left the city in shambles, destroying homes, businesses, and multitudes of neighborhoods, many of which are home to immigrants and refugees from Armenia, Palestine and Syria,” said Kraus. “The citizens of Beirut and Lebanon have been hosting and supporting millions of refugees since the war in Syria began in 2012, and their economy and stability have been challenged by rampant inflation, high unemployment and currency devaluation — and now, this catastrophic explosion that has killed and injured so many. I have walked these same streets so many times during the past eight years and basked in the warm hospitality of the Lebanese people and the beauty of Beirut and its glittering seaside. My heart is as jagged as the shards of glass that litter the streets of the city.”

Presbyterian Disaster Assistance is working with four partners in Lebanon and is disbursing solidarity grants to support the emergency response to multiple partners. It’s working with its ACT Alliance Partner, MECC (Middle East Council of Churches), to support a long-term response.