Will the Biden-Harris administration be able to make meaningful changes? 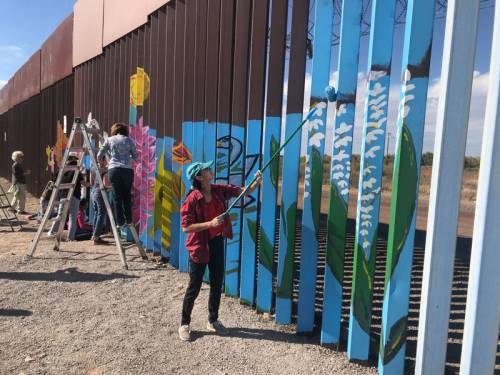 Jenea Sanchez, an artist and community college instructor, used flora and fauna to help design and paint a mural on the southern side of the border wall in Agua Prieta, Sonora, Mexico. (Photo by Mike Ferguson)

LOUISVILLE — During a webinar Wednesday evening, advocates for people seeking a better life in the United States expressed both optimism and uncertainty about the Biden-Harris administration’s ability to improve things at the U.S. southern border.

The webinar was organized by several groups that are part of the Interfaith Immigration Coalition, which is made up of more than 50 faith-based organizations, including the Presbyterian Church (U.S.A.), that are committed to the enactment of fair and humane immigration policies, including how asylum seekers are treated at the border.

“I have a lot of faith in the current administration that they’re trying to do it intelligently,” said Dan Klein of the Interfaith Welcome Coalition, a PC(USA) partner.

How well the administration does “remains to be seen, right?” Oaxaca said. “We’ve seen a lot of positive and welcome developments from this administration. But in some ways, what we’re asking for is the administration to go further, to not just rebuild what has been decimated but to strengthen the systems of protection that are available for people seeking humanitarian assistance.”

Oaxaca said that should include rebuilding and restoring the refugee and asylum systems as well as engaging in constructive regional dialogue in consultation with “civil society organizations that are already responding to the needs of people” on the ground. 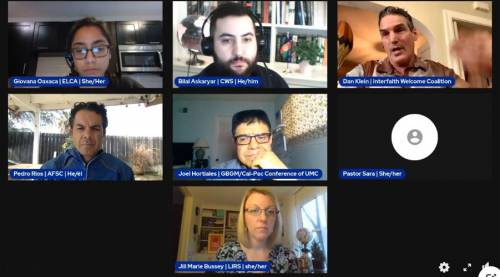 An immigration webinar was held Wednesday evening on Facebook. (Screenshot)

The webinar took place on the same day U.S. President Joe Biden announced that Vice President Kamala Harris had been designated as his administration’s point person on immigration issues at the border. She’ll be working with Mexico and other countries and trying to stem the tide of migrants.

In the beginning of the webinar, discussion facilitator Bilal Askaryar of Church World Service, a refugee resettlement agency, noted that it has been about a year since Biden’s predecessor, Donald Trump, effectively shut the border to asylum seekers under what Askaryar described as the pretext of an antiquated public health law, Title 42.

Recently, the spotlight has returned to the border amid reports of shelters being reopened to house unaccompanied children, families being turned away and other desperate situations, Askaryar said.

But “it’s not just President Trump that did this,” he noted. “It’s been a result of decades of deliberate policies done in our name at the border. The border has been militarized, our immigration system has been criminalized, and in the public imagination, we have all but forgotten that seeking asylum is a legal, lawful human right that is enshrined in both United States and international law.”

Jill Marie Bussey of the Lutheran Immigration and Refugee Service believes that meaningful reform is possible.

“It will require bold change and an independent immigration court system, due process to be honored, and really, seeing the face of God in every single person who is arriving — however they’re arriving  —  and honoring their dignity,” she said. “We can do it.”

Bussey praised the experience level of some of the people being appointed to various positions within the Biden-Harris administration. She highlighted the recent announcement of a Family Reunification Task Force led by Michelle Brané, who had been senior director of the Migrant Rights and Justice program at the Women’s Refugee Commission and held positions with the Lutheran Immigration and Refugee Service.

“They’re bringing in people who have a depth of experience working with vulnerable populations,” Bussey said. “By the leadership choices, I feel hopeful.”

Klein complimented the Biden-Harris administration on its willingness to communicate. “They’re listening,” he said. “They don’t have all the answers. They know it’s really difficult. They’re trying to figure it out.” 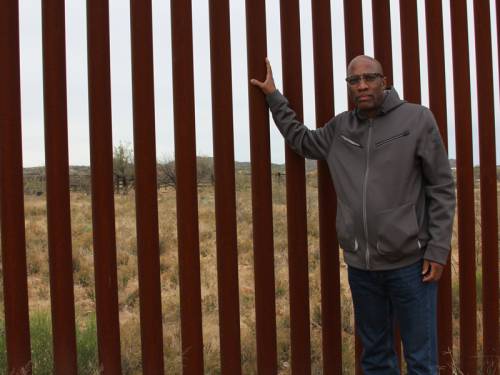 The Rev. Dr. J. Herbert Nelson, II, Stated Clerk of General Assembly of the PC(USA), stands at the border wall. (Photo courtesy of the Presbyterian Office of Public Witness)

The Rev. Dr. J. Herbert Nelson, II, Stated Clerk of the General Assembly of the PC(USA), issued a statement Tuesday saying that the situation at the southern border is of great humanitarian concern.

However, “we should be careful not to call it a crisis,” he wrote. “When we see the border as a crisis, we give ourselves permission to respond with military might, deterrence measures and trauma inducing methods. We imply that it is too much for us to handle.

“The real crises,” he continued, “are the root causes that force families to make incredible decisions to seek dignity and protection in another place. At our southern border, we ask that policies be implemented that meet these individuals, families and children with compassion and humanitarian aid.”

In Wednesday’s webinar, speakers offered several ways that the public can be of assistance, such as praying, reading sacred texts, studying U.S. history, educating others about border issues, contacting public officials, making donations and supporting foster care services for children separated from their parents.

“This is a great time to practice compassion,” Askaryar said after a pastor told the story of a mother and child who were traumatized by separation.

Following the webinar, Susan Krehbiel from Presbyterian Disaster Assistance said, “It was good to be part of organizing this webinar to bring more attention to the stories that are often missed in mainstream media — of the lasting and debilitating impact of past policies, the intricacies of developing a faithful response and the way everyday citizens are making a difference because they believe in the call to welcome the stranger.”

People who attended the webinar were invited to fill out an online form to receive a follow-up email with more detailed information on the many ways to take action.

“Providing welcome and speaking out against unjust policies are significant ways people can live out faith and offer support to asylum seekers,” said Amanda Craft of the Office of Immigration Issues, “because our silence is deafening. We need to lift up the voice of the migrant, the stranger and the newcomer.”

Presbyterian Disaster Assistance is one of the Compassion, Peace and Justice ministries of the Presbyterian Mission Agency. It is supported by your gifts to One Great Hour of Sharing.