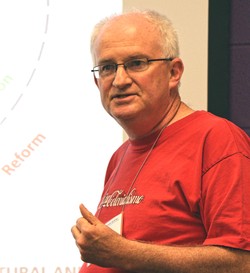 Louisville, August 14, 2015—The goal is clear: provide quality education for 1 million children by the year 2020. It’s a goal established through an initiative adopted by the 221st General Assembly of the Presbyterian Church (U.S.A.). The initiative, titled “Educate a Child, Transform the World,” seeks to participate in the work of global poverty alleviation, one of Presbyterian World Mission’s three critical global initiatives.

“I’m a believer in really big dreams and big visions, bold visions, says Rick Ufford-Chase, director of Stony Point Center, in New York, one of three PC(USA) conference centers. “The Educate a Child, Transform the World initiative excites me because it is a bold vision. I don’t think we have enough of them in the church. I think we generally tend to program ourselves to death with little individual projects, all of which are meaningful and important, but which do not bring a sense of the adventure that I think we are called to as followers of Jesus.”

“Elimination of poverty is the greatest challenge facing the world today and a prerequisite for sustainable global development,” said Frank Dimmock, catalyst addressing the root causes of global poverty for Presbyterian World Mission. “We know education works in transforming lives. It is the birthright of every child.”

Alleviating poverty through education in Guatemala

Steve Barrett, educational consultant, Centro Ecuménico de Integracion Pastoral (CEIPA) in Guatemala, works with children and youth who are too old  to attend public schools and have few other options.

“These are children and youth who are working to support their families, and for that reason they can’t go to school, because it doesn’t fit into their schedules.”

CEIPA provides classes for students, weekdays from 2 to 5:30 p.m., which gives them a chance to work mornings, evenings, and, in many cases, on weekends. As a children’s rights organization, CEIPA involves the children and youth in youth councils, working alongside city government in many municipalities. Since 2010, more than 4,000 children have participated in the human rights school.

In addition to two schools for elementary students and classes for students in seventh, eighth, and ninth grades, CEIPA also offers vocational workshops.

“At the heart of our educational model is ‘transformative education,’ Barrett says. “We work among the poorest kids in Quetzaltenango, many of whom believe they live in poverty because it is ‘God’s will.’”

“We ask the kids to evaluate their learning new learnings, attitudes, values they have modified,” Barrett says.

Alleviating poverty through education in the US

Rev. Janet Wolf, director of the Children’s Defense Fund Haley Farm and Nonviolent Organizing, in Clinton, Tennessee, is very familiar with bold visions. Wolf works closely with children’s rights activist Marian Wright Edelman, founder and president of the Children’s Defense Fund and the first black woman admitted to the Mississippi Bar in the mid-1960s. Wolf and Edelman rely heavily on education and advocacy to address a myriad of issues that keep children and youth from becoming all God intended them to be.

At a workshop at Big Tent 2015, in Knoxville, Tennessee, Wolf speaks passionately about putting a stop to the “Cradle to Prison Pipeline” that she, Edelman, and many others believe begins to funnel children, particularly black boys, into the juvenile justice system and adult prisons from the moment they are born. 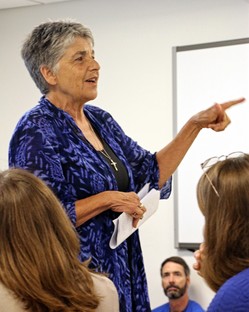 Speaking of the Christian temptation to pray about social issues without taking action, Wolf says, “We put things on God’s list of ‘things to do’ that we have already been given the power and the resources to do in this world.” She adds, “Presbyterians have been pretty persistent in putting flesh on prayers and engaging in some of the hard stuff that is happening in this world.”

“Every school day in America more than 16,000 students are suspended in the public schools,” Wolf says. “Almost 3,000 high school students drop out, and nearly 4,000 children and youth are arrested.

Wolf has listened to the dreams of men at Riverbend Maximum Security Institution in Nashville, some as young as 30, some of whom had never been in jail or convicted of anything before they were sentenced to death. As they sit in a circle and talk about wanting to help other young people on the outside, she says they talk of growing up without a childhood, defending and feeding siblings from an early age, struggling to remain in school.

She’s listened to the stories of young black males who are struggling to stay in school, high school students like E’darrius, Jermaine, and AJ, who want to help other young people stay in school and out of prison.

“E’darrius dreams of becoming a freelance artist,” Wolf says. “Jermaine, a social studies teacher, and AJ, a kinesiologist.” E’darrius is quick to point out that the Latin root of educate means to bring out. “He challenged us to bring out the gifts of all students we encounter.”

The “Educate a Child, Transform the World” campaign has international and national facets. The campaign is a joint effort of Presbyterian World Mission and Compassion, Peace and Justice. PC(USA) is joining with partners throughout the US and globally to provide quality education for 1 million children by the year  2020 by:

Donate to the international campaign to address the shortage of well-trained teachers and to provide infrastructure, learning resources, access, safety, and security at schools and en route.