About Jieun and Martin’s ministries

The nations of Korea, China, Japan and Taiwan have a rich and interdependent history. More than 1.5 billion people, about 38 percent of the population of Asia or 22 percent of all the people in the world, live in East Asia. The need for reconciliation among these East Asian nations is great after a long history of conflict, hostility, hidden agendas, and intentional denial of the past crimes. The two Koreas are working toward reconciliation after more than 70 years of tensions and hostility. The Korean peninsula was colonized by Japan from 1910 to 1945. After the defeat of Japan in World War II, the peninsula was divided into two zones. A capitalist–based government was established in the southern region, and a communist-based government was installed in the north. In recent decades, South Korea has become the thirteenth largest economy in the world and is home to large corporations. Almost 32% of the population identify as Protestant or Catholic. The PC(USA) began working in Korea more than a century ago, and the PC(USA) has strong partnerships with the Presbyterian Church of Korea and the Presbyterian Church in the Republic of Korea. South Korea has the highest percentage of Christians of any East Asian nation, with about 30% of the people claiming affiliation with a church. China is the world’s most populous country with a culture that is almost 4,000 years old. Many important elements of the modern world were developed in China, including paper, credit banking, the compass and paper money. Christianity was introduced in China in 635 CE by Nestorian missionaries.

Many Protestant groups, including the PC(USA), began sending missionaries to China in the 19th century. When the Communist Party came to power in 1949 it instituted a strict authoritarian rule. By the 1980s, governmental restrictions began to loosen, which resulted in the exponential growth of China’s churches and its economy. The Chinese government now reports about 25 million Christian believers. Japan is home to some of the largest and most technologically advanced producers of goods. More than 127 million people live in Japan, making it the 10th most populous country in the world. Most people in Japan consider themselves adherents of Shintoism, Buddhism or both. Fewer than 1% are Christian. From its rugged coasts to its high mountains to its bustling cities, Taiwan truly is beautiful and boasts at least16 indigenous people groups. Some of these groups may have been on Taiwan for at least 10,000 years. The Hakka people emigrated from China 400 years ago, while other more recent immigrants arrived in Taiwan with Chiang Kai-Shek in 1949. More recently, many people from southeast Asia have come to Taiwan for work. The diversity of people groups, languages, and cultures makes Taiwan a dynamic multicultural country.

About Martin and Jieun

Martin and Jieun met when they were both college-aged in Korea and soon discovered they wanted to live out their mutual call as servants of God. Martin points to Matthew 25:40 when he speaks of his call to be a Mission Co-worker. He says, “Jesus’ proclamation that, ‘What you did to the least of these, you did to me’ is about how we must share and support each other with humility. His desire to serve began when he was a very small child and saw himself as different from others.

Understanding himself as “different” led him to want to serve. When he and Jieun served in China as Diaconal Workers from 1994-1998 he felt the burden of being an Asian-American. He has felt the burden of representing the entire ethnic Korean people, in the US. Now, as he is returning to Korea, he wonders if the Korean people will see him as a fellow Korean or as an American.

As a beloved and respected pastor by Anglo and Korean congregants, Martin is uniquely situated to be an interpreter of East and West. His and Jieun’s service in China as Diaconal Workers from 1994 to 1998 had a profound impact on Martin. He reveals, “Although it was only four years, our experience in China has nurtured my ministry here in US for twenty years. My memory of the Chinese Christians’ devotion, vitality and excitement still lingers in my heart, drawing us like a magnet to the region again. I often tell the stories of the Chinese Christians their in my sermons to challenge believers here in US.” The vitality of the Chinese Christian church is evident in the fact that the growth rate of the Chinese Christian population is four times faster than the population growth. The truth that “Mission flows bilaterally” is embedded in Martin’s vision of reciprocity and respect. “In mission,” Martin notes, “it is not clear cut who is the greatest and who is the least. It’s not giving but sharing, not helping but participating. We are serving the whole region of East Asia, and it will be more than bilateral: it will be multilateral. We are excited to see mutual sharing, supporting and learning.” Martin will use his understanding of honoring differences to mitigate the tensions in East Asia: between China and Hong Kong, China and Taiwan, South and North Korea and more. He and Jieun will participate in the peace and reconciliation efforts of the partner churches in the region, and lovingly invite everyone to join in this effort.

This loving approach to ministry is evident in Jieun’s story. As a first-generation Korean-American Presbyterian clergywoman, she has had to navigate between cultures all her life. She confides, “I did not grow up with American culture. It took me a while to find my identity in this country and culture. My call to the ministry and mission service was neither dramatic nor sudden. Rather, it was a life-long fermented process, like fermented food such as kimchi, bread or wine. Fermentation is a process in which an organic substance breaks down into a simpler substance. You need the patience to let it sit for a while, and the process could be messy and smelly. However, the process brings a beautiful change and transformation in the end. Likewise, God has called me out of my peculiar context throughout my life journey. At the same time, it was a realization and response to an inner voice that gradually invited me. I feel God has called me to mission service and has continued to shape me for mission service. My sense of call is profoundly rooted in my unique identity, gifts and skills that have unfolded as I have come to know both God and myself in local and global community. Now God has called me to keep “finding my voice” in the next chapter of my life in East Asia.”

Jieun remembers some moments that God showed God’s grace to help her find her voice in different contexts. She remembers being asked to be one of the preachers of the plenary session during the 2018 Presbyterian Women (PW) Churchwide Gathering. At first, when the PW plenary committee asked her if she would be one of the plenary voices, her immediate reaction was “Who, me? Surely, no!” She was not sure if she was ready to preach to 5,000 women, but she accepted the invitation with courage. She challenged and encouraged her fellow Presbyterian women to go beyond their comfort zone to be with the vulnerable and the estranged. Jieun proclaims, “God paradoxically utilized my vulnerability as a strength to inspire and empower the entire gathering It was an amazing and empowering experience.”

Now God is calling Martin and her to be strangers again. They will cross the Pacific and settle in a new context. They are confident that God continues to call them to find voices of empowerment and reconciliation as God’s beloved children facing challenges and responding to God’s invitation to participate in God’s mission. They are truly excited and grateful for their new roles and are looking forward to their journey.

Jieun and Martin are the parents of two sons and a daughter; Sol, Gale and Sami. Sami will accompany them to South Korea. Martin and Jieun hold Master of Divinity Degrees from Louisville Presbyterian Theological Seminary and are members of Mid-Kentucky Presbytery. 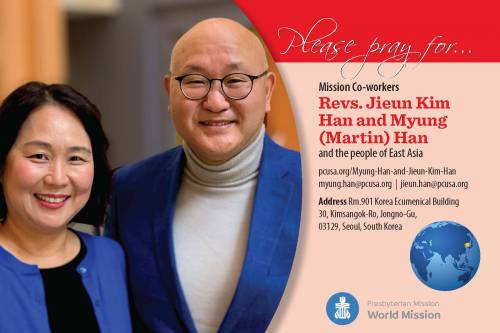