Support disaster response this hurricane season, GIVE NOW
Make A Donation Click Here >
Home › ‘Do the work your soul must have’ 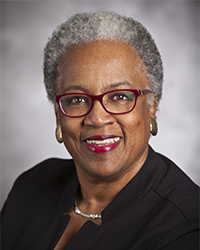 LOUISVILLE — The Rev. Dr. Katie Geneva Cannon “would have been appalled” by the heartfelt and spirited salute she received Saturday by about 80 people gathered at Second Presbyterian Church in Louisville, according to the Rev. Dr. Teresa L. Fry Brown.

“She didn’t seek accolades,” said the Bandy Professor of Preaching at Candler School of Theology at Emory University in Atlanta in what was equal parts sermon and stirring tribute to her friend and mentor. “She just did the work.” 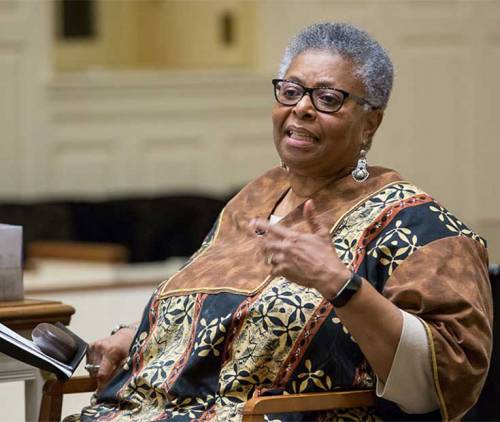 A favorite Cannon theme, Brown said, was “widening the margins of biblical texts to allow us to see ourselves in the Bible.”

Then the daughters of Zelophehad came forward. Zelophehad was son of Hepher son of Gilead son of Machir son of Manasseh son of Joseph, a member of the Manassite clans. The names of his daughters were: Mahlah, Noah, Hoglah, Milcah, and Tirzah. They stood before Moses, Eleazar the priest, the leaders, and all the congregation, at the entrance of the tent of meeting, and they said,  “Our father died in the wilderness; he was not among the company of those who gathered themselves together against the Lord in the company of Korah, but died for his own sin; and he had no sons. Why should the name of our father be taken away from his clan because he had no son? Give to us a possession among our father’s brothers.”

Moses brought their case before the Lord. And the Lord spoke to Moses, saying: “The daughters of Zelophehad are right in what they are saying; you shall indeed let them possess an inheritance among their father’s brothers and pass the inheritance of their father on to them.”

“Use your own words,” Brown advised those gathered to honor and remember Cannon. “That’s the topic for today. Words help us tell the truth, they can change lives and save humanity. Words have power.”

It took five women to change Israel, noted the Rev. John Odom, Presbytery of Mid-Kentucky’s presbyter for community life, but only one — Cannon — to change the PC(USA).

These days, Brown delivers powerful thoughtful sermons in rapid-fire manner. But as a girl, she said, she’d hunch her shoulders and mumble. “I don’t know what your shoulders mean,” her mother would tell her. “Open your mouth and use your words.”

That’s what Zelophehad’s daughters did. “They weren’t letting anybody mansplain for them,” Brown said. “They avoided the withering stares of people in the temple, and some of you have had to do that. Why wait for someone else to rescue you?”

The action of these sisters “was astounding,” she said. “They didn’t become spiritual Muppets moving to the beat of someone else’s speech … These sisters were no longer background players, no longer hidden figures someone has to make a movie about. Their voices affect property rights even today.”

Of course, speaking one’s mind sometimes means “someone is going to say, ‘You need to shut up,’” she said. Then Brown quoted the novelist Zora Neale Hurston: “If you are silent about your pain, they’ll kill you and say you enjoyed it.”

Cannon was one to help her students turn aside unhelpful assumptions, Brown said.

“Dr. Cannon strove to have persons get rid of conditional stereotypes of women found in the biblical texts,” Brown said, “like sin-bringing Eve and hen-pecking Jezebel and prostituting Mary Magdalene and conspiring Sapphira.”

“When we use our words, God hears the groaning of our spirits so God can do for us what God has done for people across history,” Brown said. “God delivered Eve from spoiled produce and Hagar from desert death … and Shiphrah and Puah from political pressure to kill baby boys … Ruth from survivor’s grief, Naomi from bitterness and Hannah from childlessness … and Elizabeth from menopause, and Mary the Mother of Jesus from public disgrace and the bride at Cana from a wedding disaster … and Martha from throwing shade … the woman with the issue of blood from poor health care … the woman at the well from toxic relationships … and Lydia from selecting fabric down by the riverside — but they all used their words and were given forgiveness and were given an inheritance.” 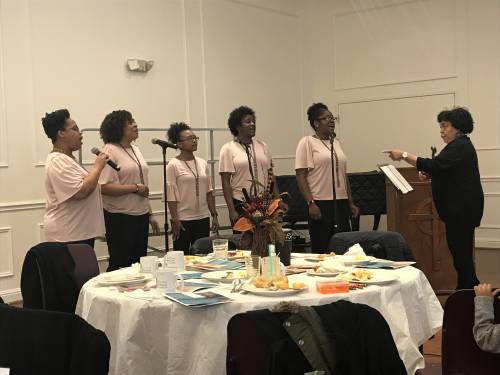 Also as part of Saturday’s Legacy of Faith Breakfast, put on by Crossroads Ministry, a ministry of Second Presbyterian Church, Louisville-based Committed Choir delivered rousing a cappella gospel renditions of such songs as “Walk in Jerusalem Just Like John” and “Ride the Chariot.”

“Katie was brilliant and remarkable,” said the Rev. Dr. Rhashell Hunter, director of the Presbyterian Mission Agency’s Racial Equity & Women’s Intercultural Ministries. “But what I loved about her was that she was humble and down home. She would recognize the gift in you sort of like your aunt or mother would do. One of her objectives was to make visible our curious invisibility. “And,” she added, “she was ridiculously funny.”

The Rev. Dr. Diane Moffett, president and executive director of the Presbyterian Mission Agency, said she’s one who “stands on the shoulders” of Cannon.

“I would not be here if it were not for women like she who used her own words,” Moffett said, “and had the audacity to stand flat-footed and bold in the midst of rejections.”

Moffett said the scholarship established in Cannon’s name “will make sure women of color have the opportunity to develop ourselves and become the best that God has created us to be.”

Click here to donate to the scholarship fund to honor Cannon’s substantial legacy.