Matanzas seminary serves as an adjunct hospital for its region 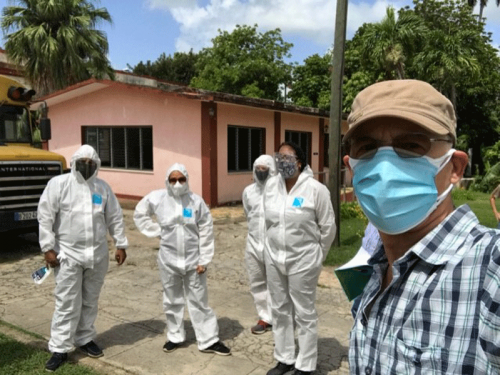 Health care workers in Cuba are briefed before they begin patient care. (Photo by Carlos Hamm)

LOUISVILLE — On Sunday, thousands of Cubans from throughout the country took to the streets protesting dire economic conditions and a dramatic surge in COVID-19 cases.

With a rising COVID rate and shortages of just about every necessity imaginable, the protests are said to be the largest since those held during the summer of 1994. The government responded most recently to the crowds in some of the cities where there was violence and looting.

Adding to the lingering fear over the embargo, the economy and the health crisis, another layer of concern burdening Cubans is the fear of a military invasion by the U.S. being called for by some U.S. politicians.

“As churches walking in partnership — PC(USA) and the Presbyterian-Reformed Church of Cuba (IRPC) — together we reaffirm our mutuality and support in working in solidarity in favor of the Cuban people, and their right to decide their own future without interference from outside,” said Valdir França, area coordinator of World Mission’s office of Latin America and the Caribbean.

França said there is a lot of misinformation spreading as well as calls to violence on social media from outside the island. He talked by phone with IPRC leadership, who are asking for prayers. He said he has also been in contact with the Cuba Partners Network and other Latin American groups seeking ways to support the church in the ongoing crisis.

“Even though disturbances like those from last Sunday have stopped in the country, there is an uneasy calm,” said Carlos E. Hamm, principal of the Matanzas seminary. “As churches, we are interceding for our people, giving comfort, care, producing and sharing sense, offering messages of faith, strength and hope, as well as dialogue, reconciliation, and peace with justice.”

After a prayer vigil with Cuban pastors on Tuesday evening, IRPC drafted this declaration:

“The Presbyterian-Reformed Church in Cuba (IPRC), faithful to its vocation of service to our people and to its patriotic and pro-independence roots, faithful to its call to always seek the Kingdom of God and God’s justice — we want to make a call:

“We affirm that the gospel which we have been called to preach will always be the good news for the world, justice, and peace for ‘the little ones’ and abundant life for all Creation. And for that we will continue to work tirelessly.” 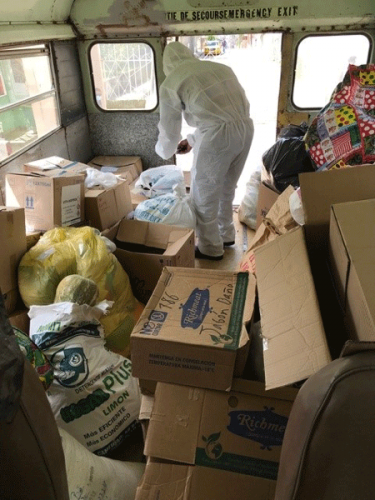 Supplies from within Cuba arrive at the seminary. (Photo by Carlos Hamm)

França said that on Wednesday, the Presbytery of Havana took a bus loaded with food and some other basics donated by the churches in that presbytery to support Matanzas, which has been important in caring for people on the island struck by the virus — especially children.

“Last month the only pediatric hospital in the province of Matanzas exceeded its maximum capacity,” said Hamm. “The Ministry of Public Health of the province requested the help of the Seminary to serve as an annex center of the children’s hospital to accommodate children who were considered suspicious of having contracted COVID-19 with their companions. We immediately agreed, following the long traditions of our institution of service to the civil society.” 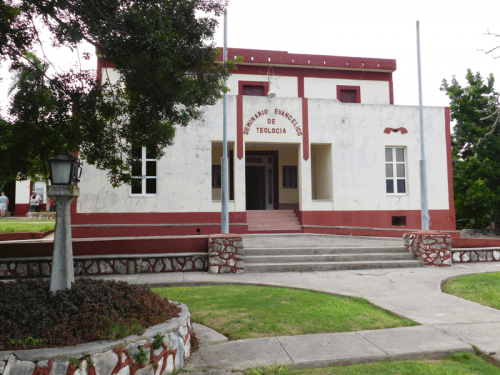 The Matanzas seminary, which is currently closed, has been turned into an adjunct children’s hospital. (Photo by Kathy Melvin)

In 1946, the Methodist, Presbyterian and Episcopal churches founded the Matanzas Evangelical Theological Seminary Evangelical Seminary. It’s one of only 10 Christian seminaries in Cuba and the only one operated by multiple denominations.

Within the PC(USA), the Office of the Stated Clerk, Presbyterian World Mission and the Office of Public Witness in Washington, D.C., are drafting a letter of solidarity to be sent to church partners in Cuba.

“We greatly appreciate your consistent solidarity accompaniment through your prayers and through public advocacy to lift the blockade, which damages directly our bilateral mission relationships,” said Hamm. “The blockade hinders the possibility to send financial resources to our seminary, including other countries, because of its extraterritorial nature. We request an international campaign to oppose a military intervention against our country incited by politicians in that country (the U.S.), especially those of Cuban origin.”