This article originally appeared in the September/October 2016 issue of Presbyterians Today. 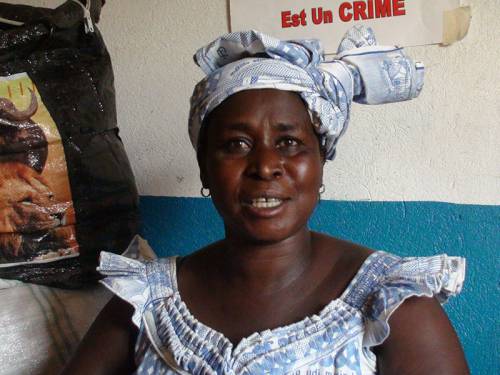 Neema Androsi and other women confronted militia leaders to advocate for peace in the Democratic Republic of the Congo. (Photo courtesy of Christi Boyd)

Tired of their country’s civil war and related atrocities, some church women in the Democratic Republic of the Congo bravely walked to the hiding place of a notorious warlord in March 2013, seeking peace.

The delegation was made up of members of the Federation of Protestant Women in Congo, which includes women in the Church of Christ in Congo, a Presbyterian Church (U.S.A) partner. Echoing the weariness of communities in Ituri province, the women told militia leader Cobra Matata they were “fed up with the war,” says delegation leader Neema Androsi.

Matata was surprised by the bold gesture, and he listened to their appeal. While he did not agree to lay down his arms, the women vowed to persist in their work for peace. They paid three more visits to Matata and his officers, and in November 2014 Matata turned himself over the Congolese army. The women, having heard when Matata planned to surrender, gathered that day for prayer and worship not far from his hiding place.

Matata took advantage of the Congolese government’s standing offer to give senior army positions to demobilized rebel leaders. Several of Matata’s militia members also gave themselves up to the Congolese army.

The concessions offered hope amid armed conflict that continues to rage in the eastern part of the country even though the civil war officially ended in 2003. More than 5 million people have been killed, and terror threatens to strike communities at any moment. Gang rapes are common and so is the conscription of child soldiers.

Such atrocities prompted the women to put aside fear for the sake of peace. “To come before weapons, you always have to be fearful,” Androsi says. “It wasn’t easy, but I prayed in my heart, saying, ‘Lord, give me courage so I am able to take this on.’”

Presbyterians stand in support of courageous people around the world and across the United States who faithfully work for peace and reconciliation. Many are involved in ministries that are sustained through gifts to the Peace & Global Witness Offering. Fifty percent of the offering goes to the national church, 25 percent is retained by congregations for local ministries, and 25 percent goes to presbytery ministries. While the offering can be taken at any time, most congregations receive it on World Communion Sunday, which is observed annually on the first Sunday in October.

On World Communion Sunday, Congolese Christians will celebrate their unity with believers across the globe, and, as they do every Sunday, they will pray for peace in their country. Some of Matata’s soldiers are still armed and fighting, and there are many more rebel groups struggling for control of land and Congo’s vast mineral wealth. Brutal murders and other acts of terror continue.

Yet the Protestant women of Ituri and others maintain their pursuit of peace. One of the Protestant Women’s priorities is to convince the rebels who once served under Matata to cease hostilities. “The women are still in action,” Androsi says. “We haven’t yet quit our visits” to the rebels’ hiding place.

Thousands of miles from Congo, two Denver congregations are healing a breach devoid of the malice and violence that afflict Congo, but they consider it a lamentable chasm they want to repair. 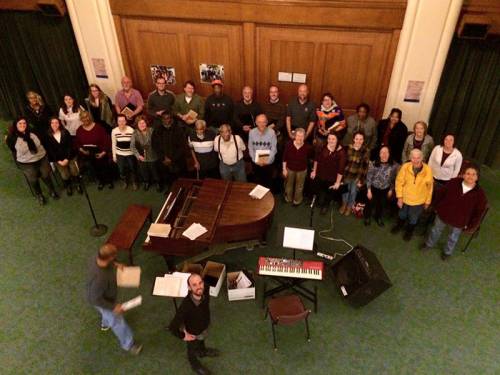 Central Presbyterian Church and Peoples Presbyterian Church in Denver are seeking to mend the racial divide that occurs in most churches on Sunday mornings. They hope the joint worship will lead to deep and personal conversations about race. (Photo provided)

They began the effort on Martin Luther King Day this year. Central members traveled the 2.3 miles that separate the two congregations to worship with Peoples. The following Sunday, Peoples visited Central.

“There was this mutual feeling that this is amazing,” says Louise Westfall, Central’s pastor. “I can only attribute it to the Spirit.”

Relationships formed quickly between members of the two congregations. After the joint worship service at Central, the host of a Central women’s group invited the women of Peoples to join them in her home. Eight women from Peoples attended.

Not long afterward planning began on a joint women’s retreat, and Peoples hosted a vacation Bible school with children from both churches attending. Two additional joint worship services were held last spring, and more are anticipated. “In past times, we had pulpit exchanges, but this is something much more than a pulpit exchange,” says Westfall. “It’s a desire to be together.”

Theresa Varnado, a ruling elder at Peoples, is enthusiastic about the increasing level of understanding between the two congregations and the exchange of ideas about ministry.

“Sometimes the ideas we share just among ourselves can become redundant,” she says. “When we spend time in community, conversing, and participating in joint activities, the opportunity to learn new and fresh ideas is greater. We are building bridges as well.”

The growing relationship between Central and Peoples has led Westfall to take steps to develop interracial relationships in her social circles. She says that “until we break down social barriers, until we count among our friends people of color, we are going to remain separate.”

The joint worship services that set in motion the relationship between Central and Peoples were part of a Colorado Council of Churches initiative called Soulful Sunday.

“Soulful Sunday began as an acknowledgment that the body of Christ is broken in many ways,” says Adrian Miller, executive director of the Colorado Council of Churches. He notes that in the United States one of the most enduring sources of this brokenness is race. The hope, he says, is for congregations to move beyond worshiping together and build relationships. Soulful Sunday is one way Denver Presbytery promotes inclusiveness. Tom Sheffield, presbytery pastor, admits that simply holding joint worship services can be superficial.

“But,” he says, “the experience of Central and Peoples shows that they can lead to deeper relationships and honest conversations about each other’s lives.” Denver Presbytery uses a portion of its Peace & Global Witness Offering receipts to support the Soulful Sunday initiative across Colorado.

Around the PC(USA), other congregations are finding creative ways to promote peace and reconciliation. One is Columbia Presbyterian Church in Decatur, Georgia, which developed an imaginative initiative for peace based on the prophet Isaiah’s vision of turning swords into plowshares. 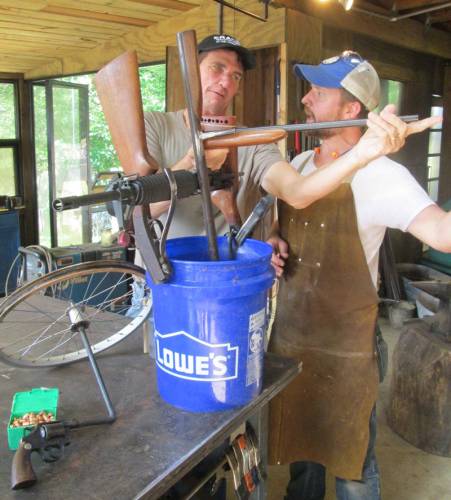 Jason Smith, an artistic blacksmith from Decatur, Georgia, and Jim McGill, PC(USA) mission co-worker in Malawi, work on creating a rope pump out of repurposed guns. Smith made the pump with metal from an AR-15 rifle, a .38 caliber handgun, and two single-barrel shotguns. A wheel from a baby stroller is also part of the design. Commissioned by Columbia Presbyterian Church in Decatur, the pump is the centerpiece of a fundraising effort aimed at purchasing African-made pumps that will be used in Malawi, where thousands of people lack access to safe drinking water. “We just thought it (the pump) would really show what ‘swords into plowshares’ is really all about,” says Tom Hagood, pastor of Columbia Presbyterian. (Photo courtesy of Michael Fitzer, 180 Degrees)

Columbia is converting guns into rope pumps, turning instruments used to inflict death on America’s streets into an idea to deliver well water to thirsty people in Malawi.

The congregation collected guns from among themselves and people in the community and gave them to artistic blacksmith Jason Smith, who in May forged a working rope pump from them. It was made with metal from an AR-15 rifle, a .38 caliber handgun, and two single-barrel shotguns. A wheel from a baby stroller is also part of the design of the pump. Smith crafted the pump from a model of a common type of rope pump used in Malawi.

The pump is being displayed around the community to symbolize the congregation’s conviction that there are too many guns in society and too few resources devoted to meeting human needs. Those who agree are invited to make donations toward the purchase of African-made rope pumps for Malawi. Columbia’s pastor, Tom Hagood, says the pump can help generate badly-needed dialogue on the gun issue.

The endeavor is “not so much an anti-gun campaign” but rather an effort “to use the pump itself as a symbol to bring folks to the table to begin some dialogue,” he explains. “We really believe there are good people on both sides of the issue, and we think there are some common-sense laws that could be put into place to curb some of the access to guns.”

As gun-related deaths claim thousands of lives annually in the United States, children around the world are dying from a lack of safe drinking water, he observes. “We just thought it would really show what ‘swords into plowshares’ is really all about.”

The idea for addressing gun violence and the need for water in Malawi simultaneously came about during a conversation between Hagood and Presbyterian mission co-worker Jim McGill. McGill and his wife, Jodi, have worked with Malawian partners for more than 25 years to bring safe drinking water to Malawi, and they have attended Columbia when they have been in the United States.

Millions of people in Malawi lack access to a reliable source of clean drinking water. More people die from water-related diseases like typhoid, cholera, and hepatitis A than from AIDS. In recent years, erratic rainfall and flooding have added to Malawi’s challenges. Crop yields are down significantly, and many have been left without a reliable source of nutritious food. Rope pumps can help mitigate both of these problems by providing safe water for Malawian families and irrigated water for their crops.

“If we can prevent one death and help a village get water, it’s worth our effort,” Hagood stresses.

In places far and near, ministries supported by the Peace & Global Witness Offering curb violence and promote reconciliation. For more information and to support the offering, visit specialofferings.pcusa.org/peace-global.