LEXINGTON, Kentucky — In the hours after a gunman killed 10 people and injured three others in a racist attack on a Buffalo, New York grocery store, Presbyterian Disaster Assistance (PDA) contacted the Presbytery of Western New York to offer support to the community.

Since then, PDA has been in dialogue with Presbyterians in the Buffalo area, and veteran National Response Team member the Rev. Pat Ashley was deployed to Buffalo.

“I found my own self overwhelmed,” said the Rev. Micah Nutter Dowling, an active pastor in the Presbytery of Western New York. “And it was at that point in the middle of the week that PDA arrived and was there to hold my hand through the emotion of having people contact me who had not reached out in quite a while, who wanted to do something, and trying to provide the wisdom on how to do that well, and the sensitivity that’s needed.”

Dowling and his wife, the Rev. Katelyn Nutter Dowling, associate pastor for Christian Education at Westminster Presbyterian Church in Buffalo and in-coming council moderator for the Presbytery of Western New York, spoke to Presbyterian News Service Thursday in a video interview to discuss how churches and PDA have been responding in the Buffalo area since the May 14 attack. Joining them were Ashley and the Rev. Jim Kirk, PDA Associate for National Disaster Response.

You can see a lightly edited version of the interview above or by clicking here.

The Dowlings, who live just a few blocks from the grocery store where the massacre took place, say one of the keys to their response has been relationships that were already established, particularly in Buffalo’s Black community.

“When the George Floyd shooting happened two years ago, the presbytery formed an anti-racism task group, and our church, Westminster Presbyterian Church, has an anti-racism task group going back, I think, to the ’80s,” Katelyn said. “And so, we weren’t just plopping down in Black communities, trying to make relationships immediately in the aftermath of such a horrific shooting. We were actually building on relationships that, thank God, we had already started.”

This was especially important, she said, given the racist motivation for the attack.

Ashley said the established relationships were immediately evident when she arrived in Buffalo. But the pastors acknowledge even though they and their church have been actively building relationships, they still had blind spots the shooting revealed, like the impact losing the neighborhood’s one grocery store would have when it was closed after the shooting.

“I said this in my sermon on Sunday: How dare we call ourselves ‘the City of Good Neighbors’ when one grocery store closing could cause such food insecurity for thousands of Buffalonians,” Katelyn said, referring to a popular nickname for Buffalo. “Black Buffalonians are six times as likely to not have a grocery store in their neighborhood as white Buffalonians.” 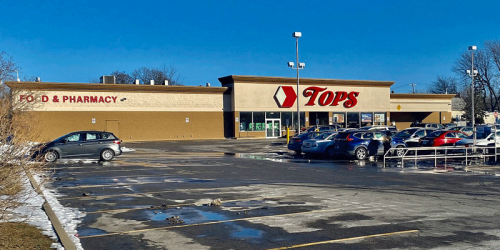 The Tops supermarket in Buffalo, New York, where a mass shooting on May 14 took 10 lives. The supermarket has closed, at least temporarily, leaving many residents in its majority Black neighborhood with no source for food. (Photo by Andre Carrotflower via WikiMedia Commons)

The tragedy has reinforced to the Dowlings the need to be good neighbors and allies to people who are marginalized in their community to “help fight for a city that works for everyone,” Micah said.

Katelyn said the last couple weeks have also given her a greater appreciation for the church at large.

“I’m Presbyterian on purpose,” she said. “And one of the purposes is because I believe in the connectional church, and when news was hitting here in Buffalo, what was happening, within 24 hours we received a letter from the Presbytery of Southern New England, which is where the Sandy Hook shooting happened 10 years ago, to let us know that they were in prayer for us walking alongside us. Offering us their resources was a healing balm. That was one of the only healing balms during that time.”

Presbyterian Disaster Assistance is able to respond quickly to emergencies thanks to your gifts to One Great Hour of Sharing. It is one of the Compassion, Peace and Justice ministries of the Presbyterian Mission Agency.