Educational fund will benefit children of hero who tackled gunman

LOUISVILLE — It would be easy to speak of vengeance after a gunman opened fire on innocent church members, killing one person and injuring five others, but the Rev. Albany Lee of Irvine Taiwanese Presbyterian Church (ITPC) speaks of love and the healing power of God.

The mass shooting occurred on May 15, as ITPC members and guests were gathered at Geneva Presbyterian Church for a lunch reception in Laguna Woods, California, where mostly older people were present.

“You never, ever imagine that it would happen to you, and that is tragic,” said Lee, ITPC’s pastor. “When the church, the safest place on Earth, becomes a killing field, that really made me cry.”

But instead of expressing bitterness, he says, “We should champion more love. Only love can conquer evil.”

Investigators have arrested David Chou, 68, of Las Vegas on suspicion of murder and attempted murder, according to the Orange County Sheriff’s Department. He reportedly chained the doors of the church and put glue into the keyholes before he started shooting.

“People believed he was actual security and so didn’t suspect too much,” said Lee, who was unable to attend the reception but has heard accounts of the shooting those who were present.

The attack seemed to have been planned for a while, said Lee, whose church has had space at Geneva Presbyterian since 2009. “From the evidence they recovered, they do believe he was going to create more damage to the church (building).”

Dr. John Cheng, a 52-year-old sports physician, was killed when he tried to stop the gunman by tackling him, according to the sheriff’s department. “He sacrificed himself for us,” Lee said. 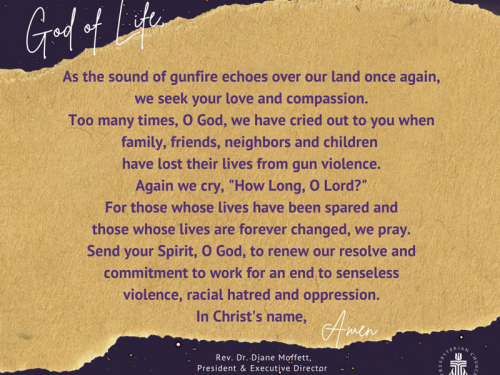 The Rev. Dr. Diane Moffett, president and executive director of the Presbyterian Mission Agency, offered this prayer following the May 15 shooting.

The mass shooting has sparked an outpouring of concern and condolences from across the country and also from Taiwan, whose president has condemned the shooting. An international audience of more than 1,000 turned out for an online vigil organized by the Southern California Taiwanese Presbyterian Conference last week.

ITPC members “feel the love, the comfort, the care from all over the world,” including Canada, mainland China and Taiwan, Lee said. “I’m still trying to reply to them one by one.”

The Rev. Dr. J. Herbert Nelson, II, Stated Clerk of the General Assembly of the Presbyterian Church (U.S.A.), released a statement on the ITPC shooting as well as a mass shooting that resulted in several fatalities at a grocery store in Buffalo, New York.

Nelson’s statement said in part, “Our hearts break not only for the victims and their families, but for the impacted communities who must now work to heal the wounds and find words that can comfort and reassure.”

Elsewhere in the statement, Nelson asked, “How many more lives must be lost? How much more blood must be shed before we throw down our guns and silence the voices of hate?”

The shooting occurred during an ITPC reception/banquet for a pastor who had recently returned from Taiwan.

Authorities have said the shooting was fueled by politically motivated hate; Chou apparently was upset about tensions between China and Taiwan. While Lee declined to comment on that, citing the pending investigation, he did note that hate can build up in the human heart and that it usually takes more than a day.

“I cannot really say anything for him,” he said of the suspected gunman, “but I just hope that God will heal his heart, and no more hatred.”

Lee added, “We should preach more love, not revenge or anything that comes from the evil and (would) make us become part of the evil. … We never forget that we are a Christian church.”

Cheng was not a member of ITPC, Lee said, but his parents would come to the church to hear preaching. He was attending the reception with his mother, authorities said.

“Dr. Cheng was a loving family man, dedicated doctor and a beloved member of our community, and we send our deepest condolences to all who knew him,” said Don Barnes, Orange County Sheriff-Coroner, in a news release. “There is no doubt that Dr. Cheng’s actions that day saved the lives of many other church members. He is a hero and will be remembered by this community as such.”

ITPC and others are raising money to help provide for the education of Cheng’s two children. More than $100,000 has been raised so far, and the goal is to raise even more as part of the effort, which also involves the Presbyterian Church in Taiwan and some concerned young professionals. 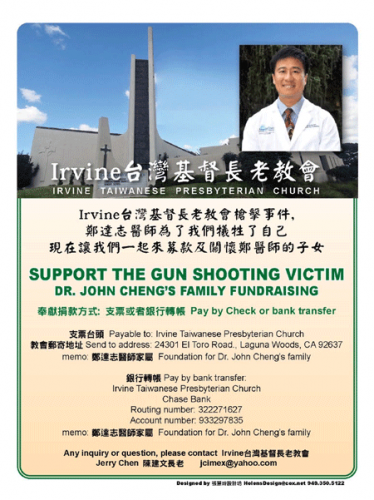 Fundraising is underway to help pay for the education of the children of Dr. John Cheng, a physician who was killed in the shooting. (Flyer courtesy of ITPC)

“ITPC will handle all of the donations in the U.S.A.,” Lee said.  “Everything we raise will go to the children’s educational fund … We are doing this on behalf of Dr. Cheng, so we welcome all the help we can have.”

For ITPC members, the shooting has sparked a mix of emotions, from anger to shock. Lee noted that some who were present during the shooting have been plagued by nightmares and flashbacks.

Presbyterian Disaster Assistance has shared resources and information about providing an initial assistance grant to support emotional and spiritual care, said the Rev. Jim Kirk, PDA’s Associate for (U.S.) Disaster Response. He continues to be in touch with the presbytery and others about denominational support.

Meanwhile, Lee has brought in psychologists to work with church members, and those experiencing the most trauma have been encouraged to take part in further sessions. 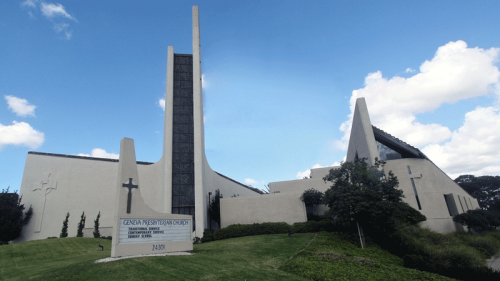 ITPC also plans to do everything it can to help the mother of Cheng, who was already grappling with the recent loss of her husband.

The Rev. Dr. Steven M. Marsh, Geneva Presbyterian’s pastor, has said, “The Geneva Church family will support the ITPC congregation through this traumatic experience. We will listen to this community and follow their lead. The Session and staff is requesting that together, we pray for one another and those in our surrounding communities. We’ve all been affected, and we hold our neighbors at ITPC at the center of our prayers.”

A vigil last week included prayers for the victims and Cheng’s family as well as the entire Taiwanese church and the denomination, said Ralph Su, Associate for Asian Intercultural Congregational Support for Racial Equity & Women’s Intercultural Ministries. There also were prayers on racism and the violence that emanates from it during the vigil, which attracted people from the United States and Taiwan.

Looking to the future, Lee is certain that ITPC will rebound despite the tragic shooting.

The church members “will not just stay where they are in grief,” he said. “I’m going to encourage them (to) continue to move forward,” and find the harmony and community in society.

To contribute to the educational fund for Dr. Cheng’s children, send a check payable to Irvine Taiwanese Presbyterian Church at 24301 El Toro Road, Laguna Woods, CA 92637. See the flyer above for additional information about giving.

Presbyterian Disaster Assistance is able to respond quickly to emergencies thanks to your gifts to One Great Hour of Sharing. It is one of the Compassion, Peace and Justice ministries of the Presbyterian Mission Agency.