The PC(USA) and its predecessor bodies have addressed gun violence through the actions of many General Assemblies in the last fifty years. Beginning in the late 1960’s, in response to the assassinations of public leaders, the General Assembly called for “….control [of] the sale and possession of firearms of all kinds.” Similar resolutions were passed again in 1976, 1988, 1990, 1991, 1996 and 1998.

Each resolution reflected a sense of moral urgency in response to rising gun violence and the cultural trends that contributed to it. These resolutions have called on the church to be involved in education and advocacy at the federal, state, and community level to prevent gun violence. In 1991 and 1996, these resolutions were backed up with strong educational curricula as well as comprehensive strategies for advocacy.

In 2008 the General Assembly recommended that churches should take seriously the pastoral implications of caring for members of our community who have experienced the pain of gun violence, advocate for legislation that would increase the safety and well-being of communities in relation to the presence of guns, and conduct a national study on gun violence. From this recommendation, a gun violence prevention task force of ten people was formed under the auspices of the Advisory Committee on Social Witness Policy.

The task force worked tirelessly over the next two years and produced a comprehensive study of contemporary gun violence in the United States, complete with recommendations for the church as to how to address this critical issue. This study was unanimously approved by the 219th General Assembly.

This policy and study paper was approved by the 219th General Assembly (2010).  It includes not only the policy and supporting material, but also a study guide, wordlist and list of additional resources.

This action of the General Assembly affirms and continues the actions of the 219th General Assembly.  It furthers the church’s witness by encouraging congregations and others with church-related property to consider action to proper signage to prohibit guns on church property.

Webinar Series: “Standing Our Holy Ground: A Year-Long Look at Gun Violence and What the Faith Community Can Do About It”

Standing Our Holy Ground is a year-long webinar series that challenges the faith community to stand up against gun violence, a far-reaching crisis of our day. Touching on a large variety of topics and utilizing those at the forefront of the work and research, this comprehensive webinar series delves deeply into the epidemic of gun violence and explores the ways in which people of faith and the communities to which they belong can respond and act to bring about change.

Each 1-hour webinar is free to view and features knowledgeable and experienced presenters, provides time for questions from viewers and suggests actionable steps to be taken following the webinar. Registration for upcoming webinars and recordings of past webinars are available on the series’ webpage.

This two-sided flyer provides an overview of the schedule for the “Standing Our Holy Ground” webinar series on one side and on the other side lists “Ten Things You Can Do to End Gun Violence.” These are suggestions approved by the 2019 General Assembly (2010) report Gun Violence, Gospel Values.

This resource was produced and has been updated by the Presbyterian Peace Fellowship.  It provides educational resources, online links, recommended reading and documentaries, guidance for small group conversations, pastoral and worship resources and suggestions for action and advocacy.

It includes the following study sessions:

A film by David Barnhart, an award-winning producer, director, and documentary filmmaker. 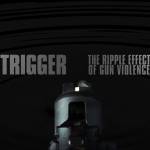 This documentary frames gun violence as both a disaster and a public health issue. It addresses the critical issue of gun violence prevention by moving the conversation away from the polarizing extremes that have long dominated the debate and lifting up the voice and experiences of those who seek common ground and a new way forward. Trigger was produced in part as a response to the 219th General Assembly (2010) resolution Gun Violence, Gospel Values: Mobilizing in Response to God’s Call and to shed light on the growing issue. The documentary and its accompanying resources are the result of a collaborative effort between the Presbyterian Disaster Assistance and Presbyterian Peacemaking Program.

Trigger: The Ripple Effect of Gun Violence is a documentary that frames gun violence as a Disaster and Public Health issue by taking an in depth look at how one shooting impacts individuals, families and communities, while also giving voice to the questions and insights that arise from these conversations. In the documentary, all those scarred by gun violence eventually arrived at the same question: “Why…Why did this happen to us?” After looking at these in depth experiences of gun violence “Trigger turns its attention to the bigger question: “What can we do to prevent gun violence?” 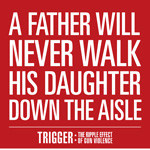 TRIGGER: The Ripple Effect of Gun Violence has been screened across the United States by groups of all sizes. This screening kit is a free resource that offers a step-by-step guide to organizing a local screening event in your community. The screening kit includes: best practices, a sample press release, promotional posters, gun violence statistics, background information on the film, and suggestions for local engagement in gun violence prevention. 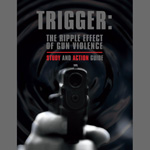 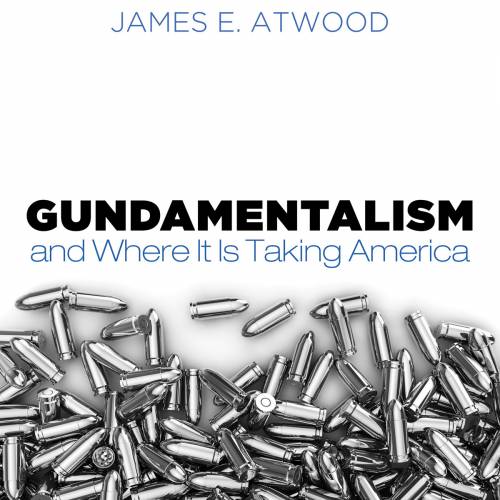 Gundamentalism & Where It Is Taking America
By James E. Atwood

Atwood offers an immensely readable and comprehensive overview of the issue of gun violence in America, with discussion questions following each chapter. While written from a faith perspective, the book is designed for both church groups and a broader audience, including college, law, medical and public health schools; law enforcement agencies; local government and community  groups. 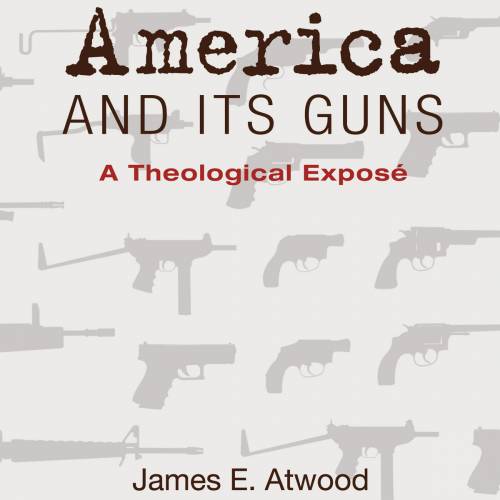 America and Its Guns: A Theological Exposé
By James E. Atwood
Foreword by Walter Brueggemann

Atwood documents how Americans have been deceived into believing that the tools of violence will provide ultimate security, whether they take the form of advanced military technology or a handgun in the bedside stand. He offers a wake-up call to the faith community, which he says is America’s best hope to unmask the extremism of the Gun Empire. This book will appeal primarily to persons of faith because it brings together multiple aspects of the gun death crisis in America –the statistics, the laws, the players, the options— with the underlying spiritual and theological imperatives of what is often considered to be a “hands-off” political issue.

Available at amazon.com in print and Kindle or with the publisher’s group discounts. Call 541-344-1528 or order from wipfandstock.com/ 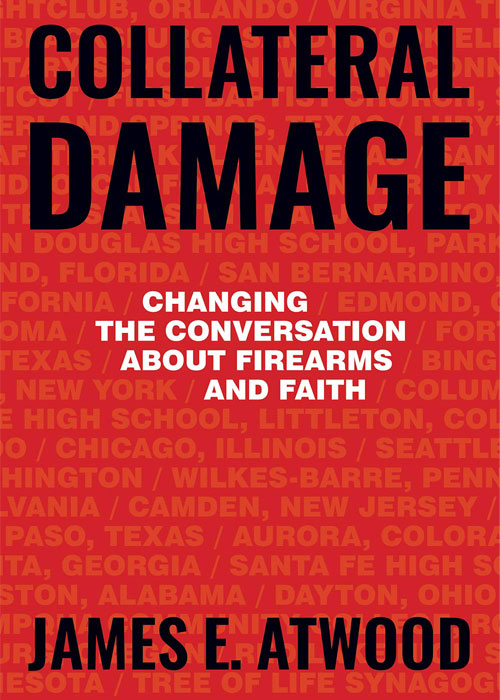 Collateral Damage: Changing the Conversation about Faith and Firearms
By James E. Atwood

Atwood issues an urgent call to action to Christians to work together to stop gun violence. An avid hunter for many years, Atwood enumerates the tragic and far-reaching costs that accrue in a country with more guns than people. Collateral damage includes a generalized fear and loss of trust. Suicides and homicides. Trauma for children in neighborhoods plagued by gun violence and in schools with frequent lockdown drills. A toxic machismo that shapes our boys and men in unhealthy ways. Economic costs that exceed $229 billion per year. Atwood also considers the deeper story of racism, inequality, and mass incarceration in which the conversation about gun violence is lodged. 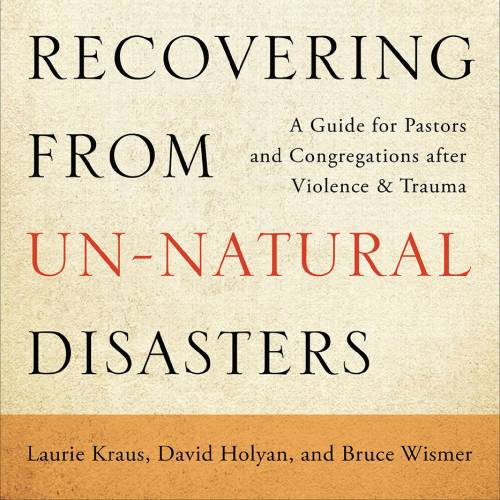 Recovering from Un-Natural Disasters is a must-read handbook for pastors and church leaders of communities who could or perhaps already have experienced an un-natural disaster, such as gun violence, suicides, or sexual abuse. 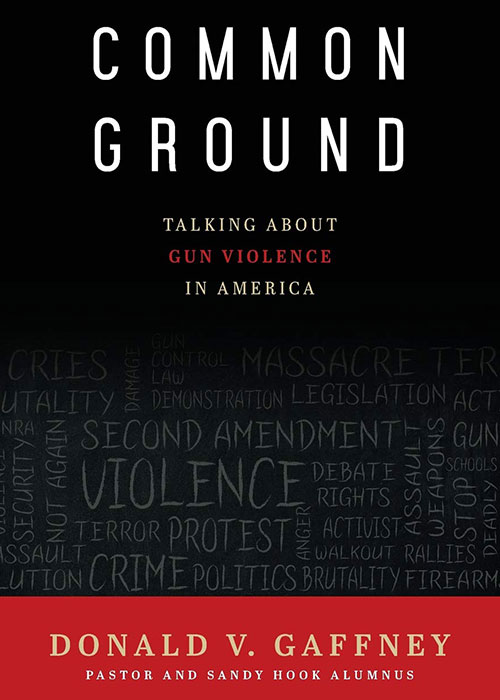 Newtown, Connecticut, native and Disciples of Christ minister Donald V. Gaffney brings a calm and compassionate voice to these complex questions, offering a guide for individuals and groups to reflect on and discuss guns and gun violence. Common Ground explores the place of guns in our individual and national histories, violence in Scripture, the legal issues surrounding gun rights, and ways in which we as moral, life-valuing people can bridge the divide to help solve the problem of gun violence in the United States. To move beyond the talking points and rhetoric dominating gun violence discussions, Gaffney concludes chapters with questions for reflection and discussion to encourage self-examination, exploration, and evaluation of potential solutions to gun violence.

Listed are an assortment of hymns from the Presbyterian Hymnal (1990), Glory to God Hymnal (2013) and from Presbyterian hymn writer Carolyn Winfrey Gillette.

A Litany on the Tragedy of Gun Violence

This litany was written in 2010 to accompany the resources for Martin Luther King Jr. Day, but it is appropriate for any worship service or gathering that draws attention to the escalation of gun violence, public violence and mass shootings in the United States.  It can be used as written or adapted to a particular context.

Martin Luther King Jr. Day is a good Sunday to draw addition to the practices of non-violence and the epidemic of gun violence in the US

Gun Violence Hymn: “God of Mercy You Have Shown Us”

This hymn, set to the tune of BEACH SPRING 8.7.8.7 D (“God Whose Giving Knows No Ending”), was originally written at the request of the PCUSA UN Office for the 2009 International Day of Peace. It is suitable for services that addresses gun violence. (Available in 2 formats)

Gun Violence Hymn: “To A Place of Celebration”

This hymn set to the tune of EBENEZER 8.7.8.7 D (“Why Do Nations Rage Together”) was written by Carolyn Gillette Winfrey in response to the June 12, 2016 shooting at the Pulse nightclub in Orlando, Florida that killed 49 people and wounded 58 It can be used, regrettably, following other instances of mass shooting. (Available in 2 formats) 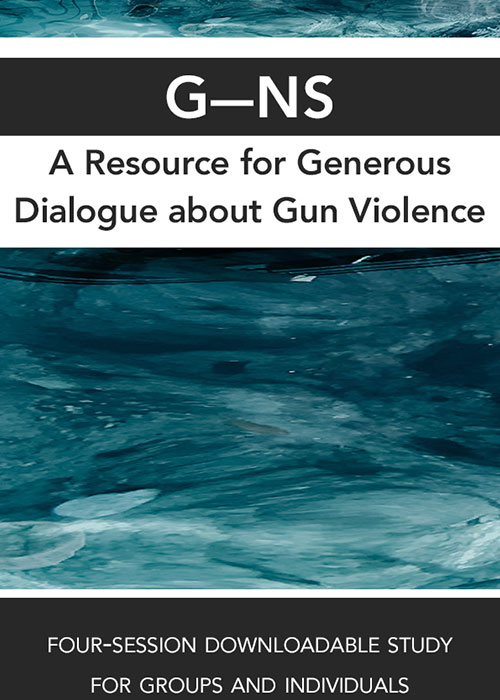 G-NS: A Resource for Generous Dialogue about Gun Violence

This four-session study helps youth and young adults, particularly college students, explore the many facets of the problem of gun violence in our country. Sessions are built around the movements of worship—Gather, Encounter, Respond, and Send. In each session, the topic of gun violence is addressed through the lens of one of these movements of worship. In each session, participants will have time for small group discussion, journaling, large group discussion, learning, and a brief service of worship. Each session includes extensive background for the leader to prepare them for these difficult discussions. Ideal for retreat settings or to be held over the course of four weeks. Download the study or order a copy at the PC(USA) Store.

Youth Conversation Guide – Through a Mirror Dimly
This session outline will help youth talk about, pray about and think about life and faith following a violent situation. 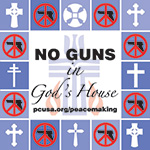 This sign was created for congregations and places of worship to provide a posted notice that guns are not allowed in the building or on the premises.  Two sign designs are available for purchase through Presbyterian Distribution Service. One design has an additional section at the bottom of the sign to add a local ordinance number. The downloadable artwork is also available at no charge.

The 221st General Assembly strongly encouraged sessions, PCUSA entities and community groups to adopt policies and prominently display signage as gun-free zones.  This sign has space at the bottom to add a reference to a local ordinance or state statute where applicable. 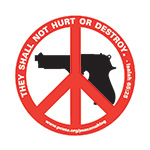 “They Shall Not Hurt or Destroy” Resources

This design was created using the image of a gun with a peace sign superimposed over it.  It cites the passage from Isaiah 65:25 “They shall not hurt or destroy in all my holy mountain.”  It is available as a window cling that can be used on a church, home or car window.  It is also available as a zipper pull to attach to a bag or backpack.  The downloadable artwork is also available. 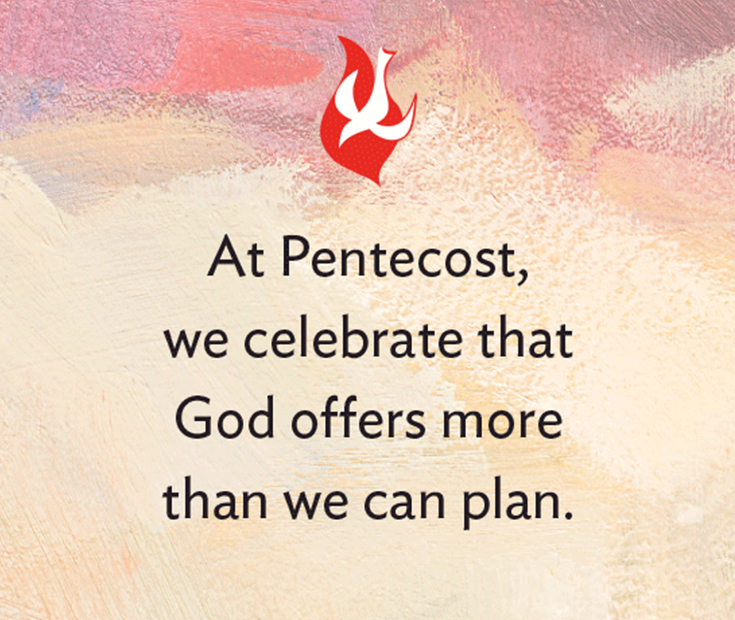