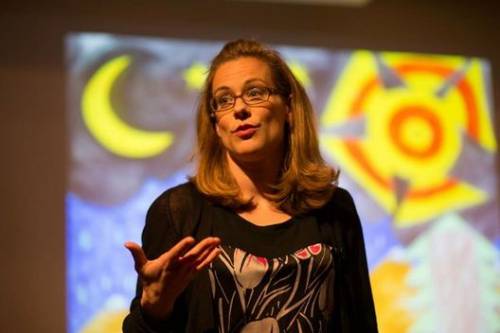 LOUISVILLE – In a world that is less and less biblically literate—and where even people who are already coming to church are by and large unfamiliar with scripture—the Rev. Casey FitzGerald loves to tell the story.

FitzGerald, a biblical storyteller who believes a return to the oral tradition of sharing the stories of God is essential for the formation of disciples, is one of the featured plenary speakers at the upcoming Go Disciple Live “Be the Light” Conference, to be held in St. Pete Beach, Florida, August 8-11.

The Go Disciple Live “Be the Light” Conference, formerly known as the Evangelism and Church Growth Conference, is a vibrant gathering of Presbyterians committed to disciple-making which leads to authentic evangelism, effective church transformation, justice, and church planting through 1001 new worshiping communities.

Although FitzGerald regularly writes about storytelling on her website, Faith and Wonder, and podcasts at Story Divine, she says that while her web presence is designed to teach people tools to use biblical storytelling with their families, in their church context, or as a spiritual discipline, the practice of it is “meant to be witnessed in person.”

“It’s an interaction between the teller and the congregation, or the teller and the audience,” she says. “The experience can’t be captured on video in the same way it can be experienced in person. Since biblical storytelling is another manifestation of the Word becoming flesh, because of its embodiment, it’s significant to participate in it in the flesh.”

FitzGerald’s own conversion to the art occurred four years ago when she was attending a continuing education event and experienced Tracy Radosevic telling a story.

“I watched her, and was so drawn in by her, that I said, ‘I want to do that,’” recalls FitzGerald, who later enrolled in a year-long biblical storytelling certification program though the Academy for Biblical Storytelling. “What was immediately striking to me is that this was the only continuing education event that I ever attended where I could go home and—for no cost and with no involvement of anyone other than myself and scripture—do the very thing that I had just learned. And I did. It’s making me a disciple in a whole new way.”

The certification process also made FitzGerald engage her own context in the church more fully, something that she hopes conference participants will also discover by being introduced to the practice.

“To tell stories here,” she said, referring to Westminster Presbyterian Church, Alexandria, Virginia, where she serves as associate pastor for Children & Families and Young Adults, “started affecting my faith and spiritual life and relationship with scripture. It was like I was hearing the stories for the first time. It has also affected a lot of different parts of the church’s ministry, including the children of the church, who know scripture far better than I did at their age. The key to the church in the future is returning to the text—to the stories—and taking them seriously enough to know that it is a living text, and part of the way that it lives is how it interacts with our own story.”

FitzGerald says that another motivation for her speaking at the conference is that she believes that stories—by heart—should be told by many and varied people.

“It does not belong in the mouths of just preachers,” she says. “The story is not meant just for professional storytellers to tell.”

In addition to sharing her gift of storytelling with those who will be attending the conference, FitzGerald is also looking forward to learning from them.

“I’m excited to speak, but I’m even more excited about the conversations that will happen around the speaking,” she says. “That’s the best part of conferences and social media, that connections are made and then the follow-up collaboration happens. That’s where the magic is.”

The regular registration fee ($320) for the Go Disciple Live “Be the Light” Conference has been extended through June 25. Late registration ($350) will run from June 26 through July 15. Read previous PNS stories on the conference’s other plenary speakers, Mike Breen and Ralph Watkins, and find their bios below: