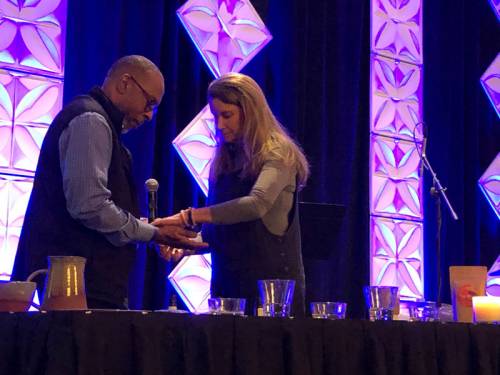 KANSAS CITY, Missouri — As the Rev. Becca Stevens took to the ballroom stage at the Westin Hotel Wednesday, healing oils that would be used by 220 attendees to anoint one other at the 1001 New Worshiping Communities and Vital Congregations national gathering hadn’t been opened yet.

But when the geranium, patchouli and magnolia oils from women in Rwanda were finally opened, a lemony, rose, and musky, earthy fragrance filled the room.

Stevens, the founder of Thistle Farms and Magdalene, a residential community for women who have survived trafficking, prostitution and addiction, used the oils; lyrics from The Hokey Pokey; and Amos 5:24, a passage about justice, to frame her message.

“Justice is at the root of everything we do,” she said. “Worship, which includes creating rituals (anointing each other with oil) is part of our healing.  And then we ask, ‘How can we love the world?’”

As Stevens began describing her passion for justice for the world, the words from Amos 5:24 were on the ballroom screens:

When she began describing being on a mission trip, an image of “her teen self” appeared.

“Perhaps I was doing the Hokey Pokey,” she quipped, admitting that she felt “such compassion for herself, as a nerdy teenager.”

“But what about our broken selves?” she asked.

Then she described the sexual abuse that began to happen to her when she was five — a year after her father died — by the man who replaced him at the Episcopal church that Stevens’ family was a part of.

“My first memory was fellowship hall,” she said. “My last memory, at nine, was a horse stall.”

Stevens said there were lessons learned in “the hard, holy ground” of separation, anxiety and fear. But it also gave her “gifts”: a passion for women survivors of sexual abuse and a love for the church that provided her with scholarships for school.

In 2015, when Stevens saw the shocking images of those who drowned, including a Syrian boy, as women were fleeing Syria for Greece, Thistle Farms asked, “What can we do to help there with our justice enterprises?”

They decided to take life vest blankets to the women that could be weaved into “Welcome Refugees” mats.

When told it couldn’t be done in Greece, her reaction was, “Let’s go.” The more pushback or resistance you get to an idea “is an indication that you should do it,” she said.

Stevens said it took the women at a refugee camp in Ristonia, Greece about 10 minutes to organize. They quickly figured out they wanted buses to go to the market and to get their children to school. Taking their life vest blankets with them, they begin to put woven welcome mats in churches. Within two years they had nine weavers which has since grown to 30.

Knowing the huge connection between human trafficking and children — Stevens said there are 12,000 girls missing from refugee camps — Thistle Farms works to make sure what they are doing is not “just about platitudes.”

As a way of “putting their whole self in and shaking it all about,” she said they work “to engage the marketplace” and “challenge the politics.”

She called it their way “of loving and raising money with justice as their saving grace.”

Stevens’ point: In justice work, the charitable part should engage everybody in ways that they can participate.

“This bazaar way brings us into new space and new ideas, if we allow it,” she said.

Then Stevens paused to begin the anointing ritual. Opening the oils, she allowed their scent to fill the room, before anointing the Rev. Dennis Funderburk. 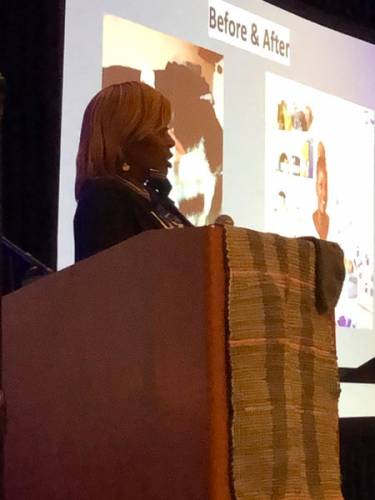 The first person willing to get it started, he then anointed Thistle Farms retail manager Kim Stevens, who had shared her story of being sexually abused when she was four, doing drugs by 11 and graduating to heroin at 17.

It was an account of being in and out of prison, on a path of destruction, before God saw fit to get her into Thistle Farms in two weeks — even though there was a waiting list of 150 women.

It wasn’t easy for Stevens. She relapsed while at Thistle Farms, but eventually graduated.

As she took the oil from the stage to start anointing one side of the ballroom, her words describing how she had a purpose now, because she knew other women would get well, were alive.

“It felt like we were becoming part of each other’s healing stories,” she said. 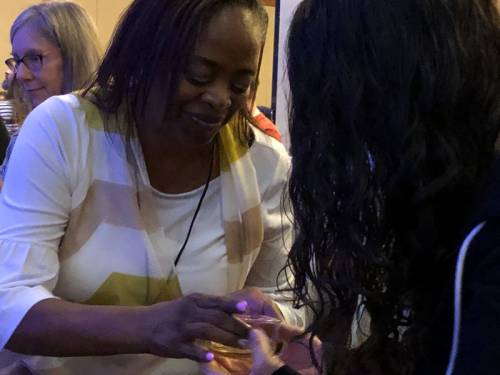 In closing, referencing the Hokey Pokey admonition to “Turn yourself around,” Becca Stevens described a gray period in her life.

In Nebraska to visit  Magdalene Omaha/Thistle Lights, the weather matched her mood. After the visit, heading home and spent, she was traveling with Sophia, who was flying for her first time.

Breaking “every cardinal rule about the armrest,” Sophia’s “head was in my lap,” Stevens said, “when grace broke through.”

From foster homes, Sophia had been abused. In and of prison, she’d experienced the ugliness of racism, but had never seen the top side of clouds.

And on this Sunday night, the moon was out, and the sky’s hues were grey, purple and red.

And then Sophia said this to Stevens: “I never knew there was something beyond the ground.”

“That’s why we help each other, why we share, and why we sell,” she said.  “Because there is something beyond this fragile Earth.”

The 1001/VC gathering, Perspectives: The Church… Then… Now… Beyond wrapped up Wednesday night.  Two post conference events were scheduled for Thursday morning.