…be led forth in peace. (Isaiah 55:12). Support to the Peace & Global Witness Offering.
Make A Donation Click Here >
Home › After a massive earthquake and a tropical storm, Haiti continues to face serious challenges

PDA, World Mission and global partners work together to help the most vulnerable 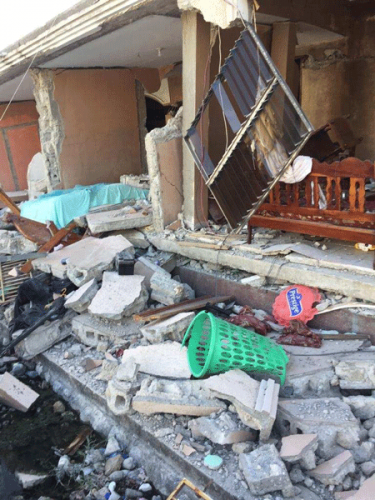 After being rocked by Saturday’s 7.2-magnitude earthquake, Haitians are also dealing with additional miseries, including a tropical storm. (Photo courtesy of Presbyterian Disaster Assistance)

LOUISVILLE — Since the 7.2-magnitude earthquake hit Haiti Saturday, people have been sleeping outside waiting for possible aftershocks. When tropical storm Grace hit Monday, they had yet another horrible choice to make.

“Imagine drenching, pouring water. People under tarps huddled together, holding their babies and screaming ‘Amwey’, which means ‘help,’” said Cindy Corell, mission co-worker who has lived in Haiti since 2013. “Remember that even in regions not devastated by the earthquake, people still had been sleeping outside for fear of aftershocks. With the rain falling, many people chose to go back into their houses or sit in the cold rain with their children.”

According to a fact sheet issued Tuesday by USAID, 1,419 people have died (by Wednesday morning the death toll had been raised to more than 2,000). In addition, more than 6,900 have been injured, 83,300 homes have been destroyed and 2.2 million Haitians have been exposed to violent aftershocks.

Since the pandemic, Corell has been sheltering-in-place in the U.S. but continues to work with partners in Haiti on a daily basis, including Fabienne Jean of FONDAMA, a longtime PC(USA) partner.

FONDAMA is a network of 11 organizations that works all over the country, especially in the south and Grand Anse, the areas most affected by the earthquake, working to provide a rapid response to those who are in the streets and who have multiple needs. 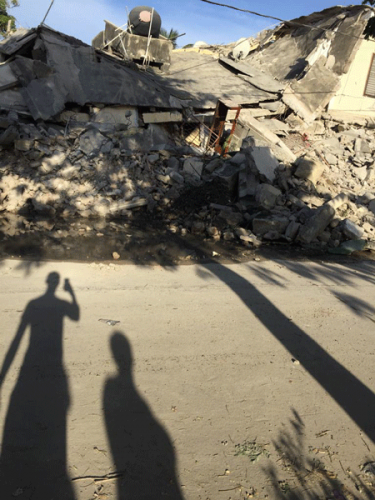 Haitians don’t feel in control of their own lives following the earthquake and tropical storm. Here a pair of residents survey some of the damage in Les Cayes. (Photo by Tijo Conseillant)

Jean told Corell that the Haitian people don’t feel they are in control of anything right now. The tropical storm has pushed people into tight spaces, but they cannot practice prevention because there are no masks and no way to socially distance, so the threat of COVID-19 increases.

Since the earthquake hit, the Rev. Edwin González-Castillo, Presbyterian Disaster Assistance’s associate for Latin America and the Caribbean, has been coordinating with several partners in the area, including David Guervil, consultant for program monitoring in Haiti, on the ground in country working for PDA. Solidarity grants from PDA have already been sent to two partners, FONDAMA (Hands Together Foundation in Haiti) and APPUI AU DÉVELOPPEMENT LOCAL EN HAITI (Local Support and Development in Haiti). Those funds will be used to provide water, food, hygiene kits, blankets and first aid kits.

Guervil, who is from the southern part of the country, where the damage was most severe, has close relatives in the region. Although they lost their homes, they were able to escape severe injuries.

Haitian families are requesting tarpaulins, not tents, because of the threat of violence. Following the 2010 earthquake, many of the most vulnerable were assaulted in tent cities. 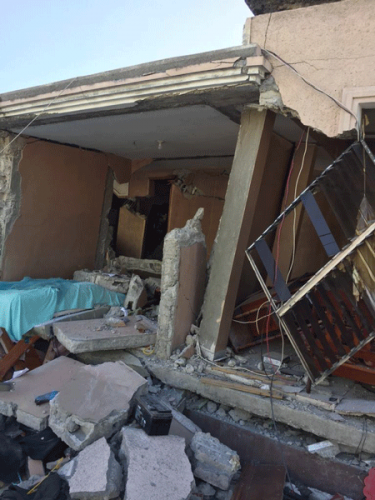 “The needs are beyond imaginable,” said González-Castillo. “Our siblings in Haiti have been facing many difficulties that are made worse when you have a pandemic added to it. From economic crisis, social and political unrest, an earthquake and a tropical storm, the situation in Haiti is devastating. An urgent response is needed, and PDA is committed to provide assistance through our partners in the areas of need. Any donation to contribute to this response is a blessing to our siblings in this country.”

The United Nations World Food Program on Tuesday was planning to send trucks with supplies to Haiti this week, but whether they will reach their final destination is in doubt. Haiti’s current prime minister, Dr. Ariel Henry, who was sworn in on July 20 after the assassination of president Jovenel Moïse on July 7, has been negotiating with Haitian gangs to get humanitarian aid to the most impacted areas. Martissant, south of Port-au-Prince, and Carrefour are bottlenecks that provide a convenient place for gangs to stop traffic, kidnap and steal. Corell said many Haitians are distrustful, wondering what the prime minister had to promise them to get them to cooperate.

On Monday night, Corell received a note from her 20-year-old neighbor in Haiti who is still in school. He plans to join a cadre of young people who want to volunteer in the areas that need the most help. 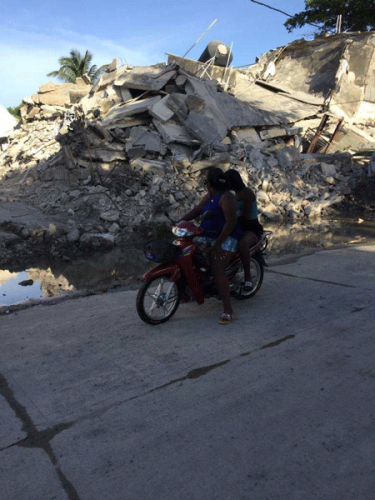 “It is so powerful the way the people of Haiti reach out to help each other,” said Corell. “They will put themselves in harm’s way. They will scrounge in the rubble to pull somebody out they don’t know. They will just show up. After all they’ve been through, time after time after time, they will go out and help their neighbor. They have so much to teach us. It’s just so heartening. There are so many humanitarian challenges in Haiti but the human resources of Haiti, especially its young people, are so strong and so good.”

On Thursday, PDA, World Mission, and Haitian global partners are planning a Facebook Live event updating the situation in Haiti beginning at 11:30 a.m. Eastern Time. The event will be available on the Facebook pages of the PC(USA), PDA, World Mission and here.

Click here to donate to One Great Hour of Sharing to speed Presbyterian Disaster Assistance help to earthquake-stricken Haiti, the poorest nation in the Western Hemisphere.