Building a Life of Faith. Support the Pentecost Offering..
Make A Donation Click Here >
Home › A webinar on the current context of the Palestinian people

Event is scheduled for April 27 and advanced registration is required 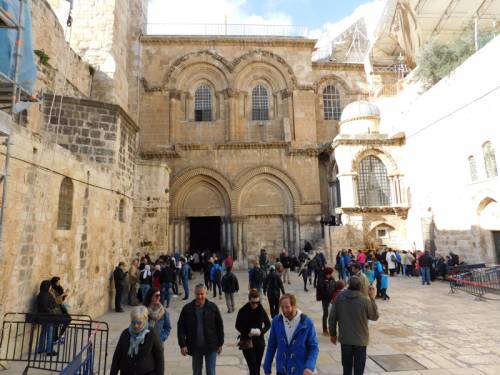 The entrance to the Church of the Holy Sepulchre in Jerusalem. (Photo by Kathy Melvin)

LOUISVILLE ­— A webinar focusing on the current context of the Palestinian people, including disparity in access to COVID-19 vaccines, is scheduled from noon through 1 p.m. Eastern Time on Tuesday, April 27. The event is hosted by Presbyterian World Mission’s Middle East and Europe office and the Office of Public Witness.

The situation in Palestine under the ongoing Israeli occupation of the West Bank, defined as illegal by international law and the Fourth Geneva Convention, shows no signs of improvement and is causing more and more despair among Palestinians, who continue to fear losing more of their land.

The deliberate engineering of space and disparity in allotment of resources causes continued hardship. Those include carefully orchestrated road systems for two different groups of people, threats of annexation of the Jordan Valley and unequal access to COVID-19 vaccinations, all of which are exacerbating the suffering of the Palestinian people in the Occupied Territories.

How do the facts on the ground shape the possibility for a just solution for Israel Palestine? What are the hopes for progress toward peace under a new U.S. presidential administration? In what ways can the international community advocate for just solutions and better humanitarian conditions?

Participants will learn how two social justice and human rights organizations, one Palestinian and one Israeli, have come to define Israel as an apartheid state and how to contribute to the work churches and church partners in this region engage in to promote justice in the region. 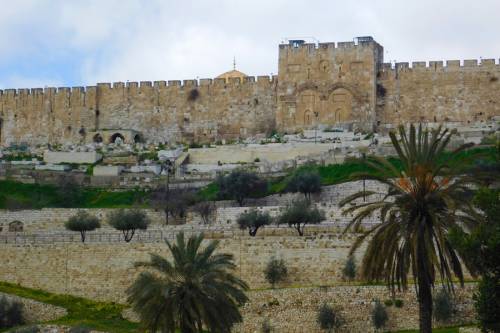 This entry into the Holy City is known as the Eastern Gate, or the Golden Gate. (Photo by Kathy Melvin)

Speakers will include Yasmine Rishmaw, who was born and raised in Bethlehem, Palestine. She is currently an advanced master’s student of cultural anthropology and development studies at KU Leuven, Belgium. She is a member of the steering committee of PYEM and has been actively engaged with the World Student Christian Federation (WCSF) since 2010. From 2012-17, she was the co-moderator of WSCF’s Advocacy and Solidarity Committee. She currently serves on the global executive committee of WSCF representing the Middle East Region.

Rifat Kassis been active in the Palestinian struggle on a number of nonviolent fronts. In 1991 he founded the first and only Palestinian independent child rights NGO, Defense for Children International (DCI). He served as executive director of the East Jerusalem YMCA (2000-2004) and founded the Olive Tree Campaign. In 2005, he ran the World Council of Churches (WCC) Ecumenical Accompaniment Program in Palestine and Israel (EAPPI) and worked as special advisor for the WCC General Secretary on the Middle East. He was the driving force and one of the co-authors of Kairos Palestine document and became the General Coordinator of Kairos Palestine movement as well as the Global Kairos for Justice Coalition.

Hagai El-Ad is executive director of B’Tselem بتسيلم בצלם, The Israeli Information Center for Human Rights in the Occupied Palestinian Territories. Previously he was director of the Association for Civil Rights in Israel (ACRI, 2008–2014) and the Jerusalem Open House for Pride and Tolerance (JOH, 2000–2006). In 2014, he was among Foreign Policy’s “100 Leading Global Thinkers.” In 2016 and again in 2018, he spoke before the United Nations Security Council, calling for international action to end the occupation. He lives in Jerusalem.

The webinar is free but advance Zoom registration is required by clicking here.