Belhar and C67: calls to reconciliation ‘for such a time as this’

By Clifton Kirkpatrick | Professor of World Christianity and Ecumenical Studies and the William A. Benfield Jr. Professor of Evangelism and Global Mission at Louisville Presbyterian Theological Seminary. He also has served as stated clerk of the PC(USA) General Assembly, director of PC(USA) World Mission, president of the World Communion of Reformed Churches, and moderator of the International Accompaniment Group for the Reconciliation of the Reformed Churches in South Africa around the Belhar Confession. This article is adapted from his 2015 Race and Reconciliation curriculum, part of the Being Reformed: Faith Seeking Understanding series published by Congregational Ministries Publishing.

When the 179th General Assembly (1967) convened almost 50 years ago in Portland, Oregon, society was experiencing a time of tumult and massive social change. The Civil Rights Act and the Voting Rights Act had recently been enacted, with churches—especially black churches—leading the call for racial and social justice. Clearly the Presbyterian Church was called upon to act—and it did in a variety of ways, including giving clear expression to our mandate to work for racial justice in the Confession of 1967. 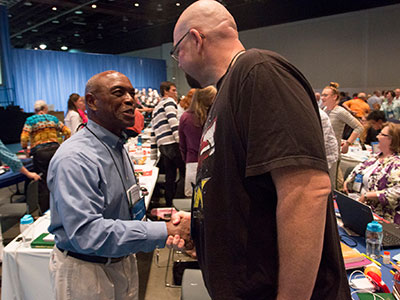 Commissioners at the 221st General Assembly (2014) pass the peace during morning worship. They would later vote to propose the addition of Belhar to the PC(USA) Book of Confessions. (Photo by Michael Whitman)

One of the reasons given for holding our next General Assembly in Portland is the importance of celebrating the 50th anniversary of the adoption of the Confession of 1967 in the city where it was adopted. In the prelude to that General Assembly, an overwhelming number of presbyteries endorsed the confession. Although the confession is almost 50 years old, it continues to capture the imagination of the church. Princeton Theological Seminary and Stony Point Center held commemorations to mark the 15- and 35-year anniversaries, respectively, reminding the church of the confession’s continuing relevance. That will again be a major focus as the Assembly gathers in Portland in 2016.

Coming to this same Assembly will be the Confession of Belhar for formal adoption after its approval by the 221st General Assembly (2014) and the approval of well over the required two-thirds of our presbyteries. Growing out of the witness of the church in South Africa against apartheid, this powerful confession is a call to the church to live our life firmly centered on unity, reconciliation, and justice.

The Confession of 1967 calls on the church to be an advocate for “the abolition of all racial discrimination” in our nation and world, while Belhar is primarily a call to the church to be a living demonstration of that reconciling justice. One confession is primarily focused on the world. The other is focused on the church. Both seek a world and a church free of racism and injustice and shaped by a spirit of unity and reconciliation. We need both!

‘For just such a time as this’

In the book of Esther when the king has threatened to annihilate the Jewish people, we read the riveting account of Mordecai’s admonition to his cousin, Esther. Esther has just been made queen. He tells her, “If you keep silence at such a time as this, relief and deliverance will rise for the Jews from another quarter, but you and your father’s family will perish. Who knows? Perhaps you have come to royal dignity for just such a time as this” (Esther 4:14). As I have read, studied, and taught the Confession of 1967 this past year and as I have been actively engaged with Belhar as co-moderator of the General Assembly Special Committee on the Confession of Belhar, I have come to a growing conviction that the coming of these two confessions to prominence in our church is not just coincidental. It is providential.

These confessions are meant “for just such a time as this.” Over the last few years we have lost hundreds of thousands of members and hundreds of churches who are so deeply alienated from the broader witness of the Presbyterian Church (U.S.A.) that they have felt they must split from other sisters and brothers in our denomination. At the same time, we have failed to make our church a truly inclusive church with a growing diversity of age, race, language, and nationality in our membership. The historic words of Martin Luther King Jr. that Sunday morning at 11:00 is the most segregated hour of the week are as true today as they were 50 years ago.

On a societal level racism and injustice are rampant, and they call out for the prophetic ministry of the church. First Nation peoples still live in dire poverty on reservations. Young African American men are incarcerated disproportionately to their percentage of the population. The legal status of Latinos, both native born and immigrant, is subject to question in virtually every quarter of the nation. “Stop and frisk” and “stand your ground” laws put poor, young, black and brown men at risk. If we didn’t already know how serious racism and injustice are in our society, we’ve gotten a wake-up call from Michael Brown, Eric Garner, Trayvon Martin, and Clementa Pinckney—who have all died needlessly as the result of racially inspired violence.

The concerns that gave rise to the Confession of 1967 in its time and to the Confession of Belhar (in 1986) are very much alive today. The concern to be a people of God reconciled in Christ for the reconciliation of the world is just as relevant today as ever. It is truly a providential coincidence that these confessions are again prominent in the life of our church, for they are surely needed “for just such a time as this.”

At the conclusion of the Preface to the Confession of 1967 we find this statement that sets forth the basic theological framework for this Confession:

The confession’s authors seek to make it clear that God’s reconciliation in Jesus Christ is at the heart of the Reformed tradition in any age and, at the same time, has a particular urgency in the context of the PC(USA) and US society in our time. The biblical inspiration for this theology is nowhere better expressed than in 2 Corinthians 5:19: “In Christ God was reconciling the world to himself, not counting their trespasses against them, and entrusting the message of reconciliation to us.”

The Confession of 1967 moves from this general affirmation about the ministry of reconciliation to the specific callings of overcoming racism; advocating for peace, justice, and freedom in world affairs; committing to the elimination of poverty in a world of abundance; and supporting reconciling relationships between women and men—issues as relevant today as they were in 1967.

The Confession of Belhar

Echoing through the few pages of the Belhar Confession is the wonderful vision of Galatians 3:28: “There is no longer Jew or Greek, there is no longer slave or free, there is no longer male and female; for all of you are one in Christ Jesus.” From the beginning to the end of Belhar are affirmations that we are all part of one human family, that we are called to be one church, and that we are to stand firmly against any injustice that denies these realities.

For those who would criticize Belhar for being too centered on the church and not enough centered on the political order, the authors of this confession would counter that apartheid had its roots in a perverted Reformed theology, so we must begin with ourselves if we are to make a genuine contribution for a world without apartheid. The framers of this confession would also remind us that one of the most important ways in which the church transforms the world, in accord with the reign of God, is by being a living demonstration of what God intends for all humanity. It’s hard for them to imagine a faithful church that is not a multicultural church.

While the Belhar Confession made a huge contribution to the struggle for justice in South Africa, it also has amazing relevance to contexts all over the world, including our own in the United States. The issues dealt with in the Belhar Confession are our issues in the PC(USA) today. Like the church in South Africa we desperately need a new sense of unity, reconciliation, and justice.

Two sides of the same coin

These two confessions truly are two sides of the same coin.

The Confession of 1967 pushes the church out to join God’s action in the world to overcome racism, embrace world peace, eliminate grinding poverty, and seek gender justice. It is an outward focused confession, and the action it stimulated in the PC(USA) was for a new movement into society to be agents of reconciliation in the world.

The Belhar Confession, on the other hand, begins and ends with the church. Its context was very different and not just because of geography. The driving force that led the Dutch Reformed Mission Church to confess was apartheid, and apartheid was in many ways a creation of the church. Belhar had to begin with the church and its theology. Also, in South Africa the divides caused by racism were nowhere more evident than in the church’s life. The authors of Belhar knew that the church had to be “reformed . . . and always reforming” if it was going to make a real witness for justice and against racism in its society. The church also needed to model in its life the unity, reconciliation, and justice that God intended and that those Reformed Christians who gathered in Belhar so strongly desired.

The coming to the forefront of these two confessions at the 222nd General Assembly (2016) in Portland with the 50th anniversary of the Confession of 1967 and the adoption of the Confession of Belhar presents the PC(USA) and our congregations with a significant opportunity for renewal as we engage both our church and the world with the message of reconciliation. Going deeply into these confessions gives us an opportunity to be a church of both the roots and the fruits of our faith—a church clearly grounded in the reconciling love of God and in a Christian community that reflects a passion for unity, reconciliation, and justice, while also being a church engaging the world for these same purposes.

These confessions represent two sides of the same coin, and we dare not try to separate them.