Share God’s love with our neighbors-in-need around the world through One Great Hour of Sharing.
Make A Donation Click Here >
Home › A Presbyterian is praying in the House

The Rev. Margaret Grun Kibben, the new Chaplain of the U.S. House of Representatives, is the 16th Presbyterian and first woman to serve 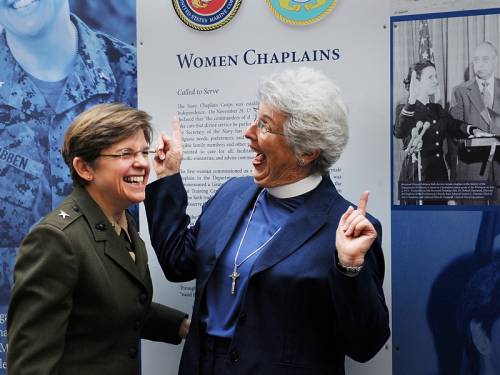 LOUISVILLE — A minister of Word and Sacrament in the Presbytery of Philadelphia, the Rev. Margaret Grun Kibben, a retired Rear Admiral in the U.S. Navy’s Chaplain Corps, has been named Chaplain of the 117th U.S. House of Representatives.

This historic appointment, announced Dec. 31 by House Speaker Nancy Pelosi, makes Kibben the 61st individual, 16th Presbyterian and first woman to serve as congressional chaplain since the U.S. Congress was established in 1789. She succeeds the Rev. Patrick J. Conroy, a Jesuit priest, who retired.

As House Chaplain, Kibben opens the legislative session with prayer each day. She also provides pastoral care to members and congressional staff, coordinates the scheduling of guest chaplains and maintains the Congressional Prayer Room.

Listen to Kibben’s first prayer as Chaplain of the 117th U.S. House of Representatives offered on Jan. 4.

Besides being significant for all women, Kibben’s appointment is being lauded by Presbyterians for returning this important chaplaincy leadership to the Presbyterian Church (U.S.A.) faith tradition after more than half a century.

“Chaplain Kibben comes to this new call at a formidable point in our nation’s history,” said the Rev. (Capt.) Lyman M. Smith, CHC, U.S. Navy, retired, director of the Presbyterian Council of Chaplains and Military Personnel (PCCMP). “Her immediate Presbyterian predecessor, Chaplain Bernard Braskamp, opened the House with a prayer on the day the Civil Rights Act of 1964 was approved. We look forward to Chaplain Kibben serving in a time when similar changes to those needed in Braskamp’s day are in national discussion.” Braskamp served as House Chaplain from 1949 to 1967.

“As a military chaplain, Kibben has learned how to minister to all the souls our Savior brings to her,” Smith said. “She was selected and approved by both the Speaker and the Minority Leader. Her ministry will be to all our elected representatives. We pray the Lord will use her as a true peacemaker and give her great wisdom as a compassionate pastor to those bearing great responsibility for our country’s wellbeing.”

Smith added, “As she cared for soldiers in the midst of battle, may she now be the presence of God in the midst of political battles, which impact the lives of millions.”

“Rear Admiral Margaret Grun Kibbon is a gift to our country and the church. Her dedication to the gospel, wise leadership and pastor’s heart will serve our country well in her new call as Chaplain for the House of Representatives,” said the Rev. Dr. Ray Jones III, director of Theology, Formation & Evangelism for the Presbyterian Mission Agency and its liaison to the Presbyterian Council for Chaplains and Military Personnel.

Kibben has said she recalls feeling called to ministry as early as eighth grade. She pursued her career path to chaplaincy through a long and distinguished career in military service. She entered active duty through the U.S. Navy’s Theological Student Program in 1986 and later served in the top chaplain roles of the U.S. Navy (26th Chief of Chaplains) and the U.S. Marine Corps (18th Chaplain) — the first women to do so. Her 29 years of active duty in the U.S. Navy included serving as senior chaplain during an eight-month tour of duty in Afghanistan. She has also been deployed to Turkey and Norway.

Kibben holds a Bachelor of Arts from Goucher College in Towson, Maryland; Master of Divinity and Doctor of Ministry from Princeton Theological Seminary and a Master’s in National Security and Strategic Studies from the Naval War College in Newport, Rhode Island.

For more than 200 years, each Congress has named a Chaplain of the House, excluding the years preceding the Civil War when local clergy served as volunteer chaplains. At the beginning of each Congress, the chaplain is elected to a two-year term by congressional members. There is no limit to the number of terms a chaplain may serve.

Learn more
Consider supporting the Presbyterian Council for Chaplains and Military Personnel. Through its office in Washington, D.C., the council recruits, endorses and supports chaplains from the PC(USA) and three other Presbyterian denominations.