The General Assembly has offered much language related to militarism over the years. In 2010 it initiated the Peace Discernment Process which produced a number of papers, studies, and resources for congregations throughout the PC(USA). Other General Assemblies in 1980, 1982, 1998, 2004, 2008, 2010, 2012 and 2014 weighed in on issues around militarism in the areas of peacemaking, human rights, drone warfare, divestment related to war and militarism, and ways to support our international partners in the disproportionate ill-effects of militarism on their local communities. In 2010 the policy “Gun Violence, Gospel Values” provided a foundation for our concerns around policing and militarism in the United States.

Militarism is a term that is misunderstood by many, but refers to a “system of beliefs, political priorities and economic investments.” Militarism is often correlated with inordinate expenditures on weapons, undue influence by the defense establishment on setting national priorities, the suppression of human needs, and legitimate protests of evils committed against underserved communities. The domestic impacts of militarism are often overlooked but can be seen in militarized police forces and the demonization of the “other” to justify denial of human rights to repressed peoples and inequality of treatment for marginalized populations.

The Presbyterian Mission Agency is committed to examining and confronting militarism as a part of being a Matthew 25 Church.  We do so through the lens of Christian faith from a variety of intersectional perspectives, including racism, poverty, climate change, and gender oppression. Recognizing the unique resource of specialized ministers serving and having served as chaplains in the uniformed services, the PMA invites their expertise alongside longtime international and domestic partners as we engage in education, advocacy, and partnership within and beyond the PC(USA) to address the dangers and impacts of a militaristic mindset from a Christological perspective.

The “Connecting the Dots” webinar series examines militarism from a variety of intersectional perspectives through the lens of Christian faith. Organized by the PCUSA’s Militarism Working Group. Click here to access recordings of all the webinars.

Resolution on Violence, Religion and Terrorism
This report, approved by the 216th General Assembly (2004), focuses on the role that religion plays in relationship to violence, most specifically the form of violence used to attack important centers and symbols of American power on September 11, 2001. It also examines actions that have been, or can be, mounted to counter such violence and the role religion plays in supporting or challenging those counter terrorist actions.

Gun Violence, Gospel Values: Mobilizing in Response to God’s Call
This policy and study paper was approved by the 219th General Assembly (2010). It includes not only the policy and supporting material, but also a study guide, wordlist and list of additional resources. 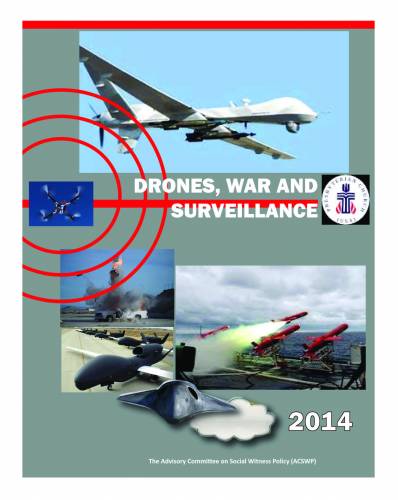 Drones, War & Surveillance
Approved by the 221st General Assembly (2014), this paper analyzes the new faces of war, their applications in counter-terrorism and asymmetrical warfare, and the threats to civil and even religious liberty.

Risking Peace in a Violent World
In this report, approved by the 221st General Assembly (2014), we acknowledge not only a “fearful” but a violent world, even as we hear God’s call in our time to take new risks to challenge our country’s over-reliance on military might and under-investment in “the things that make for peace.” The title of the paper invokes The Confession of 1967’s prophetic phrase: “This search [for peace] requires that the nations pursue fresh and responsible relations across every line of conflict, even at the risk to national security, to reduce areas of strife and to broaden international understanding”

Standing Our Holy Ground Webinar Series: The Ripple Effect of Gun Violence in Urban Contexts
Twenty percent of all firearm homicides in the U.S. occur in the country’s 25 largest cities, even though they contain just over one-tenth of the U.S. population. The Presbyterian Church (USA)-produced documentary Trigger: The Ripple Effect of Gun Violence examines the ripple effect that one shooting has on a survivor, family, community, and society. This episode was broadcast as part of the PC(USA)’s Big Tent Gathering, following a screening of Trigger. The discussion features a panel of Baltimore area residents including clergy, police officers, and activists working to address the gun violence in the city they call home.