A Letter from Shelvis and Nancy Smith-Mather, serving in South Sudan

Individuals: Give online to 052032 for RECONCILE

In 1993, fighting erupted within the small South Sudanese town of Yei (pronounced “Yay”). Machine guns mounted atop land cruisers and AK-47s shouldered by men wearing fatigues launched shells of ammunition into the air. Mothers and grandmothers hurried out of gunfire with babies tied to their backs and cooking pans seated on their heads. They emptied into forests, pushed through branches, waded through streams, moving up, up, up gravel-covered hills and down, down, down shadowed valleys. They assembled at border crossings that were bulging from the influx of refugees. Thousands upon thousands flowed across the border into United Nations-sanctioned areas in Uganda. Once registered, families built semi-permanent homes with white UN tarps. In each of the homes, the tarps stretched across the wooden beams of the ceiling and hung from the wall to the floor. The modest material flapped when winds blew, yet was strong enough to provide some relief from the fierce sun. Family members too weak, too young or too old remained close to the small one-room home as other family members journeyed off daily to bundle firewood and haul cans of water from the bush. One plot of land sat next to another plot of land. Plot by plot they sat; family by family they settled. Among those who settled in the sprawling refugee camps were my future co-workers Margret Sadia and Lucy Awate. 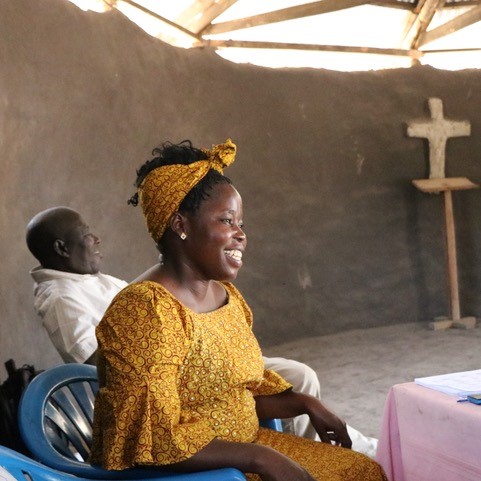 Lucy smiles while listening to stories of triumph in the refugee camps.

Margret and Lucy often tell me (Shelvis) stories of war. Some days the mood is somber, but most days the tone is surprisingly upbeat, rich in laughter and punctuated by high-fives. Their stories usually begin one of three ways: “During the war,” “When the bombing started,” or “Once in the refugee camp.” Today, Margret and Lucy’s story began with the latter.

I often sit quietly during these conversations, awed by their ability to laugh at memories that once were so painful, wondering how they became so resilient.

“Once in the refugee camp, rebel soldiers came by night in a raid,” Margret began. “Two young boys had just been tortured and their ears had been cut off. My neighbor’s brother was taken, and he saw soldiers moving toward my home, so he shouted, ‘They got my brother! Margret, run for your life. Run! Ruuuuuun!’” 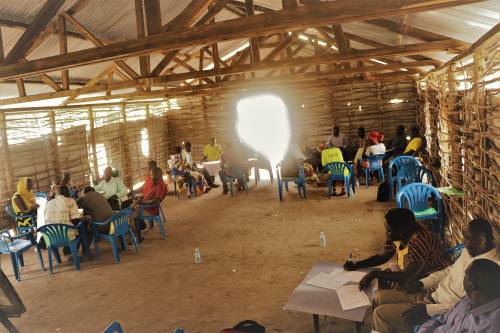 Shelvis and RECONCILE International facilitate a Reconciliation Forum in Rhino Refugee Camp. Margret is the woman writing in the front right corner of the photo.

While the moment was terrifying at the time, today Lucy laughs as she recounts the memory. She emphatically pumps her arms to show how she ran. The corners of her smile touch the tops of her cheeks. Margret and Lucy’s laughter seems to grow as they remember the 25-year-old memory. 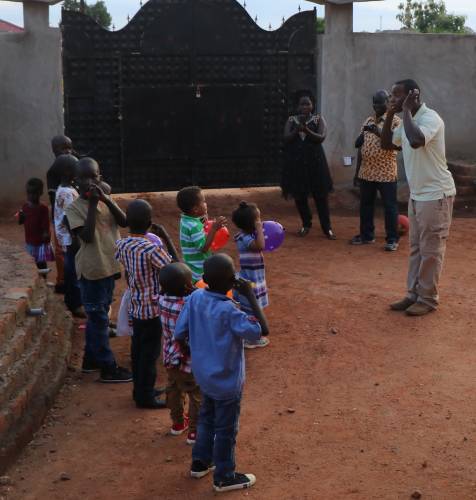 Shelvis plays with children of RECONCILE staff at the Smith-Mather home in Arua, Uganda. Lucy stands in the back and takes a photo with her phone.

They can laugh at such things now, but their laughter comes only after many years of reflection and attention to healing deep emotional wounds. Lucy and Margret achieved some of their healing through the PC(USA)’s longtime South Sudanese partner, RECONCILE International. They both attended the RECONCILE Peace Institute (RPI) and completed the Community-Based Trauma Healing certificate program. Margret went on to become a prominent advocate against human rights violations in Yei. She was later elected chairperson of the RPI alumni chapter. Lucy has worked tirelessly counseling survivors of violence, as well as those responsible for war crimes. She was hired by RECONCILE years later and is the first RPI graduate to have become an RPI lecturer. Both women are committed to helping South Sudanese refugees address the trauma of war and are courageous beyond imagination. They have grappled with their traumatic pasts and are committed to helping others do the same. They are wounded healers.

I have been blessed to work with Margret and Lucy for several years, but I am especially honored to have had the opportunity to work alongside them in Africa’s largest refugee camps last year. With a team of RPI alumni, RECONCILE staff and partner organizations, we implement trauma healing activities within the same areas Margret and Lucy fled years ago. This year, RECONCILE seeks to expand its impact through the PC(USA)’s South Sudan Education and Peace Building Project’s efforts.

Thank you for your support of our family that allows us to participate in these ministries and also provides us opportunities to build friendships with incredible survivors of war like Lucy and Margret. We feel humbled to be serving alongside South Sudanese both in the refugee camps in Uganda and in South Sudan. Please prayerfully consider continuing to financially partner with us in these mutually encouraging and healing ministries.