Individuals: Give online to 052032 for RECONCILE

When our hands met, a strange rush of fear and awe shot up my arm, flooding my heart. I smiled, and said something like “Nice to meet you. Thank you for coming and sharing.”

His name was Celestine, and he spoke on the panel of guests. The panelists were all members of “the Light Group,” a ministry of a local Rwandan congregation. There are several similar groups consisting of survivors and perpetrators of the 1994 genocide in Rwanda that have been formed across the nation. Their pastor, Rev. Jerome Bizimana, brought them to share their experiences with our gathering of PC(USA) mission co-workers. 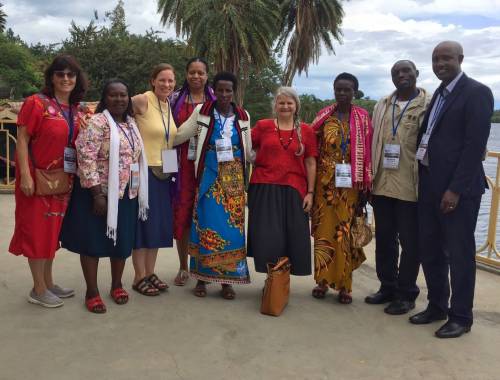 A woman named Anastasie spoke first. “It was really very hard to get the news that someone who killed your children will be back in your community and you will live together,” she said, referencing the time when those convicted of torturing and massacring almost a million citizens were scheduled to be released back into their communities.

“When the former perpetrators came back to the community, Pastor Jerome was very active and held workshops, and the survivors realized they should forgive. If we do not forgive, maybe it will make a barrier between us and God, who has forgiven us. That is when we started the Light Group, a group of reconciliation,” Anastasie recounted.

She explained that the group has about 50 members, and she said: “One step we made was to go visit each other’s houses. Me, as a survivor of genocide, going to the house of someone who killed my loved ones. He brings food, and we shared food and drinks. It was God’s miracle.”

Anastasie went on to talk about co-panelist Celestine: “He participated actively in killing my family and now we are sitting together. When I have a party, he comes and we share.” In her final remarks, she concluded, “Today I am a widow, but a widow who praises the Lord.”

She sat down, and Celestine got up and spoke. “I want to share with you the sad stories that happened in this country and I participated in them. . . . I took part in the genocide. I have accepted it and it happened openly.”

Like every other missionary sitting in the room, I felt my heart pounding as he spoke.

“When I was in jail,” he continued, “we received many evangelists and preachers. They talked about God, and when you talk about God, you feel a peace in your heart. When we were in jail, because of the pastors, we prayed a lot.”

He went on: “Because of what happened, we thought, ‘If we don’t die in the jail and we get out, we will live in the forest with the animals, because we do not feel like human beings anymore.’

“We were told that, if we confess, we do not hide, we will be forgiven, and go back to the community. It was good news, and we completely confessed our sins. We asked God to forgive us for what we have done. We asked forgiveness from all Rwandans . . . . When we got out of jail and into the community, we went to church, but we were still afraid. Inside our hearts we had a big fear: ‘How will we go and relate to other people, especially the victims of genocide?’ The word of God was very powerful, but we were afraid.”

Celestine then admitted that the Light Group’s journey of bringing the survivors and perpetrators together was not easy. He explained: “We met together and shared our experiences. It was a long journey from 2009 up to today.”

As an example of the reconciliation that the group facilitated, he said: “At this time there are intermarriages; even my wife is a survivor from genocide. This happened because of the power of God. Until I die, I will always keep asking God to forgive me.”

The third person who spoke brought a different perspective. “I lost my four children and a baby of 2 months,” she shared. “The baby was thrown in a hole. That was the death of that baby,” she choked through tears. Leaning on the interpreter for support, she added: “It is a process. I am not healed, but I am in the process of healing. I am working together with the Light Group, together with pastor Jerome. In April, when it is genocide commemoration time, everything comes back and, sometimes when I share, I become traumatized again.” 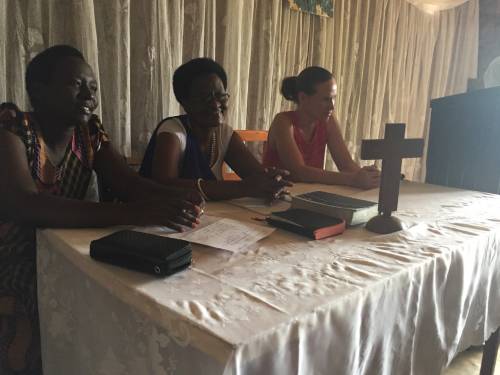 The third testimony gave a crucial piece of the picture, as it spoke to the depth of the difficulty of reconciliation, and yet my mind remained captivated by the first two testimonies. The image of a perpetrator and victim sitting together and the testimony of intermarriage between those two categories felt surreal. Is such forgiveness truly possible? In that moment, in that conference room, I was reminded just how radical the Christian faith is, how incredible the call to forgive, how shallow my own faith when compared to those who exemplify the true “otherness” of following Christ.

I reached my hand toward Celestine, and he gave me a big smile and shook my hand joyfully. I then felt the need to take a photo with Anastasia and Celestine to mark that moment in my spiritual journey. I will never forget the example of the Light Group; it will continue to challenge me for the rest of my life. It speaks powerfully to every context in which there is division, from the current divisiveness of the American landscape to the escalating war happening in South Sudan. The panelists bared their souls, opened their hearts, and shared their lives together in ways that I have never before seen. Their practices of love, forgiveness and faithfulness reveal that the impossible is possible. If they can do it, why can’t we? If God is using them to bring reconciliation within their community, God can use us to bring it in our community. They chose to make a difference. Are we willing?