A letter from Nancy Smith-Mather in the U.S., from serving in South Sudan

The words on the screen of my phone knocked the breath out of me. The security update from my South Sudanese hometown stated: “…an expatriate doctor working for a church-based mission in Yei was shot several times on the night of May 15th. She is awaiting air evacuation… The shooting occurred when the doctor was driving with a sick patient to a clinic near the Yei-Maridi Road.” I gasped in horror.

I knew the road; it is the one we live on. I knew the hospital; it is the one where our son was born. And I knew I would know the doctor, but the email did not say her name. My mind quickly ran through the short list of expatriate women physicians in our town, trying to figure out who may have been in that car.

Sitting in a U.S. hospital lobby, waiting for my antenatal appointment, I tried to pray. The tears choked my crying out to God for help, for healing, for life. I was in a room filled with pregnant women; I really didn’t feel uncomfortable crying in their presence.

When Shelvis picked me up, he already knew the doctor’s name, Sister Veronika. She was shot by a soldier. A missionary, a nun, a medical doctor, a beloved member of the Yei community, shot by a government soldier. Christ, have mercy.

If headed to Nairobi, Kenya, for surgery, I believed she would survive the incident, but what a tragedy. Sister Veronika, from Slovakia, headed the St. Bakhita Medical Center, a ministry of Christ the King Catholic Church, the largest church in our town. We collaborate with Christ the King in our ministry at RECONCILE. Shelvis and Jordan visited Sr. Veronika right before we left on our recent trip to the U.S., two weeks before receiving this tragic news.

If a patient’s care requires services St. Bakhita is not equipped to provide, the patient may be taken to His House of Hope Hospital. The night Sr. Veronika was shot she risked the insecurity of Yei roads at night to get a mother life-saving care. 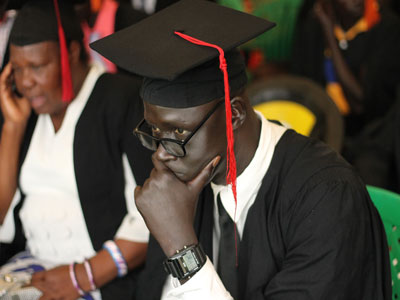 Major Machar graduated from RPI, 2016, determined to transform the army

As I sat in the sadness of it all, I just couldn’t believe it was a soldier. He must have been drunk to do such a thing, I reasoned. Then my mind traveled to a recent conversation with a RECONCILE Peace Institute graduate preparing to return to army barracks. “There is much work to be done,” said Major Machar, “civilians are afraid of soldiers—that needs to change.” 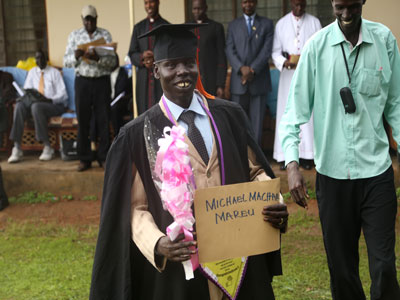 One afternoon, as we sat together at RECONCILE’s training center, Rev. Michael lamented the problem of alcoholism among soldiers. He pointed to the many years of war and soldiers’ traumatization to explain the reason for the addiction. Then he shared this story:

“I have been in the military for a long time. I joined the military in 1990 when I was 13 years old, as a child soldier. And I struggled until the Lord called me to be a priest in 2007. When my life changed, I had a commander who was a major in the military, and he was a drunkard, and people were ignoring him.” During that time Rev. Michael had the task of distributing the soldiers’ salaries. Without telling the commander, he put a small portion of the money in the major’s pocket and sent the rest to the drunk man’s wife. With the small amount in his pocket, the commander thought he was paid in full–until he went to visit his home. There he had a misunderstanding with his wife. “I have not sent you anything,” said the major.

And his wife responded, “Look, I have bought five cows, the children are in school, and I have built the house from the money you have sent.”

Upon returning to his barracks, the major asked Rev. Michael how the money reached his wife. Rev. Michael explained his actions by saying, “I honored you because you are our leader…” After that conversation, “the man changed and became a well-respected leader.” Rev. Michael, the army chaplain, concluded his story with these words: “We will change our leaders by our example.”

Sister Veronika was wounded Sunday night, evacuated on Monday, and Friday morning we received word that she had died. Christ the King’s church bells rang out, announcing her death, and the congregation gathered together to mourn and pray. Many angry people sat in the pews, and yet the Catholic bishop strongly reminded them that the church is called to show a different response, “not revenge, but forgiveness.” Christ, have mercy. 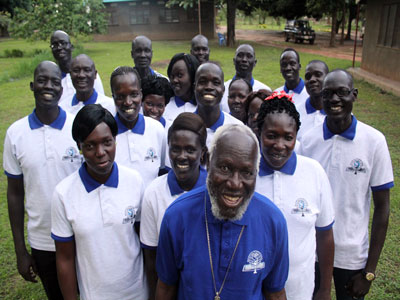 When her body was returned to Yei for burial, mourning South Sudanese men, women and children lined the road from the airport to the cemetery. Bishop Emeritus Paride Taban, an internationally renowned South Sudanese peacebuilder, responded with these words: “She is like a martyr, and they say the blood of the martyrs is the seed of love, the seed of Christians. This blood will bring more seeds of love, seeds of forgiveness, and seeds of repentance. I think that is why we see that in Yei everybody is calm.”

While Major Machar and Rev. Michael are changing the mind-set of soldiers, I found Sr. Veronika’s life and death shifting my own thoughts. Bishop Taban reminded me that even through suffering and death, love, mercy and reconciliation can come. I thank God for Sr. Veronika’s life, a life well lived; a servant of Christ, willing to lay down her life for a friend. The Apostle Peter rejoiced that he was considered worthy of suffering for Christ; now I find myself convicted, struggling with my desire to seek the comfortable, to move away from suffering, even redemptive suffering. Christ, have mercy.

Thank you for supporting our family and the ministries of peacebuilding, trauma recovery, and education we serve in South Sudan. Thank you for your prayers, for your encouragement, and for sharing in the hope that comes from faith.