Sharon is periodically in the United States and available to speak to congregations as her schedule permits. Email her to extend an invitation to visit your congregation or organization.

Lynn and Sharon serve together as the point persons for global partners in Sudan, Ethiopia, and South Sudan, US constituents, mission co-workers, Presbyterian World Mission and Presbyterian Mission Agency staff. Sharon is the primary lead for Ethiopia, and Lynn is the primary lead for Sudan and they are both deeply engaged in South Sudan. They work with the three Critical Global Initiatives (CGIs) addressing the root causes of poverty particularly as they affect women and children, sharing the good news of the Gospel, and engaging in ministries of reconciliation amidst cultures of violence.

Country Profile: In early 2011 the people of South Sudan voted to separate from the rest of Sudan and form an independent country. The referendum was part of a 2005 peace accord that ended decades of civil war between rebels in the South and government forces from the North. However, just two years later the country was engulfed by fighting when president Salva Kiir accused vice-president Riek Machar of attempting a failed coup. Government and rebels agreed to attend peace talks in Ethiopia in 2014, and a deal was finally signed under threat of UN sanctions against both sides in August 2015. An ongoing and increasingly brutal new wave of violence broke out in July of 2016 and has caused widespread famine. The conflict has displaced more than three million people.

They met in Juba, the city that now serves as South Sudan’s capital, in 1980. Lynn was on a short-term mission assignment when he met Sharon, the daughter of former PC(USA) mission co-workers Robb and Megs McLaughlin.

Early in their marriage, Lynn and Sharon sensed a call to mission. They served in Tanzania from 1988 to 1994 with Eastern Mennonite Missions.  Lynn was a construction coordinator and Sharon served in women’s ministry. “It wasn’t until the summer of 2013 that we felt God leading us back into some kind of mission work,” Sharon says.

Immediately prior to her current mission appointment, Sharon worked in food services with East Holmes Local Schools in Berlin, Ohio, for 17 years.  She is a graduate of Hesston College in Hesston, Kansas.

Lynn spent nearly 18 years in the trucking industry. His experience includes 13 years as an independent contractor for Admiral Merchants Motor Freight in Minneapolis. He completed a course of study at the Standard Technical Institute of Motorcycle Technology in Kansas City, Kansas.

“We had both lived in the area before and when this possibility (for service in South Sudan) came up, it felt like God was leading us back,” Sharon says.

South Sudan has multiple and diverse needs so a variety of skills are required to help rebuild it. Sharon and Lynn are blessed to work with people in South Sudan who have an assortment of talents and abilities.  They say 1 Peter 4:10 helps them appreciate the gifts of every person. The verse says: “Like good stewards of the manifold grace of God, serve one another with whatever gift each of you has received.”

“This means a lot to us because we all come with different gifts, abilities, and education and we all are needed,” Lynn says. “We pray that this helps us to not judge others because of their differences but rather to welcome them.”

Lynn and Sharon have been in Juba, South Sudan for two years working primarily with the South Sudan Education and Peacebuilding Project and moving into the Regional Liaison position felt very natural to them both. With Sharon having grown up in Ethiopia there was already a connection and heart for that country.  For South Sudan, this meant taking a slightly different role in working towards peace and being an encouragement for the people of this country but it felt right since they have already established relationships with so many people.

The Kandels are members of Martins Creek Mennonite Church in Millersburg, Ohio.

Watch a video of Sharon Kandel 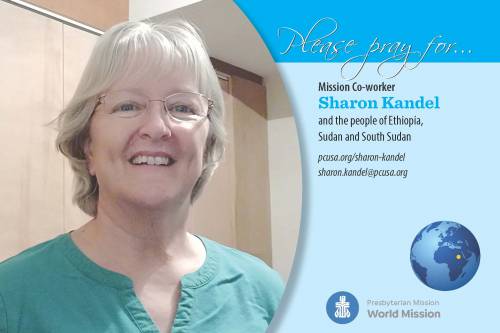 Use this card as you pray for mission co-worker Sharon Kandel. This card includes a photo of her and a description of her ministry in…

Give in honor of the ministry of Sharon Kandel