…be led forth in peace. (Isaiah 55:12). Support to the Peace & Global Witness Offering.
Make A Donation Click Here >
Home › What We Do › Where We Work › Co-workers › When God Changes Our (Flight) Plans

A letter from Lynn and Sharon Kandel, serving in Ethiopia, Sudan and South Sudan

Individuals: Give to 200524 for Lynn and Sharon Kandel’s sending and support

Have you ever made careful plans for a trip and then had them fall apart? I feel like that is the world I live in every day, and yet I am learning from it.

Towards the end of May, we had a co-worker come to South Sudan for a 10-day visit. One of the main reasons for her coming was to go to the village of Pochalla to see the Women’s Agriculture Project that Presbyterian Women are funding. This is a great project that is teaching the women how to farm in effective ways and then provide food for their families and the community. This is also an income-generating project, as some of the crops will be sold and the hope is to buy sewing machines and more seed and to produce more income-generating items to help the families buy the things they cannot grow.

So, how does a trip like that fall apart? It started off so well, with contacting Missionary Aviation Fellowship (MAF) about chartering a plane to go to this village, since there are no commercial flights. And while the UN does fly there and allows people on its planes as space permits, it is expensive. MAF had the perfect solution, with a plane that could take three passengers, which is all we needed, and the price was right. The plan was to fly in on a Friday and then be picked up the following Tuesday. Sounds perfect, right? 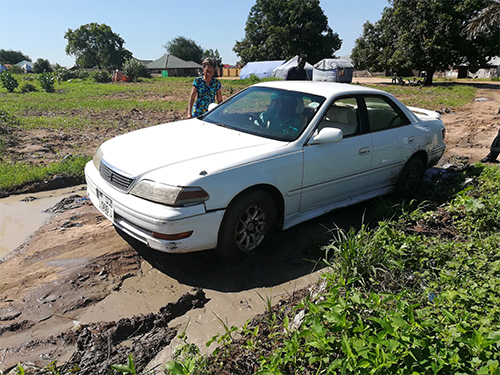 Getting stuck in the mud with Leisa Wagstaff on the way to visit a school in Juba. Good thing we had an extra day!

Well, on the Wednesday before the flight, late in the day, we were contacted by MAF and asked for the JVMM permit. The what permit??? We had never heard of it before, nor been asked to get it in the past. There was no time to get it before the flight on Friday (though we tried!), so we changed the flight to the following Tuesday with pickup on Thursday, and MAF said that would be no problem. We were able to use this time to get the required JVMM permit.

Yet, Monday we were told the plane had to go to Uganda for repairs, so there would be no flight! After much talking with MAF, we finally got the flight set for leaving Friday (a week later than first planned) and returning on Monday, which meant our co-worker had to change her return home flights, but it was going to work.

The day before takeoff, we were told we would need to get a weather report from Pochalla, and someone from there would need to check out the airstrip. Now, would you trust me to go look at the airstrip and say if it is okay? This is a place with no phone service and only intermittent internet service, so how were we supposed to do these things? We would have to go on this flight having faith that it would be okay. 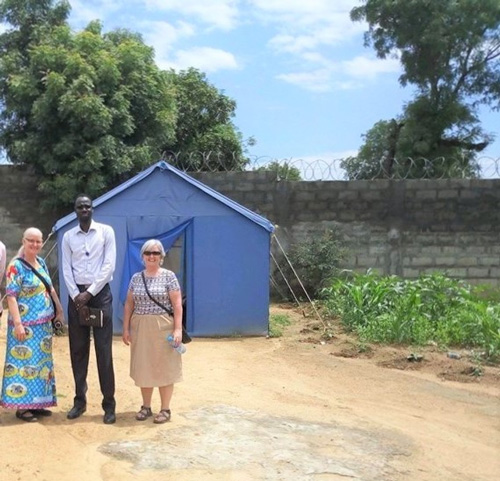 Using the extra time in May to look at some Presbyterian Relief and Development (PRDA) property. Christy Boyd, Rev. Tut Mai and Sharon Kandel.

Now, remember, this flight had been changed and put off for a week. We had to rearrange the meeting schedule for our guest to work with changing travel plans. (On a positive note, the changes allowed her time to visit more one-on-one with the people in Juba and to get some great interviews.) The day before the plane went to Pochalla, we actually got an email from Pochalla saying that a community member needed a ride back on the plane, if that would be okay. This man had been traveling in a vehicle not far from Pochalla with a police officer in the car, when they were stopped by robbers. When the robbers saw the police officer, they shot into the car and ran. Two bullets struck the man, one in the hand and the other in the mouth, knocking out many teeth and injuring his eye.

Why were our plans changed? I believe that God was providing for someone whose needs were far greater than our need to get to Pochalla in our timing. The man was brought to Juba and then taken on to Kenya for medical care. What if we had just given up on the trip? Instead, we all tried to be patient (okay, most were more patient than I was!), to go with the flow and wait on God’s timing.

We do not always get to see the results of changing plans or of God’s timing, but this time we did, and I was reminded that it is best to be still and listen to God in all things, even a trip to Pochalla that seemed so straightforward but proved to be far from it.

Thank you for your prayers and financial support. Without those things, we could not be here, and I could not be learning so many new things. Your prayers mean so much, not only to us, but also to our African partners. Thank you, too, for your emails — they really do encourage us and help us to know what you would like to hear about in our letters.