Support disaster response this hurricane season, GIVE NOW
Make A Donation Click Here >
Home › What We Do › Where We Work › Co-workers › A Visit to Bor

A letter from Lynn and Sharon Kandel serving in South Sudan

Individuals: Give to 200524 for Lynn and Sharon Kandel’s sending and support

Once again I sit down to write and I am not sure where to begin, so I think I will start with the latest news first. The offices of the Presbyterian Church of South Sudan are moving! They have been using one room, yes, one room for four people to work in, and this room often does not have electricity—so no fan and no air-conditioning. A local Presbyterian congregation here in Juba has lent them this room. The church has land in another part of Juba and has just received some money to put up two pre-fab buildings that will have both air-conditioning and more space. I will admit that I had not been excited about working in the small room with three other people in 95-100-degree weather, so this is a plus. There is a downside in that this area is not as easy to get to, but there is a large congregation there and I understand the land was given to the church. 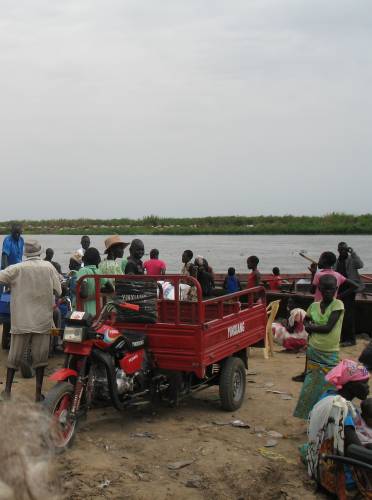 People moving back to Bor.

I have sort of started working with the treasurer, Peter Shabak, on the reporting of money received and spent. This is a slow process as we have to keep after the different departments to get reports in and then a lot of the time people are gone from Juba to see family. Peter has heard about my father, so he always calls me “Nya Dhuoryoam” (daughter of Dhuoryoam, my father’s Nuer name), which makes me feel right at home.  We have lots of laughter in the office as I am being corrected on my Arabic or teased about my pronunciation :-).

Lynn has been spending time talking to other organizations about where they get their supplies for building and how they transport it. Since it is the rainy season, he has not been able to do any actual building, but he has spent time doing plans and talking with people about what they can expect and what they can be doing now to get ready. The other part of Lynn’s job is helping partner organizations with reporting on finances, and he is just now starting to take over this work from a mission co-worker.

With all of that we are also still having a language helper come once a week and would like to find someone else for two more days a week.

Our former language helper came to visit us the other day, and it was wonderful to talk with him again.  While we had a wonderful visit, he also told us some things that are happening here that have him rather discouraged. He works for the Ministry of Education and said that while they do get paid, it is often 45-50 days late. The South Sudanese pound is being devalued daily, prices of goods are going up, and people are having trouble buying basic supplies. The comment was made that until the leaders have a heart for the people there will likely be no positive changes.  This along with the continued war going on in the north makes it a struggle for people to be positive.

Please keep the people of South Sudan in your prayers.

In March we took a trip to Nairobi for a week’s break that ended up being three weeks with a two-night stay in the hospital for Lynn. He had a kidney stone that took 13 days to pass, and he ended up dehydrated so was in the hospital to get fluids and make sure nothing else was wrong.  We are so thankful for all of you who prayed for us during that time.  God is good! At the same time Lynn was dealing with his kidney stone the general secretary of the church here also had a kidney stone! Not the way you want to bond with someone :-). 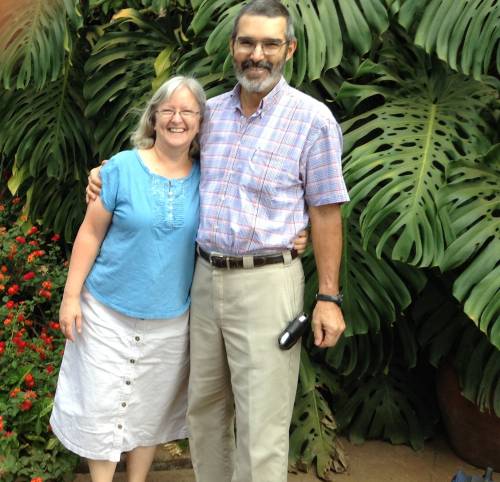 Fully recovered and returning to Juba!

I  had the opportunity to go to Bor with Nancy McGaughey, a Presbyterian mission co-worker and one of our colleagues. She works with clinics outside of Juba, delivering medicines and other supplies. It was good to be able to get out of the city and see what is happening in smaller towns and villages and to see the efforts that the people are making to rebuild their lives. We saw people who had fled Bor during the conflict in December of 2013 now feeling it is safe to return and move on with their lives. There is still uncertainty and fear, but people are trying to move forward. While there I told people about the school buildings that we are hoping to build, and they were happy to know that education is a priority—and of course wanted to know when we would build in their area.

Thank you for all the birthday greetings, Mother’s Day cards and emails you have sent us—it means so much to know that we are in your thoughts and prayers as you are in ours. Thank you for the financial gifts that you continue to give! Recently Presbyterian World Mission has announced a significant funding shortfall, enough so that several mission co-workers have been recalled. We are so thankful for those who are already giving and would love to have others join us and World Mission in sharing the love of God with others around the world.