A letter from Lynn and Sharon Kandel serving in South Sudan

Individuals:Give to 200524 for Lynn and Sharon Kandel’s sending and support

Life has its up and downs, its fast pace and its slow pace, its good times and its bad times. It is amazing to me how we can experience all of that in one day! I must say life in South Sudan is never truly boring.

We arrived back in Juba after a wonderful three weeks in Kenya. It was three weeks of rest, cool weather, and catching up with friends from 25 years ago. Lots of laughter and playing Scrabble.

When we returned to Juba it was to hit the ground running. We came back to the Presbyterian Church offices only partially staffed, so Sharon picked up a little bit of the banking work until Rev. Peter Shabak, the General Treasurer, returned in February. When Peter returned it was time to figure out the Church’s banking situation and after a week of numerous (and I do mean numerous!) trips to the bank, many conversations with the manager, lists being made to make sure we understood everything, and many cups of tea at the bank (yes, they serve us tea, coffee, water or hot chocolate while we wait) the church finally has a new account and a great relationship with the manager! 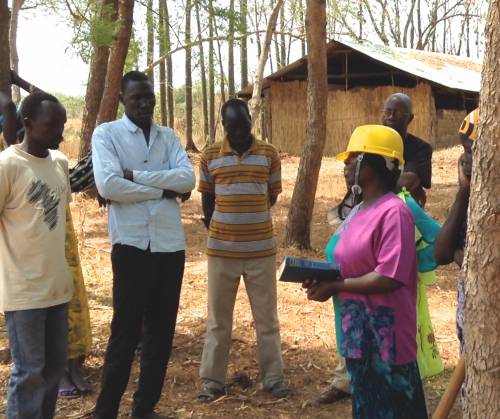 Rev. Paska leading the groundbreaking ceremony for the school in Pochalla

Lynn has been very busy working on how to get the building materials to the site in the village of Pochalla. He has been able to hire a new contractor for the site. This is a young man who worked on the previous site at Akatgol and who has shown some real initiative in getting work done. After getting several bids for the hauling of the supplies, the transporter with experience and the best time schedule for getting the supplies to Pochalla was chosen. Pochalla is accessible by road for only about three months out of the year, December–March, so there has been a sense of urgency to get these supplies there. Once the building supplies are there the building can happen even during the rains. Since I wrote the rough draft for this letter we have had some progress with this building site. Lynn went to Pochalla on March 1 so he could be there when the truck arrived with all the materials and the contractor and mason. The truck left the same day as Lynn but arrived 10 days later. There were four flat tires and a delay as some of the people on the truck were robbed of cell phones and money, but no one was hurt—THANK YOU, LORD!  We could write a book about this building process in Pochalla. 🙂

The South Sudan Education and Peace Building Project has four young men at the Teacher Training College in Yei, South Sudan, who are all from the Pochalla area. These young men will graduate in December of 2016, and they have already been assigned classes for the next year in the new building. I wish you could have seen their faces light up when I had the fun of telling them the truck was leaving for Pochalla within a week with the building supplies on it! They were so excited! They told me this is what they had been hoping for—to have the building finished when they return to Pochalla in December. These young men keep telling me that “God will take care of them” and that “God knows our needs.”  A reminder that we often need!  They also text me about once a week wanting to know if the truck has arrived, if Lynn is in Pochalla, and what the progress is—I love their enthusiasm!

We had the joy and honor of being at the ordination of a woman pastor. Paska has been a pastor in training for longer than is usual, but the fighting that started in 2013 caused many things to get pushed back.  This was a wonderful day for her congregation and for the church as it gained a wise and humble leader. 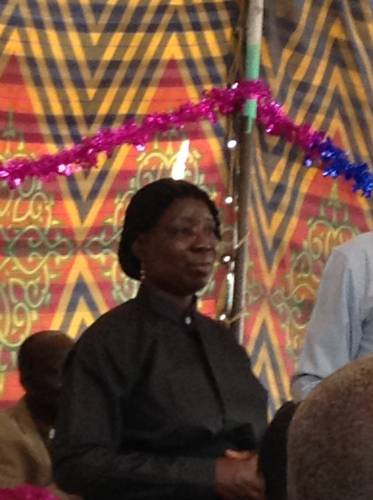 Please continue to pray for the people of South Sudan. There has been renewed fighting in several areas with many lives lost. Pray for the leaders of this country that they might put the needs of the people first. Give thanks that more people are returning to South Sudan and that the churches here are actively working together for peace.

I wish I could convey to you how much your prayers mean to us. Knowing that so many of you are praying for us and the people here gives us the strength to keep on going.

As you know, we will be in the States for May, June and July, and we are looking forward to seeing many of you. We will be at the New Wilmington Mission Conference in Pennsylvania the last week of July and hope to catch up with many of you there also.

Thank you for the financial gifts you have given and continue to give. This really is a partnership with all of you! There is a real need here and only through your giving are we able to help fill the gap.

We were having supper by the Nile River a few nights ago and I could not help but hum the song “When peace like a river…” as I sat there and watched the mighty river flow by. The Nile River is a constant source of water, travel and food for the people. We do not always see the current but we know it is there. We know that God is there and is the source of all things for us. We trust in the “current” of God’s love.

Blessings to all and see you soon!
Lynn and Sharon Kandel