Ji Yeon and Myoung Ho are periodically in the United States. Email them to learn about their schedule and invite them to visit your ministry.

About Myoung Ho and Ji Yeon’s Ministry
Myoung Ho Yang and Ji Yeon Yoo began serving in team ministry in Chiang Mai, Thailand in October 2021, where Myoung Ho will be teaching at the McGilvary College of Divinity of Payap University as Professor of Worship. Payap was founded by PC(USA)’s partner, the Church of Christ in Thailand, in 1974 and is the first private university in Thailand, serving about 3500 students with 600 faculty and staff. About 10 percent of the students and 30 percent of the faculty and staff are Christian.

Country Context
“Thai” means “free,” and Thailand, known as Siam until 1939, prides itself in being the only Southeast Asian nation that was never colonized by a Western power. In the 1980s, its economy changed from one based primarily on agriculture to one more focused on the industrial and service sectors. The economy’s fast growth sent a substantial number of people from Thailand’s rural areas to urban centers. More than half a million Thai people are living with HIV/AIDS, a high rate of infection that is partly the result of a large-scale sex industry. Nearly 95 percent of the population are Buddhist, 4 percent are Muslim, and fewer than 1 percent are Christian. Presbyterians began mission work in Thailand in 1840, and Presbyterianism is one of the Protestant traditions that helped form the Church of Christ in Thailand (CCT). While the CCT’s membership is relatively small, its work in health, education and social ministries is widely known and appreciated.

Its lyrics come from Habakkuk 2:14: “For the earth will be filled with the knowledge of the glory of the Lord as the waters cover the sea.” Its rhythm beats with their passion to do God’s will.

“It has long been our prayer and desire to serve as an instrument of God’s mission,” Myoung Ho says. “The words in Habakkuk have been our song.”

A call to prepare for mission service prompted their move from South Korea to the United States in the late 1990s. Myoung Ho enrolled in theological studies at Gordon-Conwell Theological Seminary in South Hamilton, Massachusetts, where he earned an M.Div. degree. Sensing God’s leading to the ministry of teaching, Myoung Ho pursued doctoral work at Drew University’s Theological School. He completed a doctorate in liturgical studies in 2009.

The road to mission service has been a long one for Myoung Ho and Ji Yeon, but they say God’s providence guided the journey. “We believe that God has opened the door for us to do this mission service in God’s perfect time,” Myoung Ho says.

Having made the transition from Korea to the United States, Myoung Ho and Ji Yeon acknowledge crossing cultural boundaries can be difficult. However, they also see the opportunity to live and minister in yet another culture as a reason to celebrate.

“Cultural differences are challenging, to be sure, but at the same time, it is a joyful thing that we can learn and enjoy the diversity of life,” Ji Yeon says. “We are grateful that God gives us an opportunity to live cross-culturally and share the love of God through our ministry.”

Myoung Ho comes to mission service with experience as a pastor, professor, and worship leader. He has been worship pastor at two congregations, Pilgrim Church in Paramus, New Jersey, and Sandol Presbyterian Church in Pine Brook, New Jersey, and pastor of the Korean congregation of Westminster Presbyterian Church in Manchester, New Hampshire. He has taught adjunctively at New York Theological Seminary, the Theological Seminary of New Jersey, and Georgia Christian University. Prior to moving to the United States, Myoung Ho earned a B.A. in accounting from Chung Ang University and an M.B.A. in international business from Yonsei University. He is a teaching elder and member of Eastern Korea Presbytery.

Since high school Ji Yeon has sensed a call to serve in cross-cultural mission. She has been involved in ministries of hospitality and Bible teaching in the churches her husband has served. Immediately prior to entering mission service, she attended the Presbyterian Church at New Providence, New Jersey.

“We hope the church will shine the light of the truth and play an essential role in the coming of the Kingdom of God in the world by living out the Word of God and actively engaging in world mission,” Ji Yeon says. 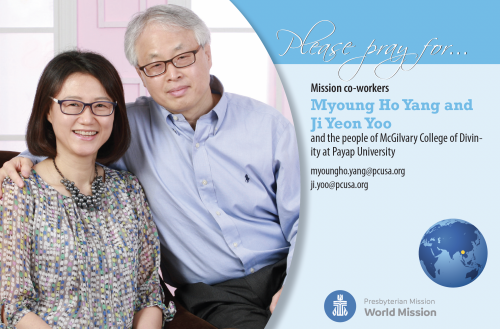