A letter from Myoung Ho Yang serving in Hong Kong

Individuals: Give online to E200521 for Myoung Ho Yang and Ji Yeon Yoo’s sending and support

Congregations: Give to D507584 for Myoung Ho Yang and Ji Yeon Yoo’s sending and support

We hope each one of you enjoy the amazing presence and overflowing grace of God every day.

As many of you already know, Hong Kong is one of the most densely populated places in the world. It is a very small place filled with lots of people. Most apartment buildings are very tall but their rooms are small. Accommodating the sheer number of people here requires creative planning.

It’s no wonder, then, that there are not enough places for the dead to be buried and waiting lists of applicants desiring burial chambers for their ashes are very long.

There is a big cemetery in the middle of the city. Sometimes I pass by it when I am riding the bus. I once experienced a cultural shock when I first saw a cemetery located in the downtown of a US city because all cemeteries in Korea are located in a remote place, especially mountainous areas. Koreans don’t feel comfortable living near a cemetery, and as I grew up in South Korea, I shared this discomfort. It seems that people living in Hong Kong in the early days felt similarly. In those days, the city’s central area was remote. Its marshy environment caused disease and death and eventually became a burial ground. Later, this area was euphemistically renamed “Happy Valley” because people wanted to shun negative thoughts related to death and burial. Whenever we pass by a cemetery, we are reminded that we are only finite beings and must leave this world someday.

Cemeteries also offer us the chance to read history. Since this cemetery was established in 1841, people from various backgrounds have been buried here. Among them are soldiers killed in the First and Second World Wars, political leaders, influential scholars, well-known governors, and businessmen. I was very much interested in this place not because of these notable people, but because of those who came to Hong Kong and China as missionaries in the early days. I wanted to feel their breaths and hearts. So, I visited with a couple of my students. 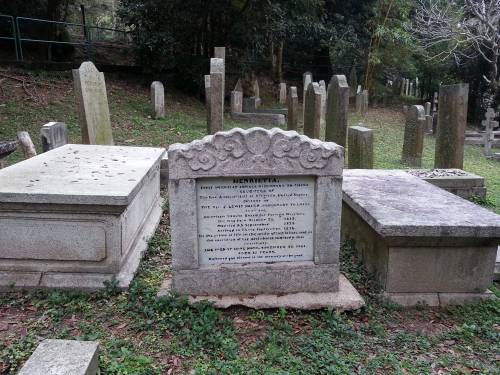 This cemetery is called the Protestant Cemetery because it was originally a burial ground for Christians. It is here that many of Hong Kong’s 19th and 20th century missionaries were buried. Among them are foreign missionaries who came to this hot and humid city, faced difficulties in adapting to its tropical weather, and died without receiving timely and proper medical treatments, in part due to lack of sufficient medical knowledge and technology.

I saw the tombstone of Henrietta, the first American female missionary in China, who came to Hong Kong in 1836. Eight years later, she died at the age of 28. I read the gravestone of another missionary who died from endemic disease at the age of 24, only a year after he arrived in Hong Kong. And I read the epitaphs of a little baby and her mom, both of whom died less than one month after they came to Hong Kong.

As I walked among those tombs, read their epitaphs, and imagined how difficult and how lonely missionaries would have been as foreigners in this alien environment, a testimony that I heard from a pastor came to my mind. He traveled in Asia Minor following the steps of the Apostle Paul. A long bus journey was not easy for him. It was uncomfortable and inconvenient. But just when he was tempted to complain, he thought of a couple of images of the Apostle Paul walking on a long, rough road for countless days. The pastor was traveling on a bus for only a couple of hours. At that moment, he was deeply moved and began to shed tears. As I recalled his testimony, Paul’s testimony in his letter to the Church in Corinth came to mind. He wrote:

Missionaries in Hong Kong and China in the early days must have encountered difficulties, pains, and sufferings similar to Paul’s. But their passion and love for Christ planted seeds of the Gospel even at the cost of their precious lives. Those seeds have grown into big trees still bearing fruits in the fields of China. We are greatly thankful for their sacrifices that paved the way for the mission works of the later generations. I believe it is God’s blessing that you and I can join in this work of the ever-expanding kingdom of God in this time of God’s history.

Jiyeon and I deeply thank you for your prayers and support that make it possible for us to continue this ministry of equipping spiritual leaders of Hong Kong and China. Please continue to walk together with us through your loving prayers and financial support.

In Grace and peace of Jesus Christ,